How Many Shades of Gray? 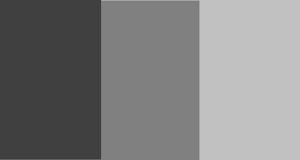 Resolution mechanics are a lot like grading scales. Some are simply pass-fail, some have a few levels like letter grades, and some are even more granular like percentages. In this article, we’ll take a look at some of the strengths and limitations of various levels of resolution. It won’t be an exhaustive, academic survey of every possibility. Rather, it will be a chance to think about success, failure, and what happens in between. If you ever decide to design your own system (or modify an existing one), you’ll definitely have to consider the question of granularity.

PASS-FAIL
Call it the binary option. Either you succeed or you don’t. Many systems use a pass-fail system for attack rolls, skill checks, and saving throws. It’s simple, easy to teach to new players, and pretty direct for the GM to adjudicate. There’s little room for player complaint: either the dice cooperated or they didn’t. It’s also traditional and familiar, which is great for folks who are returning to the hobby.

However, it does have some limitations. The consequences of failure can often be quite harsh. A failed saving throw versus poison can end an adventuring career real fast. (This may be a feature or a bug depending on your preferred play style). Even if a bad roll isn’t deadly, it may still slow the game down. For example, suppose a party needs information from a town guard in order to continue the adventure. A failed negotiation roll means they get nothing. Now, a clever GM will work around this, but the rules as written don’t provide the wiggle room.

THREE TIERS
A number of games use some combination of three resolution levels. The example that we’ll consider uses Failure, Partial Success, and Success. There are others that shift the titles around including critical success (or critical failure, yikes!), but we’ll limit ourselves to this one. Let’s look at our previous examples again.

Suppose you almost make your saving throw versus poison. If you are in the Partial Success range, you don’t have to die. Maybe you take damage or another penalty. This keeps you in the game, and even adds a little realism. Not everything is black and white, not everyone dies even from venomous snake bites.

Now let’s talk to that guard again. If you can get a Partial Success, maybe they give you at least some useful information. Then you can move on from there, even if you didn’t get everything you wanted. A three tier system adds a bit more variety to each roll.

If you’d like to try a three-tier system, you probably don’t even have to switch games. Just consider awarding a partial success if the players roll with about 25% of the needed number. (Use more or less than 25% to taste). Suppose they need a 15 to succeed when rolling a d20. If they roll in the 10-14 range, then they have a partial success. In combat, you might decide that a partial success is at least a nick and does 1 or 2 points of damage. Hey, that might even take out a kobold.

A three-tier system does have some baggage. It introduces more complexity into every roll. GM’s will need to consider the results of partial success rolls during prep and will have to be able to adjudicate on the fly. GM’s will want to take some notes about how they ruled on common partial success situations to ensure consistency. A three tier system may also be more confusing for new players.

FOUR OR MORE
Some systems are even more granular, including four or more levels of resolution. The first Prime Directive game had Complete Success, Moderate Success, Minimal Success, Failure, and Botch (whew!). This can add even more tension and realism to each dice roll. In combat, each level of success can be linked to the damage dealt. This may even eliminate the need for a separate damage roll. Also, you won’t have the frustration of rolling a 1 for damage after hitting with a natural 20. We’ve all been there.

Obviously these levels add more complexity for both the player and the GM. More possibilities must be considered during prep and play. Such a system will be more difficult to introduce to new players. Also, if you are designing your own system (or tinkering with an existing system), you’ll need to consider the issue of diminishing returns. For example, are you really getting that much more out of having both Moderate Success and Minimal Success? There’s no one right answer for all GM’s, but just consider whether you are making your life harder or easier down the road.

CONCLUDING THOUGHTS
The purpose of this article isn’t to sell you on any one option. If you are happy with the levels or resolution in your current game, play on! However, it’s always worth the effort to see what else is out there, to see if there is anything you’d like to port over. Also, you can always file the thoughts away for when you finally write that system of your dreams. I’m no different than you: I have my heartbreaker all set to go.

How about you? What level of granularity do you prefer? What other considerations can you add to this article? Let us know below.

12 Responses to How Many Shades of Gray?