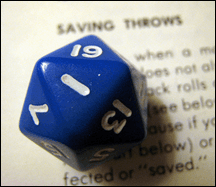 Have you ever had this happen at a game?

“I roll to see if I know anything about ancient ankthyrian architecture and where they might have hidden a secret door. Crap, didn’t get it. Let me just try that again…”

or what about this golden oldie?

“Ok, we want to avoid a fight. I’ll try to talk them down since I am the only one who knows their language.Â  Crap. If they don’t immediately attack, can I try it again?”

So that is the hot button for today. When do you allow players to reroll actions? Does it depend on the type of action? Physical, remembering something, diplomacy? Does it depend on the fail scenario? What about when the players are in a jam and really need to get a win scenario? Will you let a reroll occur then, even if you haven’t before? Do you consider the reroll a separate action? What if enough time has passed between rolls for something like remembering info or figuring out a puzzle, will you allow a reroll then?

To me, this is one of those issues right up there with fudging the dice as a GM. I’ve got players who will try to push the bounds and reroll anything. Other players will consider themselves doomed and walk themselves to the guillotine, even when I would have given them a chance to work their way out of the situation. Like so many questions and issues, I find this very subjective. So how does it play at your table? What issues do you have with it or what situations will you absolutely disallow it in? When do you consider it acceptable to reroll a failure?