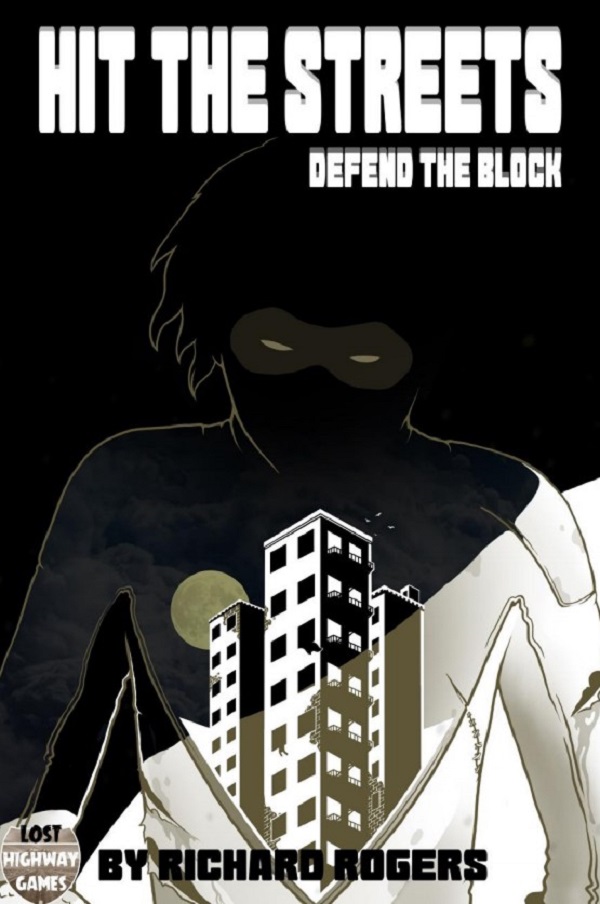 Superhero media contains multitudes. There are tactical, military-themed super-agent teams. There are magical heroes that fight off demons and vampires. Some heroes travel into the depths of space and deal with alien fleets and cosmic criminal syndicates. But for many people, their first introduction to superheroes are those heroes fighting the street level battles.

The game we’re looking at today, Hit the Streets: Defend the Block, is a game meant to emulate stories where heroes are defending the city they live in against street-level evils, corruption, and exploitation. This is a game for emulating Daredevil, Jessica Jones, The Question, or Wildcat. 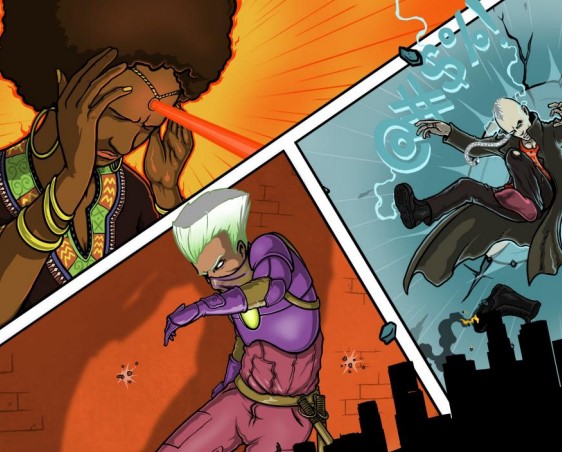 This review is based on the PDF release of the game. Currently, it is available [1] as a PDF or as a print on demand release. The PDF is 108 pages long, with four pages of credits and playtester acknowledgments, five rules summary sheets, a character sheet, a dedication page, and a three-page table of contents.

The layout is a single column, with a heavily shadowed border, showing the silhouette of a cityscape from different angles. There are various full-color images of different street-level heroes displaying a variety of superpowers, and various boxes with highlighted topics are formatted like comic book narration boxes.

The introduction establishes what this game is about. It specifically calls out the Marvel Netflix series as foundational for this game. Characters don’t fly, they don’t move mountains, and they are mainly concerned about the city and the neighborhood they live in.

In addition to establishing the tone, this section introduces the terms that the game will be using. The player moderating the game is the Game Manager, and character heroes are known as Super-Powered Beings.

The introduction also makes it clear how important safety is to the game. Looking at the inspirational material, and the fact that street-level crime-fighting often deals with lots of topics like class warfare, economic disparity, drugs, violence, and abuse, games can easily stray into topics that might cause some emotional harm if not addressed.

The safety section looks at Lines and Veils, the means by which players establish their comfort level with different topics. It discusses active safety tools, specifically citing the X Card as an example.

This section describes how characters are built, and how actions are adjudicated. The core game system uses d6s. Above a certain number, the roll counts as a success. Below a certain level, it counts as a failure.

Characters get a certain number of dice to assign to their mundane actions and their super actions, essentially establishing if the character is better at their day-to-day life, or their superhero identity. Other dice ratings are assigned to different superpowers, with a few examples given.

Players then assign a number of dice to their stats, which include:

That means your dice pool for attempting a task involves adding either your Be Normal or Be Super dice to one of your stats that matches up to the action you are attempting, and the dice for a power you are using, if any.

Characters have a resource called Spark that determines if a character can remain active in the narrative. Spark may be the ability to push through physical injury, or it might be your will to go on, depending on the situation. You can lose Spark on failed rolls and spend Spark to add extra dice to your dice pool, and certain actions allow you to regain Spark.

The chapter ends with three example Super-Powered Beings. This gives the reader some examples of what a fully assembled character looks like in the game. 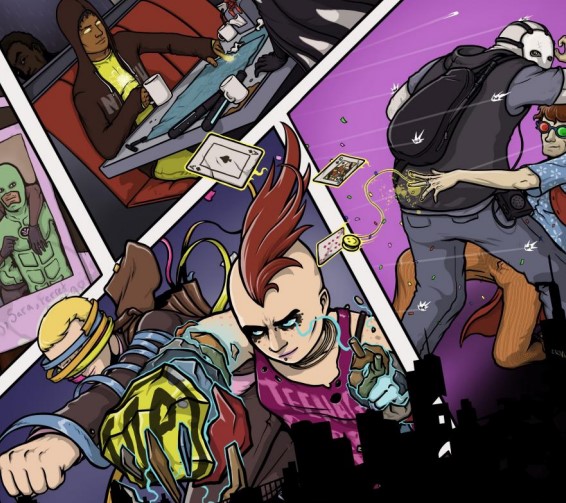 This section provides a set of questions that the group should be asking when they develop their team. It also points out that depending on how the team develops, players may need to go back and modify some of their character choices to better fit the team’s dynamic and theme.

There are example tables for things like team names, purpose, and rivals. This section introduces the importance of having a recurring rival team. The rivals don’t need to be villains, although they may be. The rival team is just a recurring group that will cause problems for the player character SPBs.

This section outlines a process for creating a unique neighborhood for the game. This involves drawing lines to represent streets, allowing characters to place various locations.

There are also several questions to help the group determine what people live in the neighborhood, and what the ongoing problems are for the neighborhood. In addition to explaining the process of creating streets, problems, and locals, There is an example to show what an emerging neighborhood looks like, generated by this process.

This section goes into more detail to show how to structure and resolve actions in the game. Depending on what the stakes of a task are, a scene either has Tension or it does not. When a scene has Tension, a character can lose Spark when they generate failures.

The resolution system is player-facing, so the GM doesn’t roll to see if rivals or opponents are successful. The GM just determines the difficulty of a task (how many successes are required), and if there is Tension in the scene.

Some threats have a Total Threat Difficulty. Threats with this quality can be incrementally achieved, rather than being determined by a single resolution, to represent a major catastrophe or a powerful villain.

Characters may also take part in a Refresh Scene between other scenes. In general, Refresh scenes usually involve either spending time with other team members, doing charity work, or going on patrol. Because these patrols are about stopping “mundane” crime, these scenes don’t involve Tension.

There are charts showing what kinds of crimes might be happening in the neighborhood, as well as providing an impressive and interesting list of actual charities that often operate in urban neighborhoods.

This section is rounded out with a series of questions for determining XP awards, the cost of awards, and what happens when a character runs out of Spark in the game. Without going into too many details, the character might die, if the player wants them to, but it may also just be an opportunity to do some soul searching. 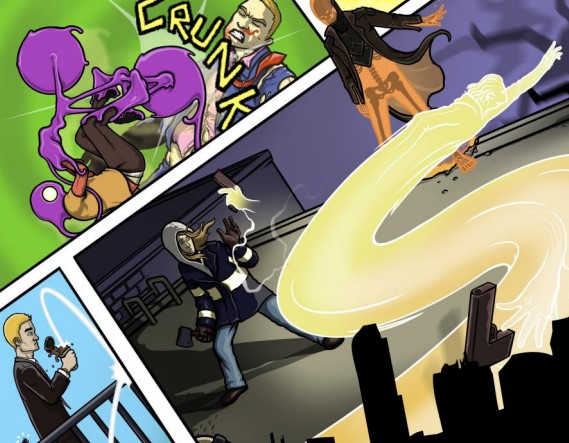 How to GM Hit the Streets

This section starts with multiple examples of questions that the GM can ask to get more details about characters, the neighborhood, the team’s rivals, and emerging aspects of the story in the game.

There are also several pages dedicated to the process of “Letters to the Editor,” an end of session process for getting feedback about what the table liked about the current session, what they would like to see in the future, and what might have been less satisfying.

Additional sections include treatments on troubleshooting potential problems, and advice for addressing game themes. There are tables determining corruption and temptations that are acting on the neighborhood, and day to day “be normal” problems of characters to address.

This section gives six example neighborhoods. While much of what makes this game unique is derived from the players working together to establish the setting, these are good examples as well as handy settings for convention games, one-shots, or short campaigns.

Why Don’t We Start By Getting Some Coffee First?
Â All these components seem to create a strong engine for driving content in play.Â

I love the idea that Spark is about the will to go on as much as how tough a character is physically. I also really like the neighborhood building rules, the concept of the rival team, and the idea of the Refresh Scenes and how important charity work is to the people of the neighborhood. All these components seem to create a strong engine for driving content in play.

I’m Asking Forgiveness For What I’m About To Do

Not much was unsatisfying to me about this game. Some terminology choices are thematic, and may not be what I would have chosen, but in the grand scheme of things, that’s pretty minor. The only other thing I would note is that while some rules address taking on a major, climactic threat or heavy hitter super villain, there is a lot more time spent discussing the rival team (which is a great concept, don’t get me wrong), than there is developing strong, long term villains. This is a little strange when the source material includes characters like Kingpin or Killgrave.

If you like more story-based games, and you also like street-level comic book stories, this is a very easy recommendation. I would also argue that in addition to being a good game to play, the support for fleshing out neighborhoods, rival teams, and daily problems form a great toolkit that can be applied even to other supers games.

Where is the line you draw between street-level heroes and other superhero stories? What is the deal-breaker when it comes to themes, powers, or background? How do you feel about mixing and matching street-level characters with more epic heroes? We want to hear from you in the comments below.