Our self image as a people of leisure is a little skewed. The industrial revolution was notorious for twelve hour days, six days a week, of tireless, dangerous, back breaking labor. So it makes sense that we’ve finally transcended that– we have the 40 hour week and most people are scheduled for two days off a week. That’s more than ever before, right?

Not really, it turns out. I was recently reading with the history channel on in the background when a show came on that sucked me in. Let’s look at foods and holidays that you can borrow for your game. 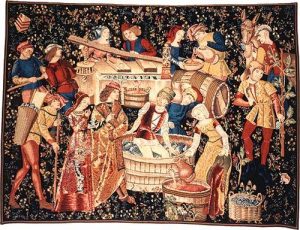 The show’s representative medieval village got every Sunday off plus 60 holy days a year. That seems pretty comparable to many modern American’s Saturday, Sunday and 8 holidays per year. They varied– many celebrations were local to lands around a specific cathedral or monastery, while the largest festivals were constant across all of Christendom, which made for common experiences throughout Europe.

What you ate varied throughout the year, based on what was harvested and still available. Much of the peasant diet was based on filling grains, like barley– often in the form of beer (for calories and because the water was untreated) and pottage. Peas and beans were the primary source of protein for peasants– they didn’t have access to a lot of meat. Most peasant dinners were pottage: berries, nuts, grains, and various veggies stewed together. If you were lucky, you might have some salted meat or bacon to add, but it was rarely available to poorer peasants. The miller’s services were expensive, so bread was often skimped on.

Wealthy merchants and nobles had access to better breads (made with wheat) and meat was much more common at their tables. Spices were rare, particularly before the crusades brought them to more people’s attention. For your game, spices can make a light– and consumable– type of wealth. Instead of packing heavy gold coin, consider hauling packets of pepper between towns!

If you’re particularly ambitious, you can borrow recipes from reenactment sites (like the SCA, or your local Renaissance Faire site) and cook up a period feast for the players in your group.

Honestly, Roman foods sound tastier to me than most medieval foods, despite being further away in time. Aurlaea’s article about ten foods by ancient civilizations mentions the roman breakfast. Their breakfast consisting of porridge, dates, honey, and pancakes is one I’d love to eat today. History for kids has links to localized food pages, illustrating differences based on income and location. 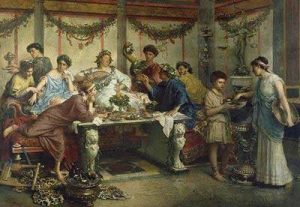 Wikipedia’s Roman festival page has a great listing. Notice how many week long (and longer) festivals of games there were, in addition to the over 40 individual holidays. Historians point out that it was only the rich in the city who got to celebrate them all– but in the countryside many of the days involved at least a feast, even if you had to work instead of getting the day off. Many of the holidays were local: if no one in town worshiped a god, there wouldn’t be a place hosting a feast.

The other thing to keep an eye on is the accumulation of holidays over time, which means more and more holidays were on the books the later into the empire you go. There were far fewer holidays early in the republic, before conquest added new gods to the pantheon and Emperors needing their names glorified hadn’t begun twisting the calendar. 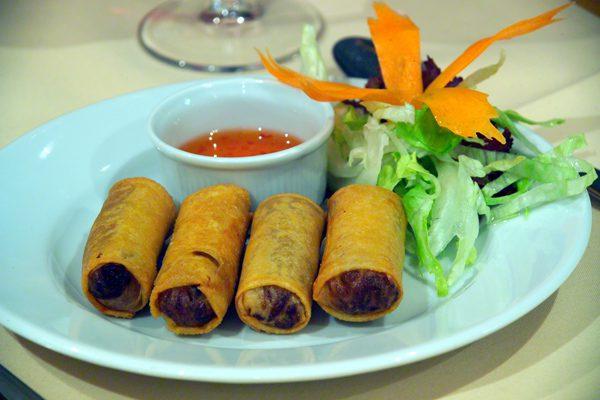 Another easy way to borrow is across space, rather than across time. Travel shows are great at showing different takes on foods, though a trip to strip malls around town can be just as eye opening. You can do a lot of different things with the same ingredients: Asian noodles often look quite different from Italian pastas, despite the common ingredients. Once you add the different toppings: chicken in a curry broth, spaghetti sauce, or finely chopped duck, no one would ever recognize the common platform.

If you’re looking to really vary dishes, watch something like bizarre foods. Freshly fried dung beetle, fermented fish, cooked rats, or a cow eaten warm during the butchering can give your culture a very exotic feeling. Poor fare like cooked rats might be a sign of poverty, a holdover from a time of famine, or just a cultural quirk like lutefisk.

Unless you’re playing in the historical world, you’ll probably have to adapt the diets to match your world. While in our world, tomatoes and potatoes came late to the diet (because they were from the new world), your world may have a very different distribution of foods– or you might be playing in the new world.

Technological change is common in games: the introduction of gunpowder, a new type of armor, the dispersion of wind mills and water wheels, or even a new enchantment can change the game dramatically. Introducing a new food or spice can change the feel of an area too, and while it could lead to dramatic changes (witness the widespread adoption of potatoes in Ireland), it won’t affect the numbers in the system. Introducing a new food, or finding a shorter (if more dangerous) route to the valuable spices, can be ways to incorporate food into your adventure planning.

You know the advice to incorporate more senses into your game? Remembering to describe the roar of a troll and the buzzard’s eye view of the battlefield are easy ways to add more sensory input– but smell and taste are often harder to incorporate. (There are only so many piss stained alleys characters can head down before it becomes repetitious.) Remember meals and festivals, and you have a feast for all of the senses.

Research is fun and easy: kids sites can give you a quick overview, as can wikipedia and google searches.

Two late additions: How foolish was it to miss the fact that today is Cinco de Mayo? Cinco de Mayo has its own rapidly growing traditions– today’s paper called it A Cousin of St. Patrick’s Day. Parades and tasty food– very much a modern festival. Hit your local celebration and call it research!

Second: Please chime in. What was the last festival you used in your game? Has food played an interesting part in your games? How do you work it in for your group?

9 Responses to Historical Food and Holidays