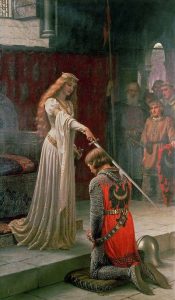 A few years ago, I was running a game in the midst of a deep dungeon delve. As things go with these delves, a character in the group died. The character had hired a faithful hireling and dutifully kept him alive. The hireling was more than just a backpack-carrying torch bearer. The PC treated the NPC as more than a stat block that existed to reduce his encumbrance.

I’m not entirely sure which of us came up with the idea, but we agreed that the hireling would gladly take up the fallen character’s sword and shield to carry on with the dead character’s quest. We reasoned the hireling felt like part of the family and also had a strong sense of loyalty to the dead character. However, we had an issue with the hireling being the “typical zero-level human” and the rest of the group standing somewhere around 5th or 6th level. How were we going to balance out the power level?

Here’s what we did to turn a hireling into a hero.

During my meeting with the player, we hashed out a quick backstory to fill the blank pages of the hireling’s history. We decided he had joined the group to gain the necessary experience to be accepted into the ranks of the standing army. The hireling’s end goal was to gain enough martial prowess to avenge his father’s murder. While talking about the history and family, I had an idea for the dead character’s sword. I didn’t reveal my idea to anyone until the next session, which both surprised and pleased the player.

We did a bit of hand waving and determined that the dead hero and the hireling were of similar body build and size for the hero’s armor and other gear to fit the hireling properly. When the hireling picked up the fallen hero’s sword, the weapon spoke for the first time. It came to life and greeted the hireling with pleasure and humility. I’d decided the sword was a lost, ancestral weapon of the hireling’s family that happened to be intelligent as well. The sword was so overjoyed that it had been found by a “proper heir” it unlocked its hidden powers for the character. Along with the armor, shield, miscellaneous gear, and such, the addition of intelligence to the sword helped equalize the hireling and the rest of the party a quite a bit. The player running his new character was overjoyed at this turn of events he’d not been expecting. The rest of the group was equally happy with how this went down as well.

During our brainstorm session, the player and I agreed to “boost” the hireling to 3rd level given that he’d been with the party for quite a long time and had survived a ton of adventures with the group. It was only fair (and added balance to the game) for the new character to come in slightly lower than the rest of the group, but not at 1st level with zero experience. He had originally asked to be one level lower than the rest of the group. The compromise at 3rd level made us both happy.

Something I haven’t mentioned yet was the fact that the dead hero was a paladin. While the player thought it was hokey for the hireling to step into the paladin role instead of the fighter role, I proposed something to him. We hashed out the details and finally settled on a plan of action. While the hireling respectfully pulled the dead paladin’s gear from his corpse, the hireling prayed to the appropriate god for the paladin’s soul to find peace. When he pulled the holy symbol from the paladin’s neck, he issued a promise to the god to return the symbol to a worthy representative of the church. At this point, a disembodied voice answered his promise with, “If you choose to take up my mantle, I will deem you a worthy warrior for my cause.” We then role played a “conversion” to the paladin’s religion for the hireling, which was the final step in making his a true hero to stand at the side of the rest of the party.

Because the hireling (now a hero in his own right) had been a faithful companion to the rest of the party, there was a camaraderie already in place. None of the awkward “meet ‘n’ greet” roleplaying had to take place. They all knew each other. Yes, they had to learn more about each other during the course of the adventures, but he turned out to make a fine addition to the rest of the group.

In the end, the player was very happy with the turn of events. The rest of the group thought it was a wonderful way to introduce a “new” character into the fold. I was relieved because I didn’t have to contrive or delay the introduction of a new character into the group. It worked out well for everyone. Now that I’ve told my story of turning a hireling into a hero, what would you have done differently? I’m certain folks out there have their own angle on this concept, so I’d love to hear what you have to say in the comments.

9 Responses to Hireling to Hero