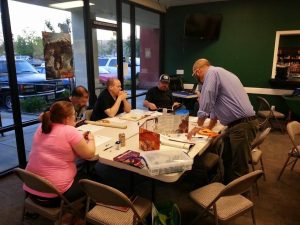 If you’d asked me 10 years ago about what the future held for my GMing style, I doubt that I’d have been able to guess at a future filled with public play, steady home plus ad hoc game groups, and lots of convention and other one-shot game play. At the time, I rarely attended more than a con a year, and was only beginning to check into the meetup scene for gaming. In my old world, scenarios were artisanally hand made–crafted for one group, usually as part of an ongoing storyline, each session rarely making sense out of context. The idea of reusing, much less mastering, a scenario for play with more than one group just wasn’t a part of my thinking.

What do you mean by Hip Pocket Games?

Sometimes, these games are full game systems, like A Penny for My Thoughts, which is a GMless game designed for a single evening’s play. Other times, they’re specific scenarios, like Secrets of Sokol Keep (a D&D 5e scenario), or Dark Star, the Fate adventure (and setting).

Any game that you can run with minimal prep is a good hip pocket game for you. You’re basically taking something big and amorphous, like everything a D&D game can be, and mastering a specific version of it. When you meet someone new or attend a con, you can leap into play and always be ready to contribute. It’s much like having a board game in your backpack that you love and can teach effortlessly.

When I just ran campaigns, the idea of running an adventure again seemed ludicrous. I might run a game for my group to test out a con scenario, then run the scenario at the con, but that was rare.

When I learn a new roleplaying game, I pay careful attention to the rules for the first few games, to make sure that I don’t slip up and to learn the underlying logic. Now that I’m running adventures more than once, I pay similar attention to scenarios that I enjoy, and mentally dogear them for a future run.

Any game that you can run with minimal prep is a good hip pocket game for you. You’re basically taking something big and amorphous, like everything a D&D game can be, and mastering a specific version of it.

Just like shaking down a new RPG, scenarios get easier and more consistent when you return to them. If one of the pregen characters wasn’t engaged the first time you ran it, you can keep tabs on the character and be ready to bring them deeper into the game. Or, when you’re presenting characters for selection, you’ll know to emphasize the parts that tie into this scenario. You can even take the opportunity to retool a scene to emphasize a skill that the character has, or to alter an NPC in the adventure to have a deeper tie to the character when you run it again.

Running a game is one of the most foolproof ways to find a logic hole. If the players have to look to you for guidance in the first play through, you know which clues and scenes to emphasize in your presentation during future plays to help keep the characters on track. Like so many things, practice makes perfect.

A couple of years ago, I ran A Penny for My Thoughts three times in October, with different groups of players. By the end, I felt like I could guide the group well–and like the games that we created after the second or third play were better. In part, that’s because of several players’ repeat play, not just mine–the first time you play Penny, the lack of constraint is awesome, but the same lack of constraint can suck you into a gonzo story.

Over the last few months, I’ve mastered a few more scenarios. The first came about because I decided to run my Stellar Eagle scenario for Kingdom at Gateway and again at Zappcon. Like A Penny for My Thoughts, it’s also diceless and GMless; the struggle is that it’s hard to get both character building and a lot of play in a con slot. The Stellar Eagle seed was itself a refinement from trying to squish the great Starfall seed into a four hour con slot; it turns out that the world building is all too easy to get lost in, leaving too little time to explore the world and characters that you created.

The other scenarios that I’m now comfortable running with little prep are for more traditional games, with traditional GM duties and plots. The first, Mark Diaz Truman’s Dark Star was so good that I expanded it by breaking the pregen characters into blocks so more players could hop in. As I mentioned in a comment on John’s Limited Prep Time, Dark Star does a great job of mixing up challenge types and keeping the action moving. It’s a fun universe… and who doesn’t love Top Gun crossed with space?

The other scenario that I can run without much notice is DDEX1-2 Secrets of Sokol Keep. I’ve run it a couple of times at the store, a con, and once for friends. It’s a nice, straightforward scenario that has a lot of interesting elements. There’s some world exploration, a mystery to investigate, and an unusual dungeon to explore, and some good thematic fights. When I want to introduce someone to D&D, I can run Secrets of Sokol Keep and give them a taste of what D&D can offer.

What Games are in Your Pockets?

Do you have favorite adventures that you can run off the top of your head? A go-to scenario for introducing people to your favorite game world or RPG? Share your favorites in comments!