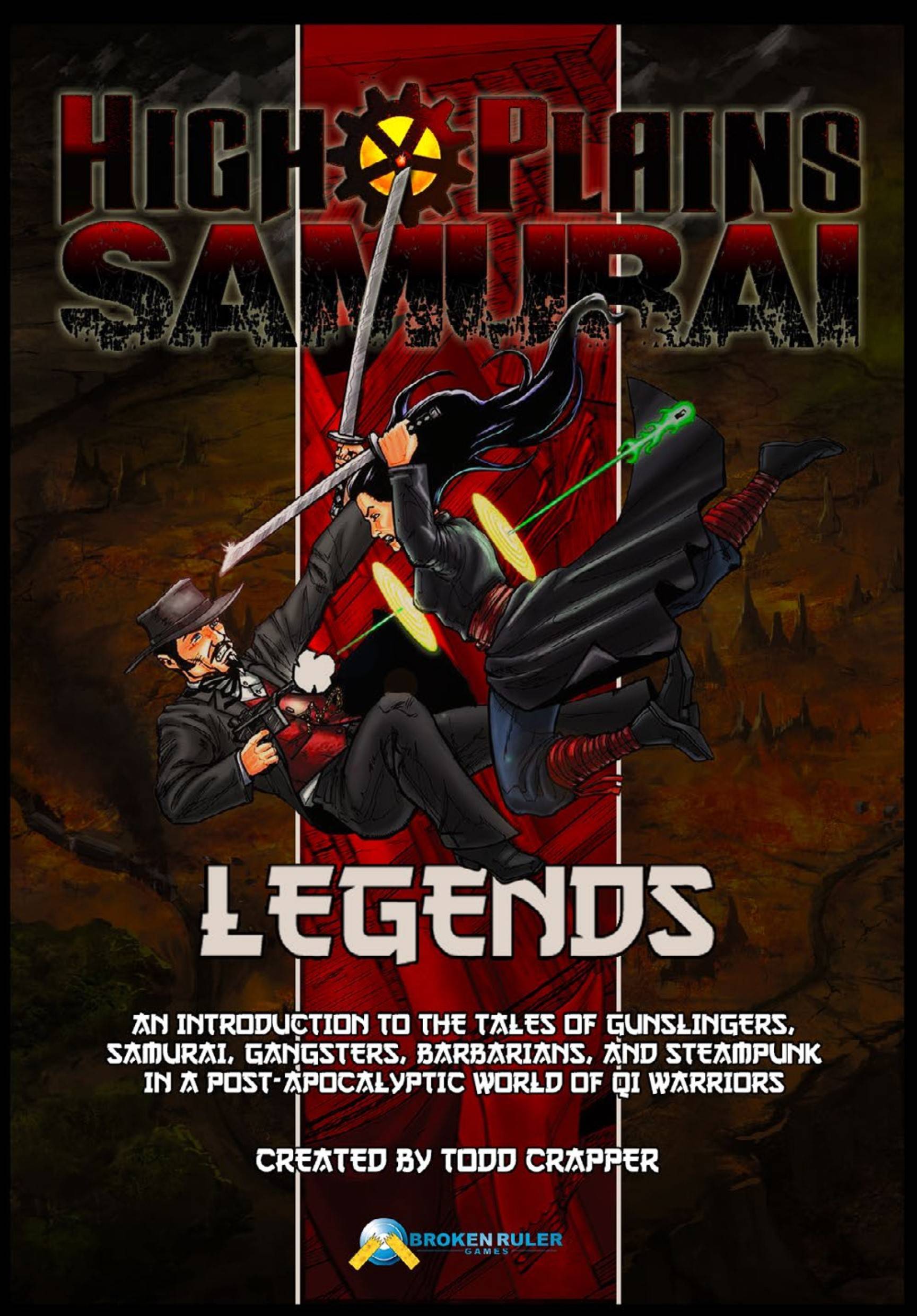 Genre mash-ups can be a great premise for a campaign. There are times when a genre doesn’t interest you all that much, but you understand it well enough that if there were just something “more” added to that genre, you would be all over running or playing a game in that setting.

In my case, I have enjoyed several westerns, but I’m not sure if I could run a western game without anything else attached to it. On the other hand, throw in horror or supernatural elements, and I start having a lot of ideas about how a campaign should play out.

Or, in the case of the game I’m reviewing this time around, take the western genre, add steampunk, samurai, wuxia, gangsters, and the post-apocalyptic genre, and you have something that catches my attention. High Plains Samurai Legends is the starter product for the High Plains Samurai roleplaying game coming later this year.

This review is based on the preview copy PDF of High Plains Samurai Legends sent out to the Kickstarter backers. I checked with Todd Crapper, of Broken Ruler Games, to make sure that nothing drastic would be changing from this version of the product to final release before writing the review.

The PDF is 82 pages long, including front and back covers, a list of Kickstarter backers, pre-generated characters, and the rule and setting information itself. The front and back covers are full-color art, with the interiors graced with sepia-toned line art, with bright red headers and black and white formatting throughout. There is also a full-color map of The One Land included in the document.

The artwork is well done and evocative, and the use of red highlights for the headers and tables is striking and attention-grabbing. 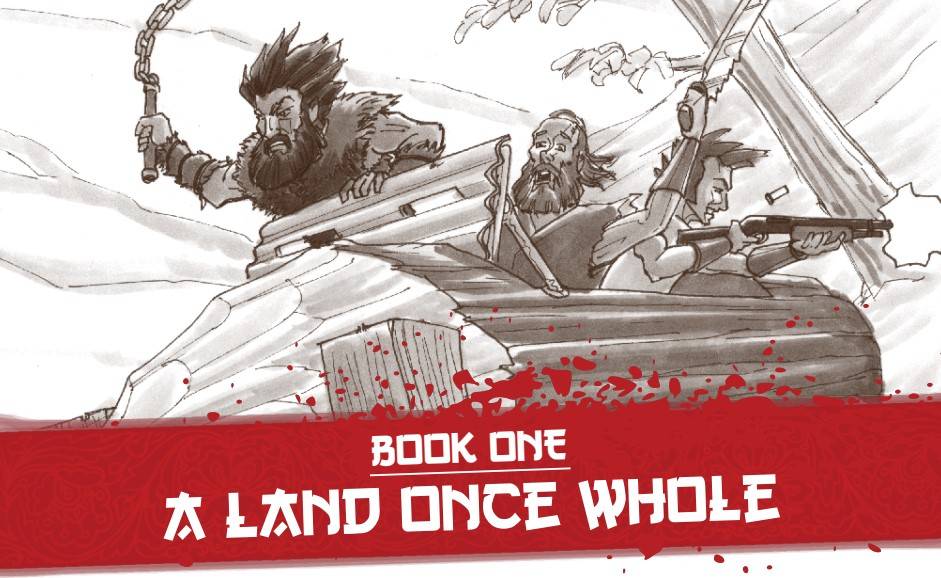 Book One: A Land Once Whole

The opening chapter of the book details the history of the setting and how it looks today. This is not our world in a dark future, but an alternate reality shattered by gods. The setting, as presented, consists of the Five Cities and the Wastes.

Several of the cities favor one of the core, mashed-up genres more than others. Rust is the steampunk city, for example, and Monsoon is where the samurai call home.

The history is very broad. It doesn’t give specific dates, or say much about the world before it was shattered. The final page of the chapter explains that this is an intentional design choice to give individual groups room to customize and add details as they want.

For me, it was enough detail to get my attention and begin to envision what kinds of adventures could be run utilizing the setting. It shows a nice, light touch, given how easy it would be to overload this chapter with details informed by all the different influences the setting draws from.

Book Two: How It Works

This section explains the rules used to play out scenarios in the setting. The rules are based on the Screenplay rules that are available separately (but without any implied setting). This game is a procedural narrative game, meaning that story elements are more important than any kind of simulation, but there are specific, defined ways in which story elements can be introduced. 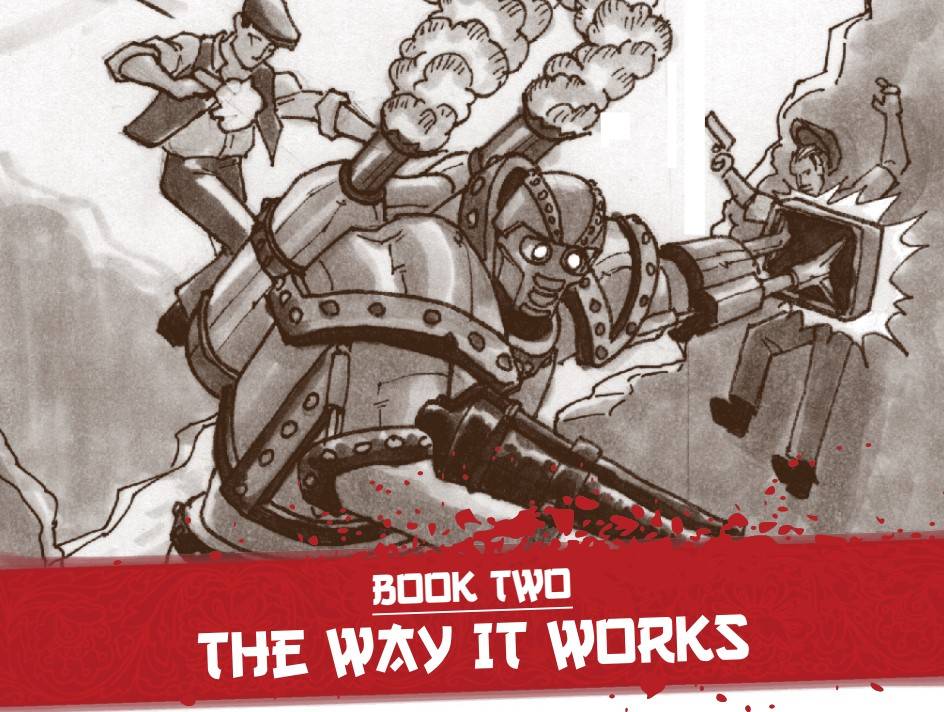 The game divides players into Writers and Directors. The Director serves largely the same purpose that a GM might serve in another RPG. Writers are each responsible for a Lead Character, which functions much like a PC in other games. Writers can also introduce supporting characters into scenes, assuming the Director doesn’t call for a Rewrite.The language of the game heavily favors terms used in television and motion picture production.

Characters are made up of several parts.

For anyone familiar with Cortex games, Potentials are similar to powers or attributes from that game, except that they also set a limit to the number of details a character can introduce on their turn, and they set a defense number when others act on the character.

Details are just that–they are how many items you can describe in the scene that then become facts. If those facts detail elements that were introduced by another player, they can call for a Rewrite. Most of the time, this means that a character can state that they accomplish something in the narrative unchallenged, but the Director can spend their complications to force a character to use one of their Potentials to roll against a difficulty to see if they avoid the complication.

When a character wants to remove another character from a scene, they can attack them, and attempt to remove their Vitality so that they can no longer participate in a scene. This involves rolling the potential die versus the defense difficulty set by the die step of the potential that the defending character is using.

Characters also have Resource slots. Resource slots are equipped at the beginning of the story, and if they are relevant to an action, they might grant either a boost to the die step of a Potential rolled, or a bonus to damage. Qi powers are “always on,” but if a character wants their Qi power to give them a specific benefit in combat or overcoming obstacles, it needs to be equipped in a Resource slot. The following things can be equipped as Resources:

When a character acts, they add a number of details to the scene, based on the number allowed by their Potential. If they need to roll the potential to attack, all their details should be used to describe actions or circumstances leading to the attack. The Potential represents how much a character can accomplish, so the die starts at the bottom and can go up to a maximum of the die rating. In addition, characters must use a detail to explain that they are using one of their Resources for it to be factored into a roll.

Now that the system clicks in my mind, I really like it, and want to see it in action at a table. It did take a careful reread to fully understand some of the rule interactions at play. While much of the system is very narrative in nature, there are a few throwbacks to more simulationist rules, such as specific bonuses from different types of cover, and between that and learning to translate the new terms and mapping them to game concepts, I was initially a bit lost. 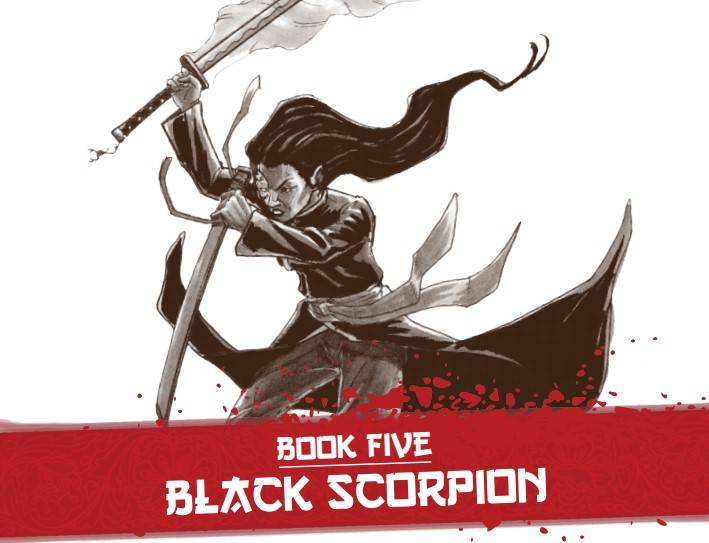 The next three chapters are starting adventures for the game. The specific scenarios are Showdown in Yung Zhi, To Catch a Train, and Black Scorpion. These adventures have a timeline, as in how long it should take to run various parts of the game at the table, a plot summary, key initiatives spelled out, and supporting characters.

Each one does a very nice job of explaining what is happening in the adventure, what triggers an encounter, what ends a scene, and how the story wraps up. This is done not just in the text, but with specific sections that call out triggers, goals, and what characters are in the scene, and with special highlighting and formatting to make it easier to see those key elements of the adventure.

I feel like all three scenarios do a good job of showing you what adventures look like in this world. Showdown in Yung Zhi is probably the most standard adventure of the three with a straightforward bounty hunting plot. To Catch a Train has some wild setting elements related to both the steampunk side of the setting and the chaos of the wastes. Black Scorpion introduces a major recurring character in the setting, and does a good job of letting you know why she is important in the adventure itself, in a manner that can be presented to the Writers in the game.

There is a character that is suggested as being allowed to escape at the end of one of the adventures, which might feel contrived in a less narrative system, but in a game that is already talking about manipulating the meta-structure of the narrative and introduces Rewrites, I don’t think it feels out of place.

The appendix includes pre-generated characters to use for the adventures, blank sheets to use for creating Director characters, summary charts all collected in one place, and a random table for determining Qi powers.

If you are already prepared to jump into a narrative game . . . there is a lot of potential for cinematic action in a wild and imaginative setting, in a book that looks great and is structured to be very friendly to the Director running the adventures.
Share22 [1]
Tweet14 [2]
Reddit1 [3]
Email [4]

The book’s appearance is striking, and that’s relevant beyond just the aesthetic value. That striking appearance helps to call out items in the adventures, sidebars, and special rules. The setting is evocative and has lots of room for play, and gives just enough detail to be useful. The rules provide a structure that allows for narrative descriptions that can be as cinematic as the players are able to provide, but still have some built-in mechanics to remind the players when to move the spotlight. The adventure structure is very useful at a table, and even divorced from the specific rules would be a nice template to follow to keep track of triggers and the flow of information about the plot.

The stated purpose of this product is to serve both as an introduction and potentially as a quick reference for players at the table. While I think it serves as a good introduction, I’m not sure that it will be the best reference book. It took a little bit of effort to assemble the rules in my head when reading, and there is text mentioning a limit to perks and how to refresh the ability to use them, but it’s only found on the pre-generated characters or in one line on a table.

High Plains Samurai Legends does seem as if it would be a good introduction to the setting and style of the finished product. It looks great, the formatting is on point, and the adventures appear to be very table friendly.

That said, if you aren’t already someone that enjoys more narrative games, I’m not sure if this is going to be the game to convert you. With the ability to use Rewrites and potentially introducing supporting characters that don’t belong to the Director, and certain rules that protect elements introduced by the Writers, it may feel too many steps removed from a more traditional game.

On the other hand, if you are already prepared to jump into a narrative game, and you don’t mind thinking through all the rules interactions, there is a lot of potential for cinematic action in a wild and imaginative setting, in a book that looks great and is structured to be very friendly to the Director running the adventures.

Do you have a favorite game that mashes up genres? How do you feel about framing RPGs in terminology from other media? Any games you think I should check out in the future? Please let me know. I’ll look forward to hearing from you!

Thanks for this review, Jared. Very thorough and I hope this gives everyone what need to make that fateful decision when it becomes available on March 20, 2018. For free. Say whaaaaaaaat….?