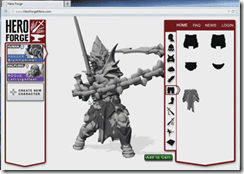 A few days ago, I came across a kickstarter for a thing I’ve known was coming in the next few years and dreamed of doing if I ever won the lottery — combining 3d printed miniatures with the character creators from various mmorpgs. Imagine being able to use sliders and create a custom 3d model, then print it out as a 3d miniature. Technology has been getting there, and Hero Forge is actually making it happen. On Sunday, I did a video interview with Joshua Bennet and Teagan Morrison, the co-founders of Hero Forge. The interview is below and it has some really great moments — like when they pull out the miniature with moving parts.

I want to ask all the readers the same question I asked Joshua and Teagan for the final question of the interview. What is the character that you played that you could never find the right miniature for, but could if you could make a custom one?

Update: It was talked about briefly in the interview, but now they’ve released more information about it. Hero Forge is going to keep the UI capable of exporting images so you can make character portraits and make use of those next to your minis.