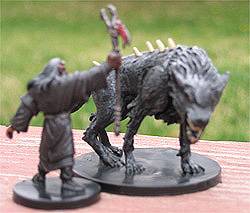 In longer-running campaigns, one of the things I enjoy most as a player is feeling a connection to my character. It usually doesn’t happen right away, and it doesn’t tend to happen much at all without some initial outlay on my part (good background hooks, fun concept).

In my group’s D&D game this past weekend, I crossed the line from “I’m having fun playing this character,” to “I really like this guy, and I’ll remember him for years after the game.” That might sound odd, but it’s the best way I can think of to express the connection I’m getting at here — it adds another very enjoyable layer to the game.

The interesting thing in this case was that this happened when it did because of choices our GM made, and that got me to thinking about ways that GMs can foster a lasting connection between players and their PCs.

The biggest one by far is featuring PC backgrounds in play. When your players create good character backgrounds (or develop them during play), those are flags [1] pointing you towards what they want to see come up in the campaign.

This is what did the trick for me with my druid last Saturday: Our GM, Sam, created the whole adventure around Ashir’s background, which hadn’t really come up before that. It rocked — and it always does. (That’s Ashir and his dire wolf, Arzen, up top in the “Martin’s not so great with the macro function” photo.)

Running a close second is making sure each PC gets ample chances to shine. Moments where all eyes are on one PC are opportunities for that PC’s player to pull out all the stops, ham it up and do something really cool. Spotlight [2] scenes are crucial to helping your players connect to their characters.

Along the same lines, you need to ensure that the PCs get to use their abilities. Character abilities are a lot like flags: they represent the stuff that your players think will be fun to do in the game, as well as being some of the most prominent and iconic aspects of their characters. Look at skills and abilities as opportunities.

Have the NPCs play to the PCs’ concepts, including strengths and weaknesses. This is an offshoot of making use of background flags, but it stands pretty well on its own. If one of your players builds a character who’s all about being big and tough, have NPCs comment on their stature, seem slightly intimidated in their presence and (once the PCs are well known) recognize them from stories they’ve heard about their martial prowess. In other words, reinforce what your players think is cool about their characters.

There are lots of other ways to encourage a connection between players and characters, but these are four of the most potent, most broadly applicable and easiest to implement.

As a GM, what other techniques do you use to help your players connect to their characters? As a player, what has your GM done that’s made you feel this connection?

Comments Disabled To "Helping Your Players Connect with Their Characters"

These are all really good points and things I need to work on as a DM.

The archetypes thing makes me think of the old d6 Star Wars RPG (WEG), which named it’s “classes” (or whatever they called them) that way: Laconic Scout, Brash Pilot, etc. I always liked that approach.

Just as you did, I’d say three terms makes for a perfect archetpye: short enough to not just be a description, long enough to be useful.

I like to take a moment during character creation (which I always have my players do in front of me, no pre-gens) to ask the player how they see this PC interacting with the game. Is he or she a powerhouse? Maybe an intellectual? I ask why they took certain skills or other traits too.

Those brief conversations help me to plan cool spotlight moments early into the game for their PCs. And on more than one occasion I’ve dropped some plans when I realized that none of the PCs would be a good fit for the situation.

I’d go so far as to say that what makes a character memorable isn’t the “crunch”, it’s the “fluff”. Obviously, don’t ignore the crunch, but focusing on the fluff makes the character come alive.

Otherwise, he’s just some stats on a page.

Your four elements are excellent tools in encouraging connections with their PCs.

More general than your point 4, offering NPC interaction in general can provide a lo of opportunity for character development.