Have A Quick Story Framework

I am in the car on my way home from Thanksgiving at my parent’s house. It is the second leg of the trip, and I am now a passenger. We are due home in about two hours, just in time for me to run Scum & Villainy for my Sunday evening group. That was when the text came in.

I am not feeling well. I need to waive off tonight.

I texted the other players in my group, and everyone wanted to play something; a backup game. That was fine. I had just finished reading Beach Patrol, and I was down for some Baywatch action. The only thing is, I had no session prepped. The book had an adventure idea generator, but it comes up with a premise, which is good, but I also needed a bit more structure in terms of scenes, beats, etc.

So I opened my phone, clicked on OneNote and started writing some quick session notes, using a pretty standard story framework that is my go to when I am improvising games.

What is a Story Framework?

A story framework is a narrative structure, a formula of sorts, that tells a story. Which means that it has a start, a middle, and an ending, as well as some number of scenes. It is not an actual story but rather a framework that you can adapt to create a story, or in this case a gaming session. 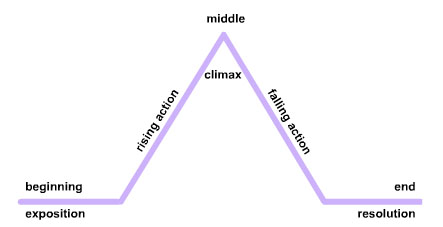 There are numerous frameworks for stories but the one that most people who were educated in the US know is Freytag’s Pyramid.

If you want to really jump into the rabbit hole when it comes to plot structures, check out Plotto by William Cook.

So what is the deal with story frameworks? It has to do with prepping sessions. When we prep a session, we use some kind of framework to lay out our encounters and how the plot of the session will unfold.

So if you are doing traditional prep, this often takes the form of an outline. We sit down and outline how we think the session will go, and then write our notes. Often when we are doing this, we are using some kind of framework either intentionally or unintentionally.  These frameworks make prepping your game faster because they are known structures that you can employ.

The framework that I have committed to memory, and the one that I use the most when I am improvising sessions, is this:

In this structure, there are multiple goals that the players must achieve in order to be able to confront the cause of the problem in the showdown (climax).

It’s a game of Rockerboys and Vending Machines and the characters are trying to extract a Singer from a nightclub. So my outline would be:

That right there is all I need for a few hours of play. Now when it comes to running the game, we may deviate wildly from this initial outline, but at least I had a starting point for the game.

Elaborating on the Framework

So I am in the car with two hours until I get home, so I have some time to work up a slightly more complex story for Beach Patrol. So, I take the basic framework but I decide to have two plots going on during the session.

A-Plot: A calendar photo shoot is taking place on the beach and creating issues.

B-Plot: A new version of Ecstasy has hit the beach and is causing a lot of teens to get into trouble.

Then I adapt my standard framework a bit to look like this:

In this case, I am weaving the A and B plot in alternating scenes, and then in scene 5 I look to close up the B Plot, but I bring back some elements of it in the Showdown.

For the Goals, I pulled from the list of possible encounters, based on what felt right at the time. But I decided that the showdown would be a boat rescue situation where the drug dealers crash their boat into the model’s photo shoot out in the ocean, and there are all sorts of people who need to be rescued.

Thirty minutes after I received that text, I had brainstormed and created a genre-fitting adventure for a game that I was running for the first time. We played that night and had a blast. The models were rescued and the drug dealers captured. The Beach is safe once again.

Having a go-to story framework, one that you are comfortable with, is a great tool for any GM, but especially for improv GMs. It helps with coming up with a game with little or no time to prep, and when you have more time, you can elaborate and subvert the structure to make more varied plots.

Do you have a go-to story framework that you use in your games? Are you now thinking of making one? What are some of your favorite frameworks?

2 Responses to Have A Quick Story Framework