Halloween Gaming: Betrayal at House on the Hill

On Halloween, nothing could be spookier than spending the night in a haunted house with your friends, exploring the corridors, looking for hidden passages, and perhaps trying to solve the mystery of all the previous people that disappeared in its halls over the years.

Of course, if you’re a geek—and by reading blog entry, you are already proving that you are at least 5% geek—you know that spending the night in a haunted house is less likely to result in a Scooby-Doo scenario than it will a Cabin in the Woods fustercluck. So what do you do if you have the (potentially suicidal) urge to ride up to some nefarious manor house and try your chances against the supernatural forces that may reside inside? 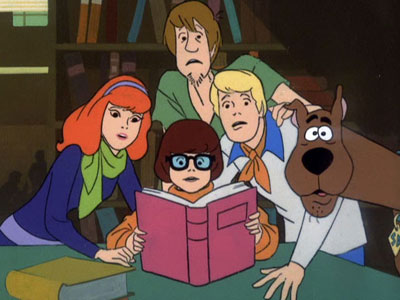 Hint: The answer is not “Send these guys in first.”

You play Betrayal at House on the Hill. 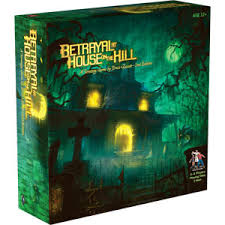 I first played this game years ago, and it wasn’t until about last year that I rediscovered it and how much fun it was. You play one of six explorers who are wandering around a haunted house. Each explorer has two potential sets of stats: usually one is a more physical set, and the other more mentally-focused. 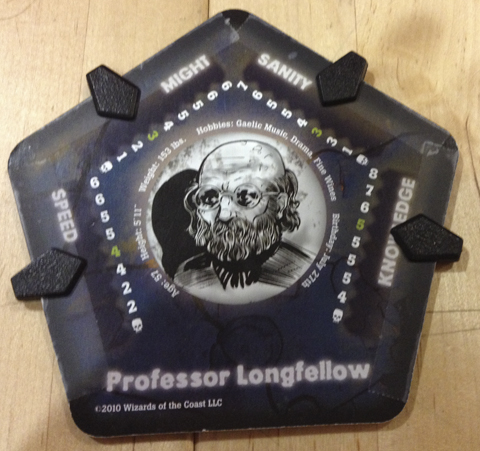 Note the tape on the sides: that’s to make the sliders less likely to slip. When you gain skills or take damage, you move the sliders up and down to reflect that. Of course, in the age of the smartphone, you don’t need to use the cardboard trackers. There’s an app for that.

In one of many aspects that make this game great to play over and over again—the house isn’t physically “there” until you explore it. Go through a door that doesn’t have a room already attached to it (which, in the beginning, is EVERY door) and you get to pick a room out of the room pile and place it.

As you can see, the cards themselves tell you where the rooms can be placed. If you are exploring the basement, for instance, you need a card that has the “basement” area highlights on it in order to place it as a new room: 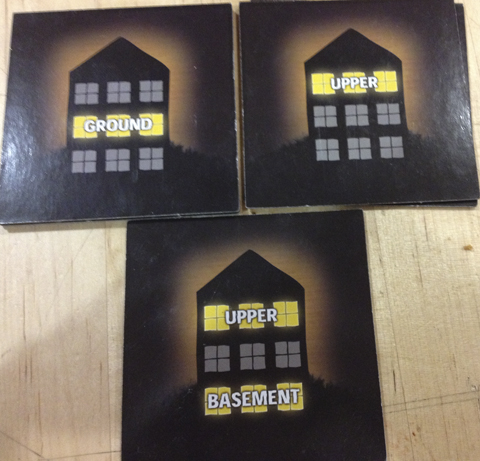 More often than not, rooms will have a little symbol in them. If you explore a new room and it has a symbol in it, your turn will end there, but you get to draw the appropriate card. The “swirl” indicates an event: blood dripping from the walls; a couple of skeletons in the corner of the room in an embrace; a scream is heard in the distance. Usually events result in your character gaining or losing stats (depending on how they roll against the event). A “cow skull” indicates your explorer has discovered an item—and those can be VERY handy later on. A “crow” symbol can be ominous indeed: it indicates that you have found an omen, and any omen can trigger the icing on the spooky-house-exploring-game cake—the HAUNT! 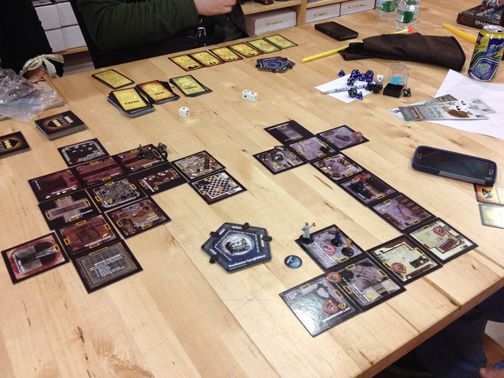 Here’s a partially assembled haunted house (with some ground floor and basement rooms).

If you draw an omen card, it can work similarly to an item or an event. However, after drawing the omen card, you must roll a pool of six dice. The dice all have three blank sides, two one-pip sides, and one two-pip side. If you a number under the number of omen cards under the table, then the haunt begins!

There are tons of haunts, some which change one of your friends into a traitor, others where you are all working together against a looming evil that threatens to exterminate you. I’ve played games where aliens attacked, where a giant spider tried to eat us, and where we’ve had to slay dragons. The haunts are where the real meat of the game lies—it’s when the haunt start that you get your “win” conditions. And since the house can be completely different each time you play the same haunt it’s a new experience every time. 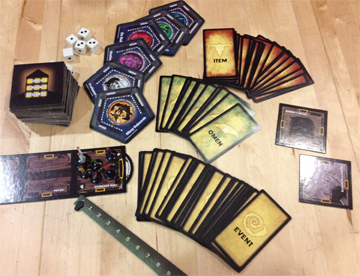 So, instead of checking out the run-down mansion that’s rumored to be haunted, play it safe—play Betrayal at House on the Hill instead. 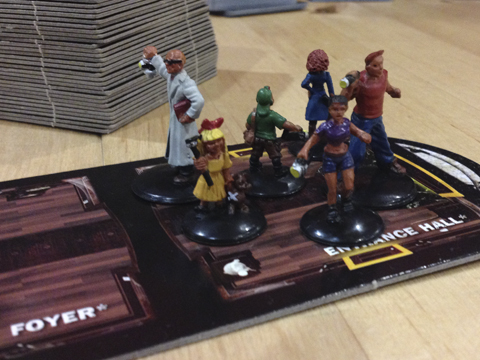 We like you, readers. Let these guys do the exploring.