Growing Your Home Base 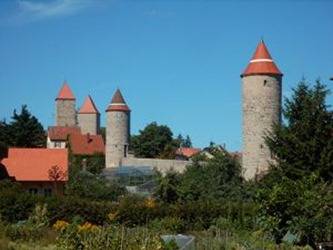 Many campaigns feature a small fort outpost or resource gathering town surrounded by largely unexplored wilderness. These small home bases make sense. Few people are willing to relocate into an unknown and likely dangerous area for dubious profits. Only as these outposts prove their value will settlers migrate to them. However, these particular settlements have a wildcard that encourages their growth: player characters and other adventuring types. These wild cards work actively to make the settlements a safer place, and bring much desired sources of economic prosperity. These increases in security and prosperity have a direct effect in the growth of the settlement. Thus it’s natural for these home bases to grow as a result of the PCs successful exploits. Though the below numbers and estimates are for a fantasy campaign (and rounded off from the amazing Medieval Demographics Made Easy by S. John Ross) the concepts work just as well for any setting with a dangerous untamed wilderness, like many science fiction settings.

Origin
The first thing to consider is the origin of a settlement which informs it’s size, demographic composition and economic structure. Different reasons for the founding of an outpost create a different proportion of professions and available services.

Military Base
Many frontier outposts start as military bases, there to stake a claim, hold the peace or provide warning of – or a buffer against – hostile forces. Military bases obviously have above average defenses, usually in the form of a wall and a contingent of professional or semi-professional warriors. In addition, they usually have a blacksmith and other craftsmen who can perform at least repair work on weapons and gear, and a reasonably trained medic (both of which usually require a surprisingly large body of people to support), a mead house or feast hall to keep up morale, a general store, and a small house of worship. Furthermore, military bases are almost certainly a response to a threatening presence in an area, ensuring a ready supply of work for adventuring types.

Work Base
A frontier town could be a mining camp, lumber mill, or any other sort of settlement that exists to harvest a particular resource. Work bases always have a general store that stocks plenty of mundane equipment relevant to their income source, an entertainment venue of some sort to help the workers relax, a house of worship for their spiritual needs, and maybe even a blacksmith that is capable of repairing tools (but probably not able to make or repair weapons). Work bases also enjoy frequent trade that tags along with shipments of product out, and tools and supplies in. However, work bases can be dangerous places. Without as much focus on defense as a military base, work bases can be vulnerable to attack. They also collect and house valuable material, usually create obvious signs of work, and rely on shipping to move large volumes of valuable goods. This does, however provide lots of challenges for those with the mettle to face them.

Expansion
Often, new areas are settled simply for the benefit of possessing more useable land, and governments will often cheaply sell or even give unused land to whoever will work it. These communities are mostly populated by farmers, but other professions may be found where the land supports it. Few specialized services are available. Even though a tavern or general store may exist, it’s often miles away, making it easier for neighbors to simply trade with one another. Assuming good land, a square mile (a little over a half mile radius) can be worked by ~100 people and provide food for ~200. Worse land can be worked by the same number of people, but produces less food. Thus, population density may drop as the population spreads out to work the choicest bits of land. These settlements are often the most poorly defended due to their sprawling nature, but they have little to tempt bandits or other hostiles aside from the occasional granary raid. While the lack of resources worth stealing would imply these settlements are quiet, the size of them means a lot of area to keep an eye on for would-be defenders.

Support Base
The next thing to consider is how the people of the settlement feed and supply themselves. Different support bases can make a large difference in the population and economic activity of an outpost.

Self-Supporting
Some bases are self-sustaining communities. Expansion settlements are almost always self-supporting, even if they get occasional help from outside sources. Self-supporting towns must contain their work force (military units or workers) plus the infrastructure necessary to support both the work force and the support itself. Agricultural support for ~200 people requires a square mile of good farmland (a bit more than a half mile radius), which itself must be tended by ~100 people, so even the smallest self-supporting bases need that much good farmland or a commensurately larger amount of poor farmland. Note that in poor farmlands, farmers must spread out to find choice land, making self-sustaining bases huge or untenable. However, if the land can support it, these bases need little outside support and have a ready supply of food, though it’s not always inexpensive or diverse.

Sponsored
Alternately, a base can be supported by regular supply trains from the government that sponsors them. These bases can be much smaller than self-supporting ones requiring only enough land to erect a few buildings. These bases have the advantage of constant commerce. A desired good is always a bit of gold and a few months wait away. This is a double edged sword however, because without this regular support the base has no hope of survival. In addition to dependence on outside forces, extra work is required to keep supply lines open.

Population
With Origin and Support determined, population can be chosen. Since we want to grow our home base, we should select a fairly low population. In general, increments of ~500 are “magic numbers” up to about 2500, after which there are few milestones. Sponsored Military bases that aren’t expected to do much more than keep an eye on the surrounding countryside and send reports can be as small as a few dozen people. Sponsored work camps can have populations from a few hundred to 1000. Making these types of bases self-supporting at least doubles their population. Expansion settlements can be of nearly any size.

The effects of PC activities on home base growth has to be determined on a per-game per system basis. As a GM, you may feel comfortable simply winging it, or you may want to design a system that takes various factors into account. Factors you may want to consider are: experience or levels gained, significant threats removed, gold spent at base, gold spent importing goods, or attentiveness to the needs of the settlement itself. However you handle it, don’t make it too complicated. It’s tempting to want to write down a long formula and update it constantly, but too much complexity adds bookkeeping that probably isn’t worth it.

However you decide to handle it, as the PCs act, the town grows. You can make this obvious to your players by adding new faces to town “At the bar is a young man you’ve never seen before.”, by describing public buildings or streets as crowded, by describing new construction projects adding buildings and the like.

The Effects of Growth
One of the most impressive effects of the population growth of your home base is the introduction of new types of craftsmen and professionals. Butchers, for example, require a population of 1200 or more. Before that threshold is reached people have to butcher their own animals. There simply isn’t enough demand for a butcher to support themselves. For a list of population thresholds, scroll down to the Merchants and Services section in the aforementioned Medieval Demographics Made Easy by S. John Ross. Mr. Ross also notes in his article, that if a settlement is short of a population threshold, you can convert it’s current population to a percentage of the requirement, and roll for the presence of a type of professional. For example, our town of 600 people has a 50% chance to have a butcher. But since this butcher is trying to live off of 50% of his normal income he may cut corners, he may not be particularly skilled, or he may have another job on the side limiting his available hours. In these cases, you may wish to modify the percent chance of a professional being found, taking into consideration how many times the PCs have imported an appropriate good. If adventurers make it a habit of sponsoring feasts after major victories, complete with imported elven wine, chances are much better than normal that a wine seller will set up shop in our tiny village.

Just like population growth, the effect of this is mainly fluff. One week a player will be ordering new gear from the traveling peddler (with an attendant waiting period), the next he’ll be strolling into his local blacksmith’s shop. But the number of goods and services on the list of professionals a player character is likely to use is fairly small, so that transition won’t happen very often. Instead, when the village hits 700 people and a chandler, mercer and cooper move in, the next trip to the tavern might include a bit of fluff about the new ale kegs the barkeep has had installed, several of the well to do ladies in town will likely be wearing new dresses of imported cloth, and an ambitious young man carrying a basket of honeycombs might bump into the characters on his way to the chandlers new shop.

These new people in town can be a source of hooks and adventures all their own, too. Maybe that chandler has heard there’s a giant bee hive near town, and is willing to pay for enough wax to make a set of candles. Maybe the townsfolk don’t trust the shifty new magic shop owner and hire the PCs to see where he goes when he sets off alone into the nearby forest.

Mainly though, the purpose of this kind of setup is to give the settlement a “living” feel as it grows and changes, and to give your players an additional form of advancement that they can work towards and derive a sense of accomplishment from.

11 Responses to Growing Your Home Base