Go Ahead and Get it Wrong the First Time 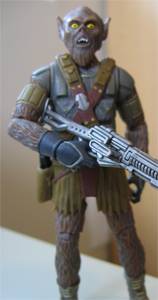 I just started reading The Making of Star Wars (which, if you geek out for behind the scenes stuff, is fabulous), and was struck by how wrong most of the original concept art for the main cast actually was.

Take this guy on the right, for example. That’s Chewbacca.

Specifically, it’s a 30th anniversary figure based on Ralph McQuarrie’s concept art for Chewie from 1975. At that time, Luke was a girl and Han was a Jedi who looked suspiciously like George Lucas.

And Chewie, here? He looks awful. Not because Ralph’s not a gifted artist (which he is), or because it’s not a cool design for an alien creature (which it is, although it makes for a kind of goofy-looking action figure), but because it’s almost entirely wrong for Chewbacca. Can you imagine if Chewie looked like this in the films?

Which is where the GMing angle comes in. This struck me as a great reminder that, just as in writing, your first draft of anything for your game — campaign setting, region, encounter, NPC or lovable bowcaster-toting sidekick — doesn’t need to be perfect right out of the gate.

If you dislike something you’ve created, don’t stress about it. Move on to something else, or just take a break, and come back to it a little bit later.

You don’t need to endlessly rework every little thing you design, but it’s good to consider re-examining the major elements (and as many of the minor ones as you have time for) at least once before putting them into play — just in case you start out with ol’ bug-eyes here.