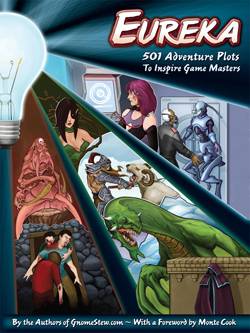 Featuring a foreword by gaming industry legend Monte Cook, Eureka contains 501 complete adventure plots usable with almost any roleplaying game, plus GMing advice and tools for making the most of every plot.

Each plot includes a hook to draw your players in, an outline detailing enough material for a complete adventure, generally in the form of 3-5 meaty encounters, and any game mastering notes, plot twists, and advice you might need to turn that plot into a fun night of gaming.

Eureka is available for preorder as a print + PDF bundle for $34.95. It’s 312 pages and features original artwork throughout. When you preorder, you’ll get immediate access to the PDF, a $16.95 value, weeks before the book ships. $34.95 is the retail price of the print edition — we don’t believe you should have to pay for content twice, so the PDF is included at no additional cost.

The preorder period runs from today through July 22, 2010. Books will ship in late July or early August, and folks in the continental U.S. should receive their books before GenCon.

Find Out More About Eureka

We believe in “try before you buy,” so we’ve made it as easy as possible for you to get the skinny on Eureka:

See What Others are Saying About Eureka

We sent out advance copies of the retail PDF version of Eureka to some of the best gaming sites on the web, and asked if they’d be up for writing about it. Kobold Quarterly has the first review:

You can also check out articles about Eureka from Campaign Mastery, Critical Hits, Newbie DM, and UncleBear had to say about Eureka:

Many thanks to Wolfgang, Chatty, Johnn, Newbie DM, and Berin for writing about Eureka!

More articles about, and reviews of, Eureka will be appearing in the not-too-distant future from the folks who received advance copies but didn’t go to press in time for this article. Stay tuned!

To celebrate the culmination of a year’s work and the launch of Eureka, we’re having a contest. You don’t need to buy the book to participate, you just need to be a Gnome Stew member. (Not a member? Sign up for free.)

The Prize: We worked with Dicecreator, an artisan who creates beautiful, handcrafted dice, to create a prize for this contest. Here’s what he came up with: 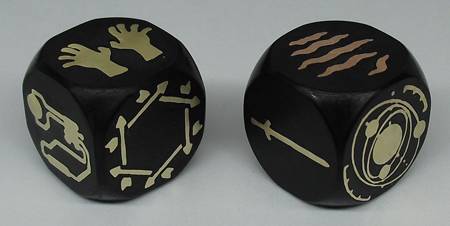 Because Eureka is a multi-genre book, fully supporting fantasy, sci-fi, and horror, we wanted to do multi-genre dice — there are two fantasy faces, two sci-fi faces, and two horror faces. The dice themselves are standard-sized d6s, but the faces are anything but standard: Each face’s design is made of inlaid metal, set flush with the surface of the die. (See close-ups: one, two.)

The number of key elements on each face is the value of that face: one sword (1), two zombie hands (2), three circuit elements (3), four celestial bodies in the star chart (4), five claw marks (5), and six arrows (6). The 5-face is inlaid with copper, and the others are inlaid with brass.

So how can you win them? Start here:

How to enter: To enter to win this pair of custom-made dice, all you need to do is guess the total I rolled in that video and put your guess in a comment on this article. If no one gets it exactly right, the winner will be the entrant who came the closest without going over. If multiple people guess correctly/closest, the first instance of that guess wins. You’ll need to be a Gnome Stew member to comment, but there’s no purchase necessary.

A couple tidbits that may help you: I counted percentile d10s (with 10, 20, etc.) as regular d10s (so 20 = 2, etc.), and while I’ll report the results of weird dice — emoticons, compass directions, and a host of other oddballs — they’re not part of the contest; some dice fell on the floor; and for the second layer of dice, I took my best guess at what the results would have been. There are also three photos available that may be of interest: counting the dice before the roll, the table post-roll, and totalling up the roll.

One entry per person (though you can comment multiple times — only your first comment with a guess counts), and gnomes and the folks who helped me count the dice — thank you, Daniel, Sam, and Jaben! — aren’t eligible.

The contest ends on the same date as preorders for Eureka: July 22, 2010 at 10:00 pm Mountain time. The winner will be notified by email and announced here shortly thereafter. (Make sure your Gnome Stew account email address is valid.)

Good luck to everyone who enters, and a big thank you to Dicecreator for crafting these dice!

Why We Think Eureka Rocks

Eureka was written, designed, and funded by the gnomes, and we wrote it for two reasons: one, because we think it’s an awesome idea and it’s a book we’ll all be using ourselves for years to come, and two, because we think you’ll love it.

Conventional RPG industry wisdom is that system-neutral books — like Eureka, and, in blog form, like Gnome Stew itself — don’t sell. We respectfully but emphatically disagree. We see a need for a book like this, and it’s one that we wish already existed. It didn’t, so we wrote it.

I sent the gnomes an email on June 26, 2009 asking if they’d like to jump off a cliff with me write a book together, and they all said yes. We used revenue from Gnome Stew to fund the book, along with a small loan from a generous benefactor, and spent the next year designing, writing, editing, and developing Eureka.

We tried to do everything right, which is part of why it took so long: We paid freelancers promptly, credited artists inline with their artwork, did two rounds of editing and two rounds of proofreading, created four indexes — little things, maybe, but important. I think the PDF excerpt speaks for itself, and I’m incredibly proud of what this team accomplished.

For me personally, this day represents the culmination of something I first dreamed about doing almost as soon as I started gaming back in 1987. It’s been one hell of a ride.

My thanks to everyone on the Eureka team — all 18 of my co-contributors, as well as foreword author Monte Cook — for making this a reality, and my thanks to everyone who reads Gnome Stew. If you didn’t read this blog and click on our ads, this book literally wouldn’t exist.

Oh, and one more thing:

Thanks for reading, and I hope you like the book!