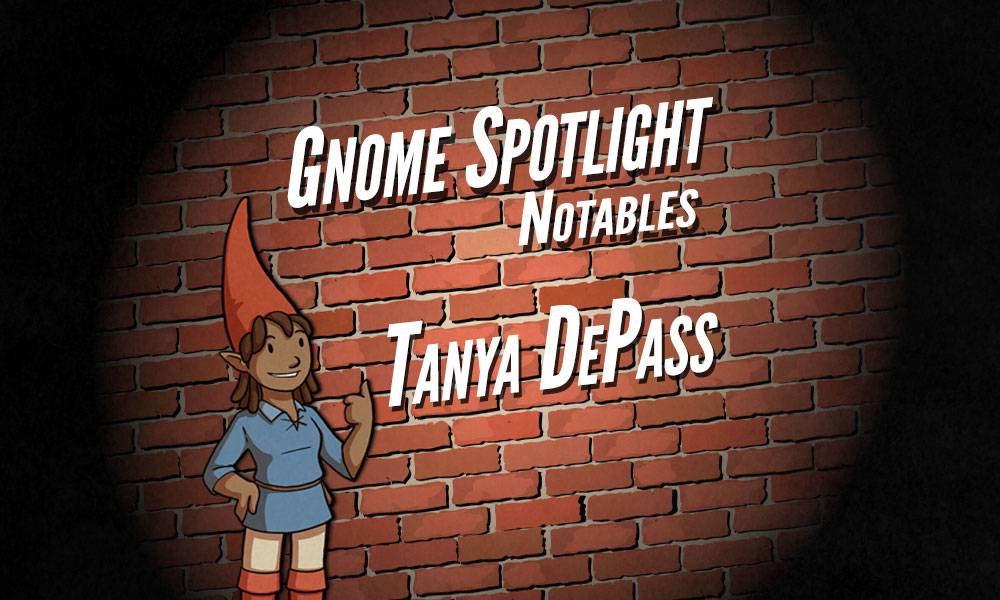 Welcome to the first installment of our Gnome Spotlight: Notables series. The notables series is a look at game developers in the gaming industry doing good work. The series will focus on female game creators and game creators of color primarily, and each entry will be a short bio and interview. We’ve currently got a group of authors and guest authors interviewing game creators and hope to bring you many more entries in the series as it continues on. If you’ve got a suggestion for someone we should be doing a notables article on, send us a note at headgnome@gnomestew.com. – Head Gnome John 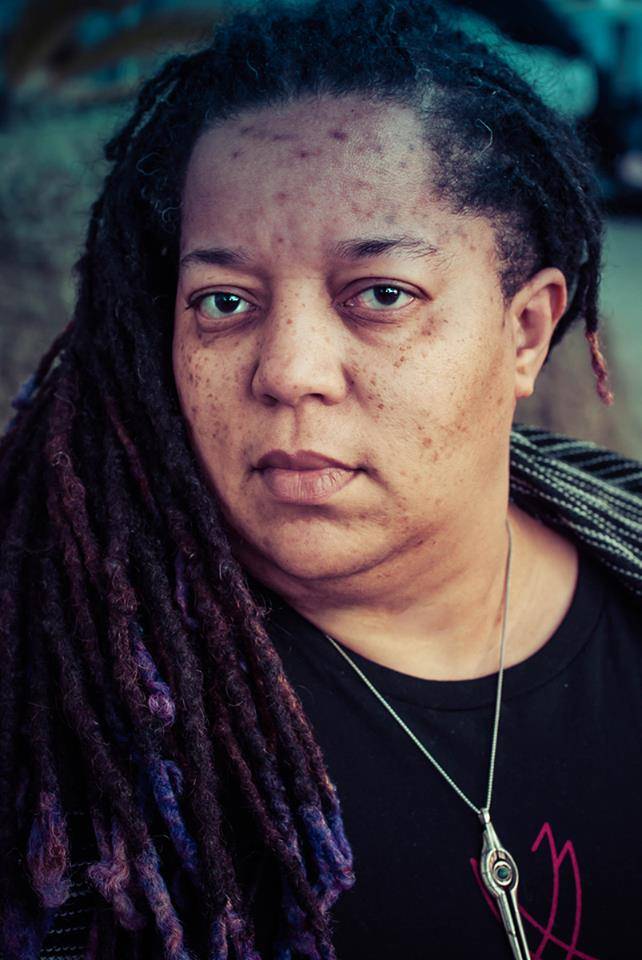 Tanya DePass is the founder and Director of I Need Diverse Games, a non-profit organization based in Chicago, which is dedicated to better diversification of all aspects of gaming. I Need Diverse Games serves the community by supporting marginalized developers attend the Game Developer Conference by participating in the GDC Scholarship program, helps assist attendance at other industry events, and is seeking partnership with organizations and initiatives.

Tanya is a lifelong Chicagoan who loves everything about gaming, #INeedDiverseGames spawn point, and wants to make it better and more inclusive for everyone. She founded and was the EIC of Fresh Out of Tokens podcast where games culture was discussed and viewed through a lense of feminism, intersectionality and diversity. Now she’s a co-host on Spawn on Me Podcast. Along with all of that, she’s the Programming Coordinator for OrcaCon, the Diversity Liaison for GaymerX and often speaks on issues of diversity, feminism, race, intersectionality & other topics at multiple conventions throughout the year. Her writing about games and games critique appears in Uncanny Magazine, Polygon, Wiscon Chronicles, Vice Gaming, Paste Games, Mic, and other publications.

1.)    Tell me a little about yourself, your work, and about I Need Diverse Games. What mediums do you work in? What’s one project or credit that you’re particularly proud of?

I’m a born and raised Chicagoan, grew up on the South Side of the city, lifelong White Sox fan, and now I live on the North Side, near the Swedish part of town. As for I Need Diverse Games, it started out of frustration with the “it’s too-hard-to-animate women” that had been making the rounds in mid-2014. I tweeted out the hashtag on a few tweets before work in early October ‘14 and by the time I got to work it was trending a bit. After it stayed in the public sphere, I was getting tapped to talk about it on podcasts and for some articles. I was interviewed by Arthur Chu for Salon in December and from there things just kept growing.

I work in both videogames and tabletop, with a lot of work in tabletop in the later part of 2017 joining the staff of OrcaCon as their programming coordinator; after being a Guest of Honor in January 2017. I was also a Industry Insider at GenCon in the last year, and I’m already looking into panels for 2018.  Most people do refer to me for video games but tabletop needs way more help in terms of diversity.

As for what I’m most proud of, I’d say joining the Game Developers Conference Scholarship program. We get a chance to send 25 folks to GDC that may not otherwise have access to a week of professional development. It’s part of our mission and work to get more people into the industry, as well as help them stay.

2.)    What genres and themes do you lean toward? Have your tastes in writing and development changed over the years, or are there things you are consistently drawn back to?

I am a big RPG nerd, and have always been more into games like Dragon Age, The Witcher, and Dungeons & Dragons. I lean HARD into those because I have always been drawn to a narrative-driven game versus strictly action.

My tastes have shifted to be more open to games like FPS, and games that are narrative-driven but have more action in them. I’ve fallen in love with Tom Clancy’s The Division, especially after the latest update. My first love will always be RPGs though, both western and Japanese titles. I’ll always go to bat for Final Fantasy VII and Dragon Age II. Those are comfort games for me, that I can pop in and enjoy no matter what.

I got into games as someone who snuck and played D&D because my mother thought it was Satanic, and by spending a lot of time in arcades when I had the quarters to spare. Thankfully not a lot of people have made me disappointed and not look up to them, but as for current folks who inspire me, the list is long; too long to fully go into here but here are some folks. Ann Lemay, Ceri Young, Andrien Gbinigie, Manveer Heir, Rebecca Cohen-Palacios, Donna Prior, Charles Babb, Karen Lewis, Gordon Bellamy, Richard LeMarchand to name a few.

4.)    You started INDG to create dialogue and action addressing the default of whiteness in games heroes and themes. What has that experience been like? Where are you hoping to go in the next few years with the project?

It’s all been a happy accident that worked out well! The experience has been both great and terrible, with a lot of awesome opportunities including writing for games, doing an anthology that will be out this year. I was able to do a podcast, Fresh Out of Tokens for two years and join Spawn on Me earlier in 2017 due to the work I’ve been doing and the perspectives I’ve shared and learned doing this work.  In the coming years, I’d love to have a physical location for I Need Diverse Games, and be bringing in enough to fund others’ work, or trips to conferences. I’d love to have others step up and do some of the things I’ve been doing like going to conventions, conferences, running and being on panels about these topics.

5.)    You’re a pretty powerful voice in the industry. Do you have any advice for women of color, particularly young women of color, on how to deal with an industry awash with racism and sexism without losing their creativity and self-worth?

Find your circle, find other Women of Color in gaming. Join groups like the Blacks in Gaming SIG from the IGDA (International Game Developers Association). Network with others on twitter, and in game dev groups. Sign up on blackgamedevs.com and find others.

Remember you are not alone in the industry. Know that the micro-aggressions you experience  are real, they aren’t over-exaggerated. Also self care is utmost. Know when to take a break, disengage and when to dig in. You don’t have to fight every battle, and don’t let people drag you into everything they want to make into a fight that you need to engage in. Remember you engage on your terms, for your health and well-being. Its ok to be angry, it’s fuel at times. Don’t let others burn your wick down, especially when they won’t even thank you for it in the end.

6.)    Indie games are often on the frontlines of developing new, exciting things. What are some of the indie games that have come out recently that you feel are important not only as fun, but as contributions to a diverse genre?

7.)    You do diversity consultation, as well as other freelance work. What are some of the services you offer, and where can people go to find information on how to hire you?

I can review your script, character description, world building etc. I gave talks at Ubisoft Montreal and Arena Net on diversity in general as well as their games. If anyone is interested in my services, I have a handy contact form on my site! ( https://cypheroftyr.com/ )

I’ve got an anthology coming out this year, Game Devs and Others: Tales from the Margins published by CRC Press. It’s a follow up to Women in Game Development: Breaking the Glass Level Cap, which was edited by Jennifer Brandes Hepler. Its personal essays from marginalized folks in the industry and also adjacent to it. I’m also getting in some writing for a couple unannounced projects which I am excited to share soon!

Thanks for joining us for this entry in the notables series.  You can find more in the series here: https://gnomestew.com/notables/  and please feel free to drop us any suggestions for people we should interview at headgnome@gnomestew.com. 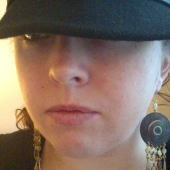