About Jabari in their own words: Jabari Weathers is an illustrator and game designer who currently resides in Baltimore, Maryland. They also are (apparently) under suspicion of being a goblin princet from beyond the veil. In order to keep up their glamor, they make art and narrative games for themselves.

You can help them maintain their human facade by checking out their artwork at jmwillustration.com [1] and their game design work at lunarveil.press. If you wish to follow along with their more anecdotal adventures, they can be found on instagram (jmwillustration) and twitter (JabariWeathers).

Tell us a little bit about yourself and your work? What project are you most proud of?

Hi Tracy, thanks for inviting me to do this with you! I’m a black, nonbinary scifi fantasy illustrator by day, and tabletop rpg/narrative game 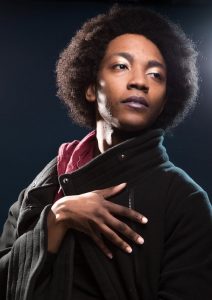 [2]designer by night. I live in Baltimore and attended art school here (at MICA). Soon after I found myself making so many tarot cards for roleplaying game publishers. The work I’m most proud of in that regard is, in fact, split between making the 7th Sea Sortè deck art, and the Bluebeard’s Bride Tarot of Servants art. Both projects put together took 8 months for me to make the art for, which kind of scares me. As far as my game design work, I’m working on an epistolary game called A Dire Situation, which is essentially a really perverse game of telephone inspired by Dangerous Liaisons and other acidic period piece dramas. It’s a good time. You can follow my artwork at jmwillustration.com, my (announced) game design work at lunarveil.press, and me at twitter.com/JabariWeathers and instagram.com/jmwillustration~

Existential tension, often the questions of identity and knowing who you are. I’m in a few different professional and creative circles that I simultaneously feel indebted to as far as my taste in media and interests, and feel not immediately welcome in, having to have carved a niche for myself within scifi/fantasy illustration and game design. I often try to find ways to take the kind of performative tension I feel as a POC in both circles and fold that into game design terms. It’s sort of like journaling. There’s a mechanic in A Dire Situation where everyone chooses a secret for another person’s character, but you don’t know what secret has been chosen for you specifically, even though your *character* is understood to be aware of the secret and you as a player get to see all of the available secrets that are in play at the table. The result is nobody is quite who they themselves think they are, and you end up having to question a lot about the entity you’re stepping into for the evening. I like trying to get people to question their fictional personas, anyway!

Actually I got into games through my mom, who played DnD when she was younger and never stopped consuming speculative fiction. She kinda just passed the genre interest on to me. I also grew up with cousins who played a LOT of video games with me, and eventually made my way toward titles that valued a kind of emergent design that tabletop RPGs are especially well suited for (for example, Thief, Deus Ex [I grew up with Invisible War and Deadly Shadows and played the earlier games in late high school and early college], Morrowind). In high school, my religion teacher (I went to an all boys Catholic high school), was really my first longstanding GM with 3.5, but I had been reading the books for a solid amount of time before that point. I don’t know if I tried to emulate any one person in my game design upon starting, but I did try to chase the same kind of player choice that Looking Glass Studios baked into their digital work (which they pulled from tabletop games in a lot of ways), as well as their interdisciplinary approach to game design. Look at Thief: The Dark Project against it’s contemporaries and you can tell that it was made by people interested in things outside of the industry that it was making an impact on. I love how Looking glass trusts it’s players and doesn’t hold their hand, instead giving them tools to let the experience emerge. I also love how their games had such odd and idiosyncratic approaches that really challenged the player. I still chase both things in the social landscape that tabletop RPGs create, and I really hope I make something that’s half as inspiring as that Looking Glass ethos was for me!

More recently, I’ve been owing a lot of the recent game design lessons learned to Marissa Kelly, Sarah Richardson and Whitney Beltran from Bluebeard’s Bride, and John Harper’s work on Blades in the Dark. The former is such an amazing study in how to get horror and tension to emerge, and how to bake unusual ceremony into a game. A lot of people are intimidated by it when they are used to simulationist style games, and many admirers of Bluebeard’s Bride also label it as “simple” mechanically, but there is *so* much happening in the social and emotional landscape of that game, so much that gets mechanized so eloquently. Every piece of vocabulary that the players (including the Groundskeeper) use is calibrated perfectly to the theme and discussions Bluebeard’s is meant to provoke. Blades does a wondrous amount of things with a swashbuckling setup by letting players pick the details of their abilities and tools on the fly, but making *everything* a resource management game. When some of those resources aren’t just ‘coin’ or ‘inventory’ but are ‘stress’, it becomes evocative in a game that I wish a lot of other action/adventure RPGs would be. Both also have a remarkable relationship to violence that ends up more nuanced than what I think the common examples of games present show to those not entrenched in the game community. I’ve been studying these both *very* closely, and trying to digest the things they’ve brought to my game brain rather deeply.

Don’t be afraid to put yourself out there, and do so in person! I try to go to events because I meet people and make fast friends when in the flesh, and those are friendships I really cherish and feel enriched by. Also, don’t underestimate how much you as (not a designer) are valuable to game design! A lot of my best game design ideas come from me essentially abstracting the anxieties of my day to day life doing freelance and being worried about the world into game mechanics and procedures, or finding the particular joys of the media I consume and turning that into a game. A Dire Situation started as an attempt to capture the unique feeling of watching people read things they shouldn’t have access to, which I always enjoy seeing in films. Get weird with your ideas, someone will cherish it and you’ll get to know yourself better through that, and don’t be afraid to share yourself before you’re ‘polished enough’. This industry is so young, and I think a lot of people curtail the considerable wisdom they can bring to it because they aren’t established, but that’s the way that communities grow best, when people exert the best of themselves in the truest way they know.

That’s a huge question, and I’m afraid of my answer being too succinct to pin down a lot of the things that I think are valuable and important that are shifting in this medium and the community that fosters it. Right now, there’s a generation of designers and gamers that are pushing to be *way* more inclusive in this medium, which is amazing because it’s such an empathy builder. With that, we’re seeing a lot of games that are reflecting that wider spectrum of experiences and needs at a higher frequency, and seeing that it’s getting good and wide reception. Games like Bluebeard’s Bride, Star Crossed, Mutants in the Night, and BFF:Best Friends Forever are challenging questions of who’s stories are told, who’s perspectives are shared and what kind of exchange do we expect from such a social medium. As things move forward, I think that kind of willingness and encouragement to lean into new experiences without apologizing to established patterns of play and design is going to only help this community grow faster and stronger, even with the anticipated challenges. This medium is showing very explicitly that Joy isn’t just killing goblins, and Pain isn’t just the threat of being killed by goblins, and that kind of emotional honesty is pulling the industry into it’s teenage years.

This also comes with a greater call for accountability in our community as far as social safety. There’s a lot more discussion of missing stairs, safe tables, and supportive gatherings than I felt just a decade ago as a teenager. A lot of conduct has been pulled rather painfully into the light, a lot of social patterns are under intense scrutiny at our tables and in this industry, and I think that’s rightly so. Being in this world, much as I love it, can be so quietly, exhaustively bracing, and the people that make up this industry should feel able to assert what makes them feel safe and when they are threatened. People are actively doing this in games and in the community, and that’s amazing.

What’s your most meaningful gaming experience?

Generally, one that has enough trust to get uncomfortable. One where I can lean into the vulnerabilities of characters, and embolden fellow players to do the same. I look for kind of emotionally intense, bracing media, and I love feeling that way (or provoking that feeling) in a game. I want my assumptions shaken up a little bit, and, assuming it’s navigated compassionately and safely, I value going to dark places in games. It pulls a lot of the horror and strife of my actual world into perspective. I generally like my fantasy to reflect my reality and give me the vocabulary and process to make it better, or at least see it more clearly. There’s nothing wrong with lighter fare, but this is what will get my attention reliably.

More than a few, but paying freelancers livable wages (even if it means shrinking the density of content) is the big one. There’s tons of ways to unpack this, and tons of reasons that workloads are overweighed and underpaid, many being unintentional for the majority of the market. In some ways, that’s made it even harder to check. The flipside is that I’ve had ADs in the industry say things along the lines of “artists take (RPG work) on as a hobby, nobody is doing this for full time work” and that sentiment really blew my mind. So many really talented artists spending so much time, money and effort perfecting craft and that’s a sentiment that’s we might be competing against when trying to navigate to a workable and healthy architecture of work. I think there’s a lot of wanting to do better on the business end, especially in indie RPGs, but the whole industry needs to (and is trying to) go through that learning process. The continued challenge to stick with those better principles I think is an instrumental change to the community’s sustainability.

When practicing magic, make sure to add salt!

And thank you for your time, Tracy!