About DC, in their own words:Â I’m a Black queer non-binary game designer from the SF Bay Area in California. I started designing games officially a little over a year ago. Since then, I’ve resolved to better representation for PoC, especially QTPoC in ttrpg spaces. That includes designing games based in my experiences as a QTPoC, facilitating communities, and building/supporting initiatives that assist PoC.

Tell us a little bit about yourself and your work? What project are you most proud of?

About me? There’s not much to say, I think. I was born and raised in the San Francisco Bay Area. I’ve always been a little weird; the kind of 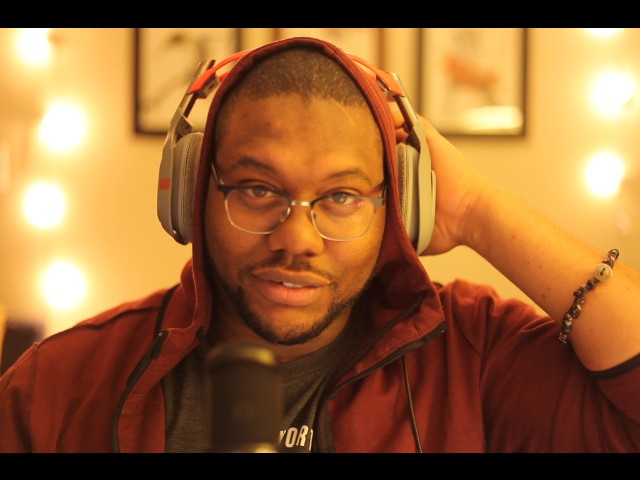 person that doesn’t really fit into a category. In my adult life, I’ve hopped around from job to job, trying to figure out what I want to do with my life. A lot of that time has just been soul searching, which games have been a large part of. Most of my earliest memories include feasting on some kind of media. Music, comics, video games, board games, movies, books. I can’t live without good stories, and the languages we use to tell them. The project I’m most proud of is Mutants in the Night, a Forged in the Dark game that has pretty much defined my life as of late. It’s really just about being a marginalized person in the real world, but coded in a way that lets anyone take a seat at the table and experience all sorts of intersections. Mutants are a perfect allegory for marginalization, so I took it and ran to a place that major players like Marvel haven’t. My blackness made this game what it is.

Intersectionality. No one is just one thing. There’s always context. We’re people existing next to, around, and with, other people. The experiences we have shape us, and the environments we exist in. Someone can be well off financially, mentally, physically, etc, but the people around them and the influences we have on one another still shape what we know, and how we go about being human. Marginalization is the clearest cut of that, and honestly bears the most amount of value when it comes to understanding ourselves. When we draw lines in the sand for who may or may not, it’s that line that has the most to learn from. There’s a perspective there that extends one line to two, and two lines to three, and eventually you’re living in a box, afraid of being close to anything that isn’t you. Is that power, or weakness? Who is trapped and who is free? That’s where my work exists.

I got into games because it’s what my family was into. I caught on quickly. Games are really about language and communication. People play them to, in my experience, talk to each other. Often through the context of what’s being played. When I was drawn into tabletop roleplaying games, I saw another avenue to spend time with my friends, and to be something other than a poor Black kid with no desires in the world but to spend time with people and listen to music. I wasn’t fully successful with escapism, but that’s another story for another time. I don’t try to emulate anyone other than the self that I hope to be. At least consciously. I have an amazing mentor, Avery Alder, and a lot of support from experienced designers and experienced industry folx, but I don’t try to be like any of them. Mostly because what brings me the most internal and external success is being myself, as boldly as I can be. Mutants in the Night isn’t the only game I’ve written, but it’s the only game I’ve put significant time into. Only because it’s the most realistic definition of who I am and what I aim to do in gaming, as me presently.

My general advice is to be yourself. That means doing what makes you happy, and living what you love, when you have that choice. Community is wildly important. I have a saying. “It takes a village to be a human being.” Find people to support and who will support you. Not just in your work, but in your life. Whatever kind of work you do in the industry will challenge who you are, in my experience. A solid foundation will keep you rockin. Lastly, learn the skills outside of creating. Capitalist skills. Marketing, contract negotiation, rates and expectations and your value as a creator. Know your worth so no one can take advantage of you. They’ll try, maliciously or not.

The stories of individuals. We’ve had “the hero’s journey” redone a million times, and people are bored as fuck. Whichever super niche story you want to tell is ten times more interesting, personal, and important right now. So make it. Other important things, accessible information! We have more now than ever. The bar is fairly low when it comes to figuring out how to start designing. The same designers who make the most popular games and hacks, in both the professional and indie spaces, are responsive and available online. Although there are definitely struggles in finding groups that fit individual safety and comfort needs, the entrance is wide open.

What’s your most meaningful gaming experience?

That’s a tough question! Playing Mutants in the Night is honestly the wildest thing in the world to me. It’s a game that I made, that I absolutely love playing. Sometimes I forget how much I enjoy seeing people create their characters and the worlds they exist in, and to me that’s one of the most meaningful experiences I’ve ever had, in or out of gaming.

Definitely a movement in the better treatment of (QT)PoC. People don’t realize that we spend time using whisper networks, taking care of one another, and trying to keep one another out of horrific situations that the community at large puts us through. We’re largely underpaid, commonly used as a check mark inside of someone’s diversity box, and stuck inside situations where “white allies” are actually abusive and manipulative behind closed doors. We know who these people are, and there are tons of them. But many of these white men own their own businesses, or work for no one. They have large fanbases, a lot of money, and the ability to choose how much “diversity” they want. It’s not about what’s needed as much as what level will keep people buying their product. So the most important change I could see happening would be holding these people accountable. Watching how many (QT)PoC they actually promote, recommend, have on their shows, and put their money behind. The community pats people on the back for doing the bare minimum, because the community isn’t actually comfortable with seeing (QT)PoC succeed more than them. I know that people are going to be super upset hearing that, but go ask Chris Spivey (creator of Harlem Unbound) what kind of things people said to him when his book won awards. Then we can talk. Hold people accountable.

My goal is to change the world in whatever ways I can. That means being honest, making the best creations I possibly can, and living to better myself. I’m just me, and I can only do so much. But if I’m bold in what I bring to the table, it will remind people of how powerful they can be, if they choose to be.