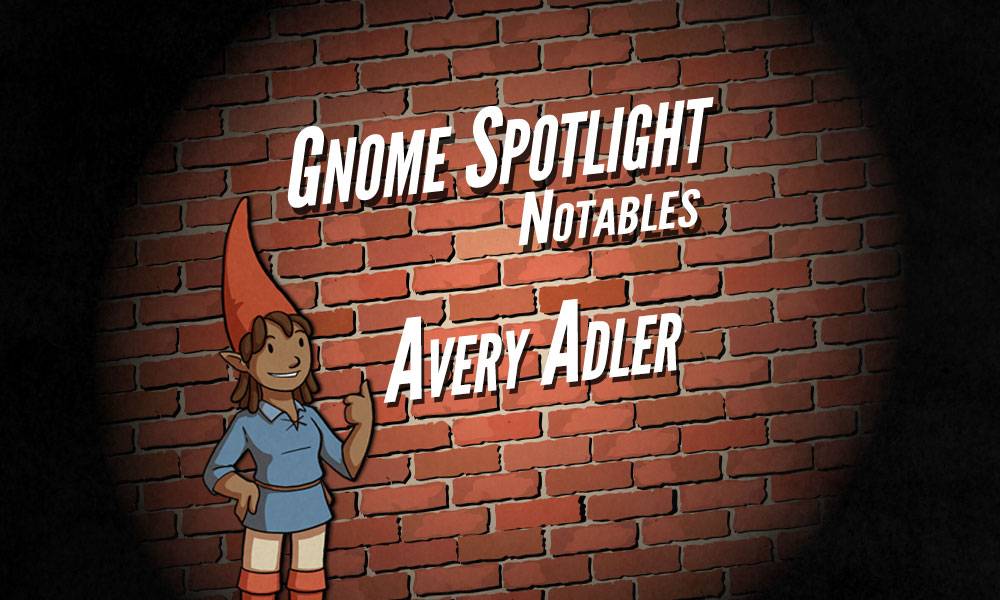 Welcome to the next installment of our Gnome Spotlight: Notables series. The notables series is a look at game developers in the gaming industry doing good work. The series will focus on female game creators and game creators of color primarily, and each entry will be a short bio and interview. We’ve currently got a group of authors and guest authors interviewing game creators and hope to bring you many more entries in the series as it continues on. If you’ve got a suggestion for someone we should be doing a notables article on, send us a note at headgnome@gnomestew.com [1]. – Head Gnome John

Avery is an experienced game designer interested in bringing meaningful and easy-to-learn games to a wider audience. Emphasizing collaboration and games where players decide ‘what is possible’, Avery’s games work to realize the potential for roleplaying games to challenge our politics, transform our lives, and bring about social change. Her works include: Monsterhearts, The Quiet Year, Ribbon Drive.

1.) You have a new game out! Tell us about your latest game on Kickstarter. It’s called Dream Askew?

Yes! My latest project is on Kickstarter [2] now! It is actually a split book with two games that are sort of companion games. I wrote Dream Askew, which is about a queer community amid the collapse of civilization, where the characters are influential people and explore what they would do with all the potential and scarcity that they now have. It is explicitly about a marginalized community banding together, and acknowledges that the apocalypse won’t reach everyone at the same time. I like that all of that possibility could be really hopeful… Benjamin Rosenbaum’s game Dream Apart is about being members of a Jewish shtetl in 19th century Eastern Europe. Both are designed as diceless and gm-less games that are good for seasoned players but are also beginner-friendly.

2.) Tell us a little bit about yourself and your work.

I have been designing games since high school and have explored a lot of different themes and approaches, but I keep coming back to themes of self-doubt, troubled communities—with conflicts like ideological differences—and relationships, queer community, and the post-apocalypse or exploring what would happen after the collapse of civilization. My games don’t focus on despair and suffering though. They focus on finding out where hope survives in that process.

I am really proud of my game Ribbon Drive, which was a freeform game that used songs from music playlists brought by the players to inspire the scenes and framing that players responded to in the game. For me, this game was about players coming in with a vision of the future—the places the game would go—and learning how to re-examine, and eventually let go of, that vision.

In 2012 I released probably my most popular game, Monsterhearts, where players are teenage monsters—both literally and metaphorically. They are teens making sense of their changing bodies and social worlds, while being monstrous creatures with their associated behavioral traits. This game had a lot of queer themes, with monstrosity standing in as a metaphor for a lot of things, but especially queerness. Sexuality and its confusing ambiguities are core mechanic for the game.

I also designed The Quiet Year, which is a map drawing game about a community that has survived the collapse of civilization and is trying to rebuild. It is sort of a combination of board game, world building, and abstract poetry exercise!

3.) Can you tell me a little bit more about how you make those thematic choices? Are these intentional and goal oriented? More personal?

I think it’s a mixture of personal interest and goal. I have lots of ideas and start working on lots of games and then abandon most of them…so the ones that have a burning need to be created are the ones that make it through. They are the games with themes I find really compelling, and that do mechanical things that push back against prevailing design trends…or build on those trends. There was a period in the indie design community when every design revolved around scene-level conflict resolution mechanics, and play pushed toward these conflicts in every scene. Ribbon Drive was designed as a game where you didn’t have conflict, and even when there were obstacles you could take a detour. You couldn’t use traits in the same scene that you introduced them. I think it’s important to have games about learning humility and self-reflection, not just conflict. One factor in choosing these elements is that they feel like a timely contribution to the community at a meta- level. Play can serve to promote belonging to a world working towards revolution and looking really critically at our own goals and actions. The games I design that make it to production really further that…it’s not coincidental.

4.) How did you get into games? Was there a memorable or meaningful gaming (or design) experience that encouraged you to get involved?

I have always been excited about games. D&D 3.5 was my first RPG experience. I was in a logging town where there weren’t a lot of opportunities, but with D&D I was able to imagine a world bigger than my small town. I was playing with a group of boys who were all smarmy know-it-alls, and would argue that the one GM-ing was wrong or could have done better. The games would always fizzle. From the get go I could see the potential in the medium and see us all having trouble accessing that potential, and with all our play styles wanting really different things. So I started designing my own games pretty quickly to try to see how to make the play experience better. I released my first game a month after I graduated high school.

Paul Czege wrote My Life With Master, the first indie role playing game I ever ordered, and it was the game that introduced me to tight minimal design. In that game, you play as a minion to an intimidating master—a figure like Dracula or Frankenstein. There was the tension of wanting to do something for your master while also knowing you can’t escape them, but slowly developing curiosity about the townsfolk and the bravery and competence to overthrow the master. Your character was represented by only a few stats: Self-Loathing, Weariness, and Love for the townsfolk was all the definition that you needed. Czege’s focused, minimal, tight, thematic mechanics really informed the kind of designer I became.

6.) Are there any important changes you see (or would like to see) occurring in the industry?

I have seen more games by and about women, which is really exciting. I see women designers getting a spotlight more often and also more queer themes being included in stories—both by queer designers and by designers working to exclude fewer people from their stories. I also see a push for diversity generally, and more conventions thinking about diversity of guests they bring out…but I see most of that push for diversity in ways that focus on gender and sexuality and not on race. I’ve seen panels on bringing diversity to the games industry that are all white, so I’d want more designers of color to be given guest spots at conventions and to get their work spotlighted more often. And maybe more attention on decolonization led by indigenous people in the community. From a design perspective, the thing I’d really want to see are games accessible to new players and that play in a few hours (ex. Jason Morningstar’s games point a way forward). I work to design games that are mechanically simple, but they still typically require a lot of high concept thinking and take 3-4 hours. There aren’t many games that play in just one or two hours.

7.) I’m glad you mentioned the time commitment that many RPGs take. Are there other ways these games could be more beginner-friendly?

In terms of a way that a book presents its concepts, not using acronyms is huge! Acronyms make it really imposing. In terms of design, games that require less math and that explain the concepts in the same place that you find them on the character sheet make them more accessible, so new players aren’t just looking down and seeing all these numbers. For play, thinking about making spaces accessible to new parents since many people have young children. In terms of themes, I think that as designers and storytellers we need to be really mindful about what themes will make sense to a general audience, and which are recursive tropes and memes that gamers have developed that are inscrutable to the outside world…like the progression of rat killing in sewers to becoming a demi-god doesn’t make sense to people who don’t already know it. If you are going to tell those stories and want them to be welcoming to new players, you really have to spell it out for new players…and what else might they know that looks similar. We like to think that these stories are like Lord of the Rings, but they really aren’t. The model for a D&D character arc is outside the usual.

I think a thing that comes up with my work is that people who are long time gamers have more trouble connecting thematically with what I’m writing than people who haven’t played RPGs before. For example, with Ribbon Drive, if you are coming in from D&D and Pathfinder as a point of reference to this game you are going to stumble more because really obvious cultural touchstones for some aren’t necessarily gamer touchstones, so people stumble over them.

8.) I am very excited for your new project. Can you tell me a little more about it before I let you go?

One of the really cool things about this Kickstarter project is the way Dream Askew & Dream Apart are in dialogue. They both are about marginalized communities that have created this place of belonging and possibility, while at the fringes of society. They build off the same themes but take them to really different places; in one case taking those themes in the context of a group that really existed, while the other is about a more fantastic range of possibilities. One asks you to build upon and explore your relationship to history, and the other asks you to imagine and build a world together. I’m interested in ways these games are both very similar and very divergent, and compliment each other and tease out the themes and possibilities of each. With Benjamin, thinking that if this project is about them both being a type of game, we’ve included a chapter on designing this type of game—encouraging people to continue exploring community, development, and juggling tensions and choices though game design. The book is not just a manual for how to play a game but is a manual for how to play a particular kind of game, as well as a piece that encourages you to design and explore further on your own.

I think it is really important to say that, in addition to Dream Askew & Dream Apart being rich games with powerful themes, I think they are really fun. Fun games that are for anyone. The first time I played Dream Apart we were high-fiving and laughing…it was just so fun to play!

Thanks for joining us for this entry in the notables series.  You can find more in the series here: https://gnomestew.com/notables [5]  and please feel free to drop us any suggestions for people we should interview at headgnome@gnomestew.com [1].