Gnome Stew Invades Con On The Cob!!! and a Little Advice For Surviving Convention Games 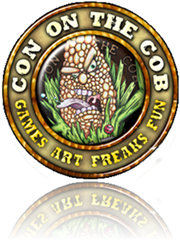 Last year I did a review of a local convention in Hudson, Ohio called Con On The Cob. It is one that I attend every year. You can read all about it in the review, but I have to unabashedly say that it is one of the most awesome conventions I’ve ever been to. The size is just right to meet and hang out without it being too small, there are enough tabletop games to keep me happy as a player, and there are lots of other events like comedy music, boardgames, video games, etc. to keep anyone of any geekish interest happy.

Ok John, we get the point. You want to have Con On The Cob’s frizzy haired babies. Ok, yeah I like it, but I also got Patrick there last year and from all the talking we both did about it at Gencon, we’ve roped Phil and Kurt into coming and checking it out this year.That means that around 30% percent of the gnomes will be at Con On The Cob this year. That’s an impressive amount of gnomish awesome to fit into a small convention, and at least three of us will be kilted. I don’t know if the convention will take it.

If you’ll be at Con On The Cob, come and say hi and hang out with us. Our mugshots are below for easy reference. Aside from hanging out with us at Con On The Cob, you can pickup copies of Eureka from the Silvervine Games booth. If you won’t be lucky enough to hang out with us there, we might take gnome photo requests(kilted gnome conga line? Drop it in the comments and maaybe we’ll do it.) or try to whip together a podcast or video gnomet when all four of us have a chance. We’ll be presenting a seminar on utilizing Eureka, and you can be sure that will be going up as a video.

Game Mastering Convention Advice
Ok, Gnome Stew is all about the Game Mastering and I can’t ethically write an article without doing something to benefit the Game Masters out there. While some might argue that merely letting you know where Gnomes are so that you can hunt us down and rub us for gaming luck is enough, I prefer to take the high road and drop some gnomish nuggets of wisdom about running convention games, especially at conventions that are smaller than the big boys. Here are some tidbits of advice for running convention games and some links to great articles from the past.

So that’s it for this humble article. What are some of your favorite local conventions? Do you have any outlandish request for gnome photos (we bow easily to peer pressure)? Any topics you’d like to see the four of us cover if we find the time to do a video or podcast?

4 Responses to Gnome Stew Invades Con On The Cob!!! and a Little Advice For Surviving Convention Games