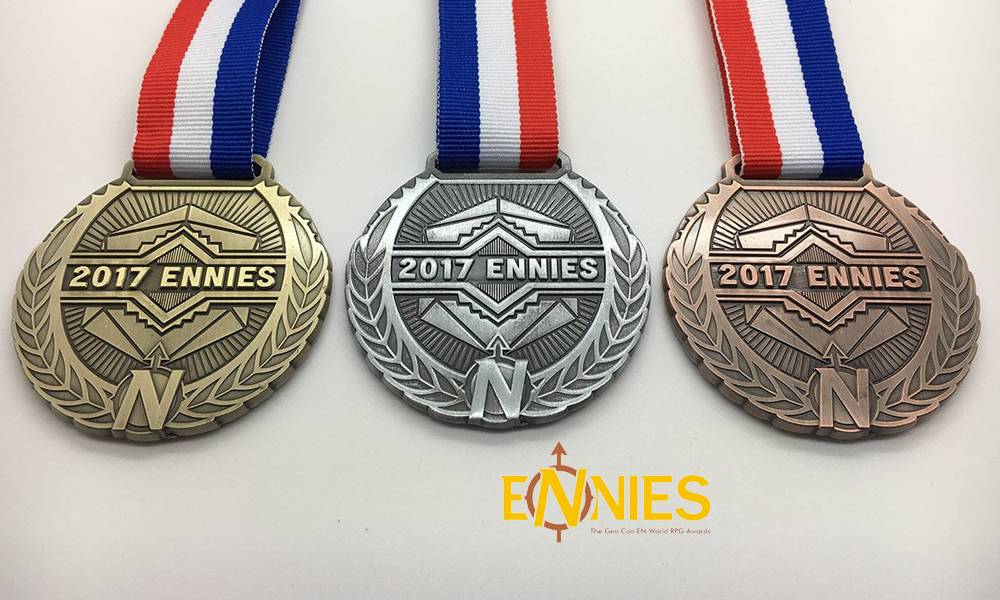 Hey Gnome Stew fans! ENnies voting time is upon us and there are a ton of great products nominated out there. Of course, we’d love it if you’d vote for us in the ENnies for Best Blog, but we also reached out to all of the gnomes to get our individual ENnies picks.

Â Shadowrun Sixth World Tarot Deluxe, Catalyst Game Labs (Best Aid/Accessory)
This one is my pick mostly because of the art. I have adored Echo Chernik’s artwork for quite a few years now. I found her art booth at Origins one year and fell in love. One of her prints sits across from me in my office. I’m also a big fan of the Shadow Run setting, so getting to see her art bring that to life is enough for me. It’s also a pretty neat idea for an accessory.

Hobbs and Friends of the OSR, Misdirected Mark (Best Podcast)
I have to give this one to the home team player. The GnomeCast is part of the Misdirected Mark Network and Hobbs and Friends is another show on the network. While I am not an OSR player, I really appreciate the dedication and passion that Jason Hobbs has brought to his podcast. Even if we play different types of games, we’re all in this hobby together.

Up to Four Players, Up to Four Players (Best Website)
I LOVE THIS WEBCOMIC. I know I found it a few years ago and it only updates once a week, but I love what Aviv and Eran have been doing with the comic in the last year or so. They deftly weave education about RPGs, both in general and in specific, among a fun and engaging story with fun and beautiful artwork. If you’re looking to start a Savage Worlds campaign for newbie players, definitely have them read through some of these.

Bluebeard’s Bride (Best Production Value)
This is literal one of the most beautiful books I’ve ever own. The game itself leans into body horror and the psychological horrors of abuse and gender roles in a way that I’ve never seen before. I’m truly surprised that it wasn’t nominated in more categories.

Predation (Best Setting)
I was excite when I heard the premise of Predation and Shanna Germain really delivered. It gives us time travel, cyborg dinosaurs, and the best pet/familiar mechanic that I’ve ever seen in a game. She’s an amazing writer in general and this is the game that made me love Cypher System.

Star Trek Adventures (Best Rules)
I did a review of this product, and despite using the same base 2d20 systems that other Modiphius games use, it does an amazing job at modeling how to resolve situations in a manner that feels like the source material.

Predation (Best Setting)
I also reviewed this one, on my personal blog. I know what I am, and what I am is someone that is a sucker for cyborg dinosaurs mixed with time travel. This is a great setting, and one of my favorite Cypher System supplements.

Esper Genesis (Best Free Game)
I reviewed the full version of the Core Manual here on Gnome Stew, so I’m inclined to recommend the free version of the Esper Genesis rules. I wish they had struck new ground as far as using terminology like race in the game, but they also did some amazing things in their effort to make the game familiar, but still a unique space opera iteration of the 5th edition D&D OGL rules.

Red Markets (Best Game)
Red markets is way beyond a standard zombie game. It looks at the tragedies of survival with a lens of what you’ll do to survive in the fringe.It’s a phenomenal setting and is well worth checking out.

Tabletop Audio (Best Free Product)
Oh man, I use Tabletop Audio for every game I run anymore. It’s phenomenally easy to use and really adds ambience. The care and attention they give to their audioscapes is phenomenal, and they are great to use on the fly.

Harlem Unbound (Best Cover Art, Rules, ETC)
This game is so important. It has Harlem in the title, on the cover, and in the fully realized spectacular setting of the book. I’ve never seen another RPG with Harlem in the title, and as a center for black history in America this is a monumental and important nomination.

#Feminism (Best RPG Related Product? lol)
Feminism is a series of short roleplaying games that can be played in one setting. I’m not sure why they’re calling it a related product but I’ll take what I can get. The games were created by women all over the globe, and there’s not another book out there like it. It has been displayed in museums, played in college design classrooms, and educates through play different feminist issues. VOTE FOR THIS ITS IMPORTANT.

Bluebeard’s Bride (Best Production Value but should also be best game)
Also a landmark game, designed by three women, gorgeous artwork inspired by the gothic horror themes within. Incredibly innovative because the mechanics of the game mimic the horror of abusive relationships and the feeling of being gaslighted. This game deserves so much more recognition than this!

Starfinder Core Rulebook: (Product of the Year, Best Art, Interior)
This is probably a shoo-in for Product of the year. Paizo has taken the lessons they’ve learned fro their wildly successful Pathfinder and applied them to Starfinder, simultaneously using Starfinder as a test bed for some of the system tweaks they’re rolling out in their upcoming edition. What’s not to love there? But where I really want to praise this book is the art. It falls into two main categories. Cool character art that makes you want to play the game and kick-ass two page spreads that would be as much at home as a sci-fi coffee table art book as they would be in a game.

Eclipse Phase Second Edition: Quick-Start Rules (Best Free Product)
So what can you say about Eclipse Phase? This game is the perfect blend of the two genres of sci-fi: the all action space-opera science fantasy and the highbrow “concept” sci-fi. The setting feels unsettlingly familiar and at the same time, truly alien, and it’s focus on transhumanism makes you think deeply about mankind and his place in the cosmos… While you’re tossing EMP grenades at sentient clouds of flesh eating nano-bots.

Sly Flourish (Best Blog)
OK, OK, I think we ALL know which entry for best blog I’m HOPING you vote for *cough* Gnome Stew *cough*, but let’s be fair, the other blogs on this list are great too and I would be remiss if I didn’t say that if you DON’T vote for us, Sly Flourish is a great choice. Hell, I like his articles so much I was convinced to buy his Lazy Dungeon Master book. What better endorsement is there than that?

Elven Tower (Best blog, best website)
Derek Ruiz’s nomination is significant. He’s a community content creator for the DM’s Guild, and a few other place, through his patreon account. It’s great that Derek, a yeoman game designer and artist, is getting recognition on a community content platform, one of the new avenues for publishing in the rpg scene. (Disclaimer: I contributed to a product that Derek also created material for).

Symbaroom Karvosti – The Witch Hunter, Jarningen (best cover art)
I haven’t a clue what this game is about. But I want to know more! Martin Grip’s bleak depiction of a snowy trek is so compelling. Modiphius is known for its great art, and this part of that tradition.

Dry Erase Gaming Tiles (best miniature)
Here is a product with so much utility. Maps that keep going. For a dungeon crawl, these puzzle-pieced dry-erase blank map cards get instant use in a fantasy exploration game.
(OK, I admit. I also want those Star Trek minis that Modiphius is selling, which gets a nod in this category, too. It’s a mini Worf! Who doesn’t want a mini Worf?)

Gnome Stew (Best Blog)
I’m proud of the diverse voices and in depth subject matter addressed by my fellow Gnomes at the Stew and it is only getting better. Representation matters and the Stew is where people can reliably go to hear fresh voices discuss table top gaming.

Harlem Unbound (Best Setting, Best Rules, Best Writing, Best Cover Art, Product of the Year)
While many role playing games specifically exclude racism from their settings, Chris Spivey and Harlem Unbound trust that players are capable of exploring this subject matter in a mature fashion through game play. It creates the opportunity for players to have visceral experience of the impact of discrimination in an effort to build empathy and understanding. In my opinion empathy generation is the highest calling of RPGs because it has the power to change the players in the real world. I applaud Harlem Unbound for creating the framework to thoughtfully explore this subject matter. This is moving role playing forward as a timely and relevant art form and as such has earned its place as one of the most important RPGs ever created.