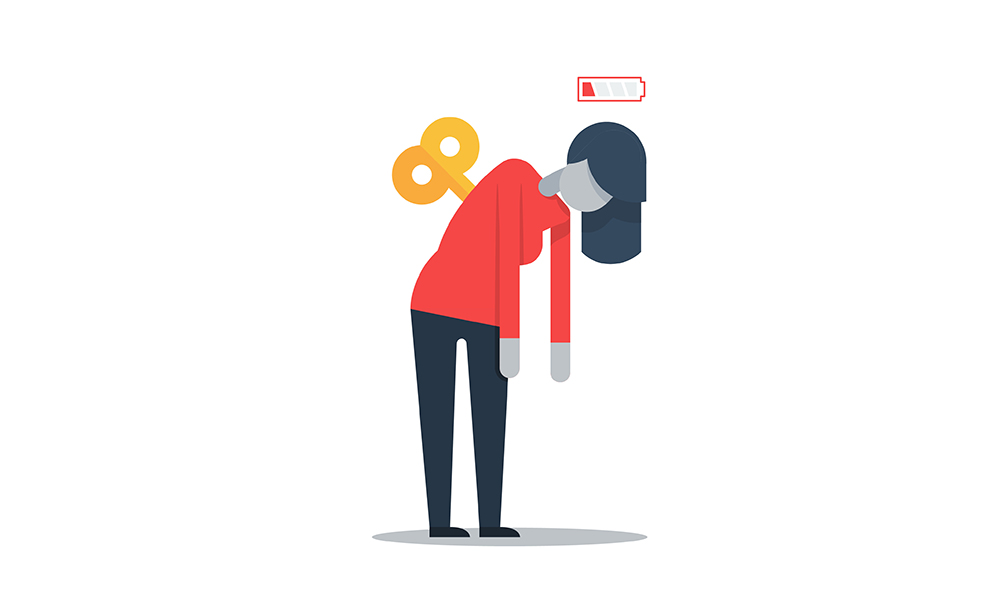 I wish it was as easy as just plugging myself in to recharge.

I have a bit of a conundrum I wanted to talk about. Even though I’ve been playing RPGs for decades, I had a late start as a GM. Because of that, or maybe because I’ve been a player more than I’ve been a GM, I often suffer from GM fatigue after running a campaign for a while.

What is GM fatigue? By my definition, it’s when the work you need to GM begins to become more of a burden than it was when you first started running the campaign. Even if you were super excited about the campaign, the fatigue can start outweighing the enjoyment the game once brought. This type of thing will vary from GM to GM and from group to group. The cause may be that the current game has lost its shine. Perhaps there are some interpersonal problems with the group that’s dimming your enthusiasm. Maybe some issues at work or with your home life are starting to impact the hobby. And sometimes the world is in the middle of a global pandemic among other issues and many of the things we enjoy become harder to maintain long term.

Even if you were super excited about the campaign, the fatigue can start outweighing the enjoyment the game once brought.
It may be some of that for me in this case, but I’ve found I always struggle with my stamina as a GM even during the best of times. I currently have been running for one of my every-other-Saturday groups since March. Before everything shut down, we were in the middle of my friend’s long running D&D campaign, which is one of my absolute favorites. The moment we realized the pandemic was serious business, we knew he was going to have to put aside GMing duties for a while. As an employee of the county healthy department, he was about to be very preoccupied. So, I stepped in and started running.

First, I ran a short Night’s Black Agents campaign. I recycled a concept I had used with another group, which may have been a mistake. I thought it was a solid set up, but right off the bat I was struggling with the game. To be honest, I didn’t like the PC’s characters. We were all struggling a little bit, so no one really brought their best to that campaign. We played through the four sessions it took to get through the opening scenario, but decided to set that game aside. I switched us to a Savage Worlds East Texas University campaign that immediately sparked more excitement in all of us. As GM, it was absolutely the right call to make, because I got super excited about putting the campaign together and the characters my players were bringing to the virtual table.

Six months in, and the game is still fun, but I’m finding it harder and harder to find enthusiasm for the minimum level of prep I need to feel confident running the game. Recently, I was dreading the start of the game and considering possibly canceling. That’s when I knew I’d hit GM fatigue.

To be honest, I struggle with a fair amount of guilt over this. Even though I know that my gaming group is a collaborative affair and several of us take turns running, my old school sensibilities still insist that a ‘true GM’ should be able to run indefinitely and if a campaign is good, it should practically run itself. If I can’t live up to those standards, how can I possibly consider myself a worthy GM, or how can my campaign be ‘good’.

Logically, I know this is a whole load of bull crap. There is no shame in my enjoyment of being a player in a game, and I know that helps me be a better GM as I always keep the player’s perspective at the forefront of what I bring to the table. It is also incredibly important that I be able to recognize my own limits and know when I need to take a break and when I should find a good end point or at least pause point for a campaign. Even knowing that, I still feel a huge twinge of guilt in asking someone else to take a turn as a GM.

I was honest with my group and we agreed that we’d take the East Texas University campaign to the end of semester and then pause the game. It’s a good stopping point and allows for a fresh start when they come back from break to Scooby it up for Spring semester. My friend who originally had to step back from running in March wants to get his feet wet running online before he picks any of his long-term campaigns back up, so he’s going to run us through a short West End Games D6 Star Wars campaign.

So, to any of you feeling similarly, go easy on yourself and recognize when you need to take a break. We GMs are a varied lot, so levels of GM stamina and break points of GM fatigue will also vary, but take a break when you need it. You and your games will be better for it.