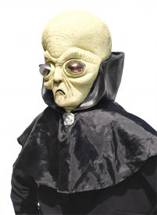 “I think a lot of filmmakers fall into the trap of thinking, Well if it’s fantasy I can be more flamboyant. But the opposite is true. If you are bombarding the audience with images they’ve never seen before, you want to keep the camera as real and truthful as you can, as well as the performances of the actors.

Substitute “GMs” for “filmmakers” and “players” for “audience,” and that’s a solid piece of GMing advice: Even though you’re running a game full of fantastical elements, the characters in that world need have believable motivations, and they should act — on some level — like real people (even if they’re orcs, Vulcans, robots or whatever). And even though what happens in the game is outlandish and larger than life, the way you describe in-game events needs to have an element of plausibility to it as well.

I know there have been times when I’ve been so caught up in how cool an encounter, location or NPC was that I forgot that vital element of believability, and wound up with a two-dimensional character or a scene that fell flat because it just didn’t fit somehow. Peter’s comment is a good reminder to avoid falling into that trap.