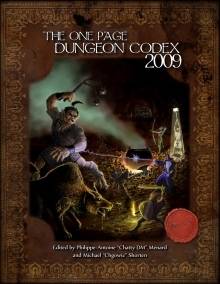 I love dungeons. Dragons, too, but mostly dungeons.

They fire my imagination in a different way than all of the other trappings and oddities of fantasy RPGs, and I love running them as a GM and scampering through them as a player.

Last year, Philippe-Antoine Menard, author of Musings of the Chatty DM [1], teamed up with Michael Shorten (chgowiz) [2] to run the one-page dungeon contest [3].

It’s a great concept: Outline a system-neutral dungeon on a single page, including a map. You can do a surprising amount with one page and a map, and it’s a cool format for sparking your imagination as a GM.

The entries ranged from serious to humorous, and there were some truly excellent dungeons in the mix. Those standouts have been collected in a free PDF: The One Page Dungeon Codex 2009, Deluxe [4], edited by Phil and Michael, and published by the fine folks at Tabletop Adventures [5]. 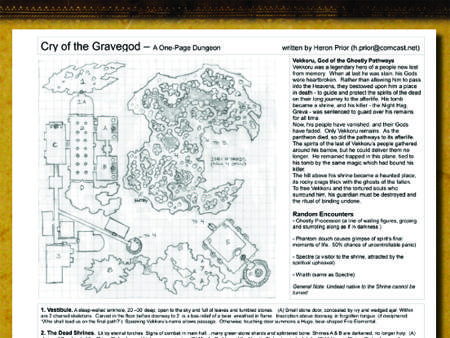 This is a good-looking PDF that includes more content than you might expect from 21 one-page dungeons: In addition to the dungeons, the one-page dungeon template is provided, along with background on the concept, advice on using the template, and ways to enjoy these dungeons in your game. The whole e-book clocks in at over 50 pages, and the zip file for the PDF includes both a screen-optimized and a printer-friendly version.

It’s impossible not to feel the enthusiasm Phil, Michael, the contributors, and Tabletop Adventures had for this project — and that makes for a fun e-book. I’ve been friends with Phil for a few years now, and while I don’t know much about Michael (other than that he seems like a good guy), I do know something about Phil: He has too much energy, talent, and publishing potential to let this project be his last.

And if you need still more one-page dungeon goodness, there’s also a PDF that collects all 114 entries in the 2009 contest [6].

There was also a one-page dungeon contest in 2010, though not run by the same folks. You can read about it here [7], plus see all the entries that have links, and grab a collection while you’re at it.

Will there be a One-Page Dungeon Codex 2010? The “2009” in the current compendium certainly suggests that — and I hope there will be.

Hey! Thanks for the post dear friend. I’m honored by your praise.

This project was the first one where I gave myself the obligation to see it through the ‘ugh, this project sucks’ phase. I’m so proud of it and I’m happy we decided to distribute it as a free product.

Both files in the downloaded ZIP are full color but feature a button on the second page to remove the interior background, making it printer friendlier.

The Ebook version has a lower resolution while the print version allows to print individual dungeons crisply!

There was a 2010 One Page Dungeon contest but I nor Michael ran it. Instead, Alex Schroeder ran it and the results were published here yesterday:

Finally a PDF of all 114 entries can be found here:

But I’m migrating all the individual files to the Tabletop Adventure site soon, hopefully, each file will be available then.

Oh and we’re putting this up for an Ennies in the Best Free Product categorie… I know the competition will be ferocious vs all those high quality quick starts rules, but I have faith!

Thanks for the kind words, Martin. And I am glad you like the final book. It was quite a challenge for me to join Phil and Michael on that project and do the layout. I’ve never done anything of that scope before and I am really happy how everything turned out.

And I can wholeheartedly recommend having a look at this year’s One Page Dungeon Contest winning dungeons. It’s always amazing how many talented people are part of the RPG community.

Oh, man! I totally missed the 2010 OPD! I entered the 2009 contest and was fortunate enough to receive an Honorable Mention. I was psyched about doing it again this year, but I never saw an announcement about it. How did you guys publicize this? Are there plans for a 2011 version yet? How did I miss it?

Hm, where would you have looked? I’d be interested in improving my list of places to notify!

You can look at the announcement and the list of forums I posted it to: [10]

@kensanata – Well, I do read EN World pretty regularly, so I must have just missed that. Other than that, I read Gnome Stew and Chatty’s column religiously. Although, of late, I haven’t had as much time to myself as I am in the process of trying to sell my house, applying for teaching positions in a half-dozen states, and working on a few other side projects. Should I get started now for next year?

[9] – See, that’s what I get for trying to publish a book — my ability to read enough to do basic homework goes out the window! I’ll edit the article to include your new info. Sorry about that!

I love dungeons, too, but they can definitely outstay their welcome when they go on for months of gaming. One page seems the perfect size.

OK, I didn’t win, but my dungeon (Necromancer’s Lair) is one of the 21, I hope somebody enjoys it, I had fun creating it! And this is my second time at it, and probably not my last, better luck next time, maybe!

[12] – Whoops, actually one of the 114, not the 21 – those were winners! Congrats to the winners, many of them were from my fellow members at Cartographers Guild!

[13] – Should you get started for next year? You should never have stopped! You cannot have enough one page ideas floating around for your games. 🙂

I missed this one as well, count me in for next year!

[14] – Oh, I never did stop. The contest springboarded a campaign that I have run for more than a year now. I have several 1-3 page adventures that would make excellent OPDs, and will for next year. 😉

I grabbed them and it looks great. The backgrounds and presentation are well done– it reads well and lures you from dungeon to dungeon. You want just one more…