This is the third in our series discussing the second of the five geek social fallacies as initially written about by Michael Suileabhain-Wilson [1]. Each day this week, we’re going to hear a different princess’s (author’s) thoughts on this. Monday we heard from Alana, yesterday we heard from Caitlin, and later this week we’ll hear from everyone else.  ~Ang 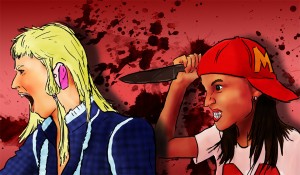 Geeks and nerds aren’t usually that violent, but some can be touchy enough to make it seem that way.

“Criticism may not be agreeable, but it is necessary. It fulfills the same function as pain in the human body. It calls attention to an unhealthy state of things.” – Winston Churchill

Geek Social Fallacy # 2 is “Friends Accept Me As I Am.” Carriers will never criticize a friend, and they view criticism directed toward themselves as a betrayal. Interestingly enough, carriers *will* accept criticism in other areas of life such as work or school.

Rationally speaking, how is criticism from a friend different from criticism coming from a teacher or a supervisor? Short answer: In my opinion, it isn’t. A teacher helps a student understand a concept or convey their knowledge in a clearer, more precise, persuasive manner. A supervisor helps their co-worker become more efficient and improve the quality of work produced. A friend offering criticism to a friend helps you become a better friend or perhaps even better as a person.

Allow me to explain. A friend has an investment in you and in the bond of friendship you share; there is an emotional attachment, and that attachment makes you care about not only your own personal development, but the strength of your relationship and the development of another person.

Providing constructive criticism to a friend is a preferable option to allowing conflicts to stagnate, or worse, escalate. If a friend is engaging in a behavior that is inappropriate and makes things uncomfortable for you or a social group you share, they will never know that they have done (or failed to do) something that has harmed you if you do not communicate with them. Communication and honesty– these are the things that keep any relationship thriving. Relationships also grow and mature, adapt and change, through conflicts and how those involved in conflicts react to them and each other. Conflicts are not necessarily bad; this article right here [3] explains why conflicts are indeed essential if you want your relationship to continue. Though this article deals with romantic relationships, the core ideas hold true.

A lack of being able to handle constructive criticism from a friend can cause an emotional knee-jerk response or a fight, so GSF2 people and friends of GSF2 people should be aware of this and proceed with caution– proceed. Do not avoid your problems lest you want to breed resentment and poison your friendships. In the article above, it states that fighting in a relationship comes from having skill deficits. Being on the receiving end of criticism means the GSF2 carrier can learn how to become an active listener, how to foster rational thinking instead of having that knee-jerk emotional response, and perhaps even seek out the roots of your personal insecurities and faults. Criticism can help you choose how you let peoples’ words impact you and how you interact with them, how you let yourself feel. Being able to choose to accept criticism is the pathway to healthy personal growth, mutual understanding between the people you care about, and overall better confidence.

GSF2 carriers– learn to view criticism not as treachery but as an opportunity. You can use that opportunity to promote your well-being and make your friendships stronger. It’s up to you to do that.

Friends of GSF2 carriers– use your discretion when you give criticism. Keep your voice level, and watch your words because they have power. Be careful giving unsolicited advice.

Special Note: If you are in any relationship– friend, lover, or otherwise– take a stand against abusive behaviors and walk away. If you feel consistently worse about yourself after you interact with a specific person, if you are threatened, if a person physically harms you or deals with you using emotionally manipulative behaviors or makes moves to isolate you from other persons you love… I encourage you to end that relationship. There are no circumstances in which such bad behaviors are acceptable. If you are unsure about the warning signs, here’s a list of examples at this link [4]. In your gaming group, you probably (hopefully) won’t see all of these, but it is important to know for yourself.

Note: Thanks to Chris Mann [5] for providing us with some back-stabby art to go along with the series this week.