Happy New Year! I hope you celebrated with those you love and didn’t wake up with a hangover this morning. (Or maybe just a tiny hangover.)

Every New Year begins with the hope that the awesome will far outweigh the suck in the coming months. Whatever happened in the previous year, especially the bad stuff, is behind us and the focus is on the good stuff in the future. While most New Year’s Resolutions are either completely unrealistic or forgotten about within a week of January 1st, it can still be a good thing to reflect on what we hope to accomplish in the coming year.

We’re all about gaming and related geekery here at Rogue Princess Squadron, so I thought it would be fun to ask the my fellow princesses what their goals as gamers are for the coming year. Here’s what they shared: 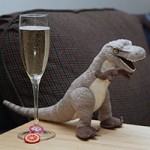 Tyrannosaur and champagne… what more do you need?

Happy New Year!  Or whatever calendar you’re using!  It may be the middle of the year for you, I don’t know.

Everyone’s making resolutions, or so the radio and internet are telling me.  I’m not usually one for New Year’s Resolutions, since I’m much better at starting something on the date I think of it.  But – my gaming resolutions – well, that’s different.  Since now I’m thinking about them.

Firstly, I’d like to play more.  I’ve moved around an awful lot in the past few years, and with that comes the loss or dissolution of different gaming groups.  I’ve played Eberron in Massachusetts, 4.0 in Texas, and Pathfinder in New York.  But now that I’m back in New York, to stay (I hope, I’m sick of moving), I should really focus my efforts on finding a semi-consistent group to play with – or run for.  After all, I’ve already got the friends nearby; all I really need to do is figure out a time that works, each week, with my changing schedule.

Secondly and certainly related to the first, I’m going to try harder to keep up my GMing journal.  Yes, I keep a GMing journal.  The front part is for adventures, the back part is for research and ideas.  I’ve lost a lot of useful and interesting ideas because I haven’t written them down, and especially if I want to run a game, I’ll have to be precise about taking notes, checking rules, and keeping logs.

Third, I’ll be hitting at least two cons in the next year.  I need to write about them!  I’ll see if I can’t pin down a local celebrity and interrogate — I mean, interview them.

And lastly, I’m going to try to play more computer games.  I know, it’s not RP related, but I’ve finally got a computer that can play some of the games I enjoy, and drawing inspiration from video games is as legitimate as anything. 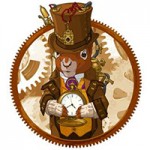 It shall be a most esteamed event this year…

I already know exactly what I want to do for 2014! First, I want to make sure the weather won’t stop me from going to Running GAGG this year like it almost did last year. No more blizzards, but just in case, I’ve scheduled a couple vacation days I’ve been squirreling away (pun intended because squirrels theme for GAGG) to prepare for potential bad weather. This year, I also want to get to either Origins or GenCon, but I haven’t decided which one yet.

Another thing I want to try is to find out if I can make a role playing campaign combining Dresden Files and Serpent’s Tongue. My boyfriend, Ari, and I basically each came up with the idea separately and approached each other about it at the same time. So far we’ve got some interest from our friends to play it, but I’d like to run through all of the Dresden books first and get very familiar with both Dresden role playing system and Serpent’s Tongue and see how to combine the two for a really fantastic open campaign experience. 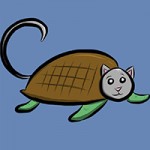 It’s a turtle AND a cat!

Let old a-gaming be forgot,
and never brought to mind. . . .

For me, 2013 was a pretty fantastic gaming year. It began with Running GAGG, was punctuated by JeffCon and my first Con on the Cob, and has come to a close with Christmas presents of Cards Against Humanity and Seven Wonders and all its expansions given as a joint gift to myself, my brother, and my two half siblings. Christmas Day was spent playing two rounds of the aforementioned Seven Wonders (after spending 40 minutes reading the rules for the basic game) and about six thousand rounds of We Didn’t Playtest this Either/We Didn’t Playtest this Legacies (which I had given to my half-brother as a present).

Next year I have about a million things I want to do, though that’s pretty par for the course. Seeing Frozen has rekindled a deep-seated love of animation in me, so I’ve been drawing like crazy. Which actually leads into some of my gaming goals for 2014:

My boyfriend and I have been working on our own game, VIRTUS Academy, (VirtAc for short). I want to get basic rules done to test-run it in time for this upcoming Running GAGG—it’s rapidly approaching!—so we can run three sessions there. Here’s how that links into the animation stuff: I want to do all the illustrations for VirtAc myself, and since it’s a Super Powered Teens going to a School for Super Powered Teens sort of game (if you really, really simplify it), I’m going to have to draw some really fun, dynamic and dramatic stuff.

Also for Running GAGG we intend to run a Dramatic Roleplaying style game, the (tentative) shortened title of which is A Whale of a Tale or Two. Inspired by the Decemberist’s song The Mariner’s Revenge, the story has a Victorian-feel . . . and all of the PCs start off in the belly of a whale. Since we have a terrible reputation of writing the final characters the day before the module is about to run, my goal is to get everything written a week before Running GAGG, actually giving us some time to review and possible improve what we’ve got.

Hm, you know what, “Get Events Registered for Running GAGG” might be a good goal-launching-point for all this.

Other goals, in no particular order: 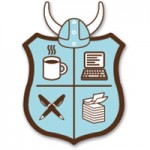 Are you brave enough to try it?

In the New Year I’d like to work on some more game scenarios and actually run them. I got the itch for it during NaNoWriMo this year and I really enjoyed it. So I’d like to make more time for it. I’m currently refining my Dread TV scenario and expanding my Faerie Tale campaign. I’m hoping to make the Faerie Tale campaign sound as interesting to other people as it is in my head.

Something else I’m doing is cutting back on my spending this year. I went to a lot of conventions and spent way too much on Kickstarter. I love Kickstarter for all of the amazing things it has started; I just need to pick and choose better which things I’m actually going to use or games I’m going to play. Even with my Monday Game Night I still have some games collecting dust. *sigh* Poor games.

That reminds me, I also need to remain committed to Monday Game Night. It gives me time for myself and time spent where I can step away from the stress of work and family, where I can just have fun and be me for a few hours of the week. So overall I’d like to spend more quality time gaming, but less expensive and where I actually play the games I already own. 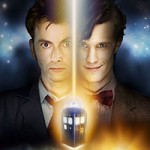 Going to miss Eleven, even if I’m mad at Moffat.

2013 was a pretty good year for me and gaming. Helping start this blog at the beginning of the year was definitely a highlight. We princesses had talked about it before, but actually getting it off the ground and turning it into something semi-successful has really felt awesome. We’ve still got room to grow, but I’m proud of what we’ve accomplished so far.

With actual gaming, I continued growing as a GM, both in my long-running Eberron/Pathfinder campaign for my regular group, and in the one-shots and pick-up games I ran throughout the year at conventions and various other places. It’s been a long road, but I’m finally starting to feel a bit more like I’m a ‘real’ GM or something.

I’m hoping 2014 builds on what I’ve already started, but here are some of my specifics for the coming year: