Game Review: Sentinels of the Multiverse

Much like a couple of my fellow Princesses, I am a huge fan of superheroes. I grew up watching Batman: The Animated Series; Spider-Man; X-Men; and many other cartoons where people in tights saved the world. When the first X-Men movie came out, I dove into the world of comic books and didn’t emerge until writers cycling so fast through titles all the characters acted like schizophrenics and the constant crossovers drove me back out again.

Er, sorry, that was a bit harsh.

However I’ve stuck with the movies and the cartoons and lord knows I drop everything to play in a certain friend’s Marvel Saga game as a pyrokinetic with some restraint issues. My boyfriend and I are in a constant “rebooting” state of a game set in the genre.

Which is why when I saw a cooperative card game called Sentinels of the Multiverse sitting on the shelf of a local gaming cafe, I jumped on it before anyone else could steal my precccccious and prayed that I wasn’t in for a big disappointment. 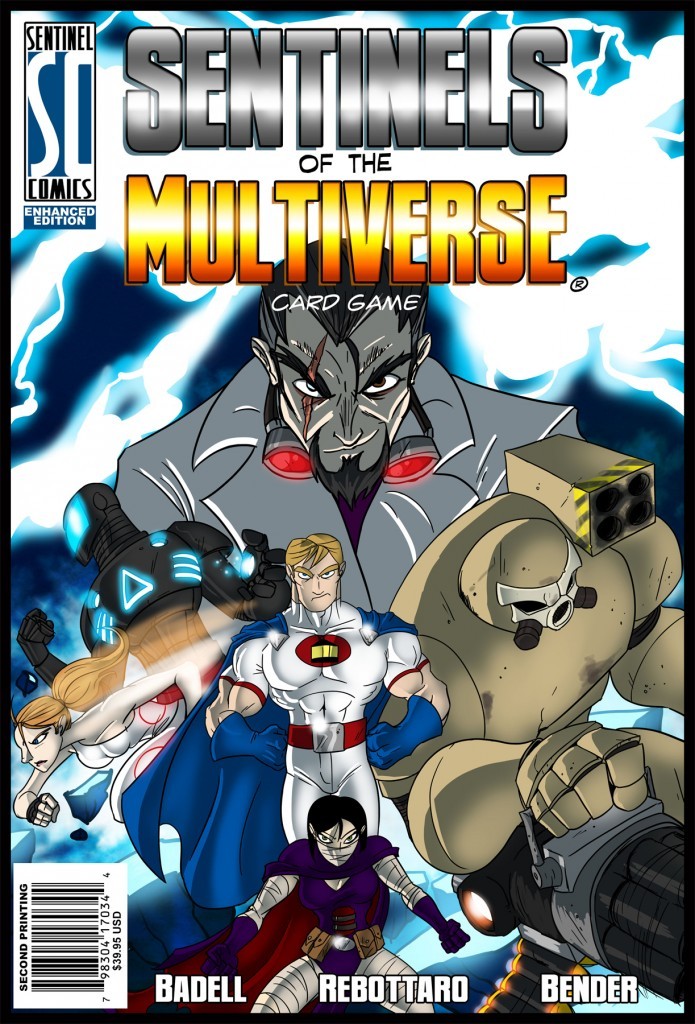 Sentinels is one of those games that has spawned from the age of Kickstarter. I played the “Enhanced” edition, which is to say the first edition had some serious balancing/storage/hit point tracking issues that were remedied after the first wave of buyers gave feedback. In the core set there are ten heroes, four villains, and four environments in which the good guys and the bad guys can throw down.

The heroes are good-natured rip-offs of old favorites, such as LEGACY (“Totally-Not-Superman”); WRAITH (“Totally-Not-Lady-Batman”), and ABSOLUTE ZERO (“Totally-Not-Mr. Freeze-As-A-Good-Guy . . .wait, what?). Others are perhaps a little more . . . obscure. 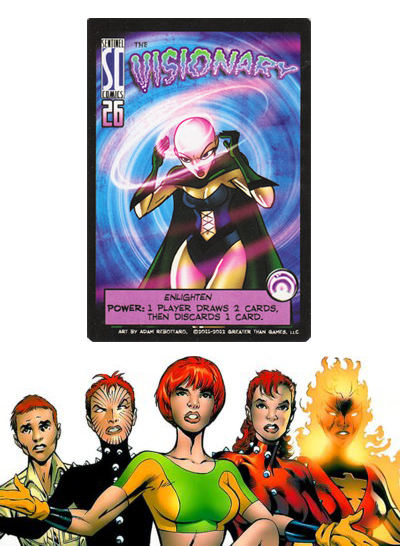 “This multiple timeline s#*t is getting really out of hand, guys.”

Each players picks a hero and takes their corresponding deck of cards. Every heroes plays differently. Some use ongoing effects to lay the smacketh-down. Others buff and heal their fellows. I played FANATIC and WRAITH in different games. Fanatic was all about damaging the enemy (sometimes at the expense of her own well-being). Wraith had gadgets that she could use to various effects. Personally, I preferred Fanatic, but I’m more of a fan of the “Punch ’em in the Face” method. 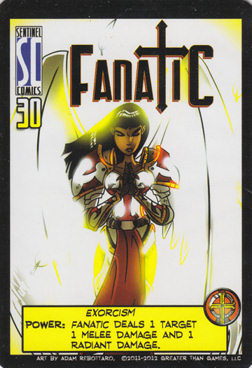 Or “Sword ’em in the face.” Whatever works!

The villains also get their own decks, and difficulty ratings. In the core pack they only have bad guys with the ratings of 1 and 3. And let me tell you, those 1s are no slouches. With the right sequence of cards, they can take out half the heroes’ health in one turn. The environments can throw a wrench into the heroes’ best-laid plans . . . or can prove to be the heroes’ savior. In one game I played, all the heroes were down to three or four hit points apiece. BARON BLADE (“Totally-Not-Dr. Doom/Lex Luthor”) had 30 HP and a few minions on the table. 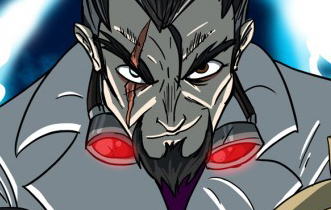 Suddenly a “Meteor Storm” hit the “Mars Base” we were fighting on and prevented damage to EVERYONE. Including us. And one of my fellow heroes had an ongoing healing power. We sat for a few turns, healed, powered-up, and then got rid of the meteor storm and laid the smack-down on the Baron.

Perhaps that’s what I like most about the game: the teamwork. My favorite superheroes always work in teams: The Justice League, The Team of Young Justice, the X-Men . . . but so often in Superhero RPGs I find PCs do their own thing. However, this game is all of the players against the bad guy. It takes a while for your basic “hide my cards” instinct to be overridden, but when it does, you and your friends collude to make the villain feel the hurt in the worst way possible.

There’s also a mechanic that when your hero falls in battle you lose your regular turn, but can buff the other heroes left fighting—in that same way when a heroes falls in a comic books, all his/her friends fight that much harder to avenge them.

Because everything is based on decks of cards, the fights are never the same. It also goes without saying that there are a ton of expansions that add heroes, villains, and environments, as well as new mechanics. Now, I haven’t gotten my hands on those yet, but I can tell you without a hint of hesitation that I’m looking forward to when I do!

1 Response to Game Review: Sentinels of the Multiverse