I like to have personal plots in my campaigns; plots that focus on a single PC at a time. I like to weave the scenes for these personal plots (or stories) into the overall fabric of the game, and typically have a “round” of personal stories come up between adventures/missions. This stretches out the personal plot over a longer period of time (see The Carter Way). Sometimes coming up with a personal story for every player is easy, and sometimes a bit harder. Looking for an excuse to put my Story Forge CardsÂ to use, I came up with a way to cast the overall plot and come up with a scene for each of my players.

One Scene At A Time

When I do personal stories, I like to do just one scene during a session. This way I can do a scene for each player, and not use up the whole session. Often I use the rest of the session to either resolve the past mission/adventure or to set up the next one. In a campaign, this type of session comes up every 3-4 sessions.

I always find that starting a story is the most difficult, because it comes to being without any prior lead-up. You have to start it in a somewhat cold manner, and once its up and running, it will take on a life of its own.

Previously I mentioned the Story Forge cards that I got from backing the Kickstarter. The cards are awesome for jumpstarting your imagination, but the arrangements of the cards that are offered in the instructions are more for full-length stories or in-depth backgrounds. They don’t address a single scene, which was more of what I needed. So I decided to come up with my own arrangement for the cards for casting a scene.

I wanted to create a single scene that had the following basic structure: PC meets NPC somewhere to discuss something. I came up with 5 elements that would make up the scene:

Different types of scenes may require different elements, which would require a different arrangement of cards. That turns out to be easy to do, as long as you know the elements you want to define with the cards. I figured to try it out the first time, I would keep it simple and use the framework mentioned above for all the scenes.

So I set up my arrangement to look like this: 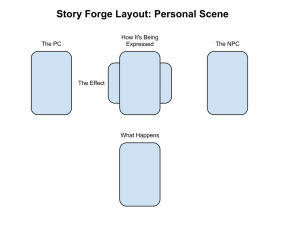 Then I pick a PC that I want to write for and cast the cards. When I read over the cards, I recall the background of the character and think about how to bring the elements together in a story.

Forge One On The Spot

Ok lets do one right now. This is not rigged, I am going to make this up on the spot. First we need a PC and NPC. I randomly grabbed two from Masks. The Mask’s Ally Sanida Aemountu (Miserly Adventurer, Female, Masks: #290) will be our PC, and the Neutral Captain Alvina Ardecorn (Cautious Guard, Female, Masks: #201) Will be our NPC. Both are fantasy characters and we will assume a default fantasy-type world.

The casting of the cards gives us: 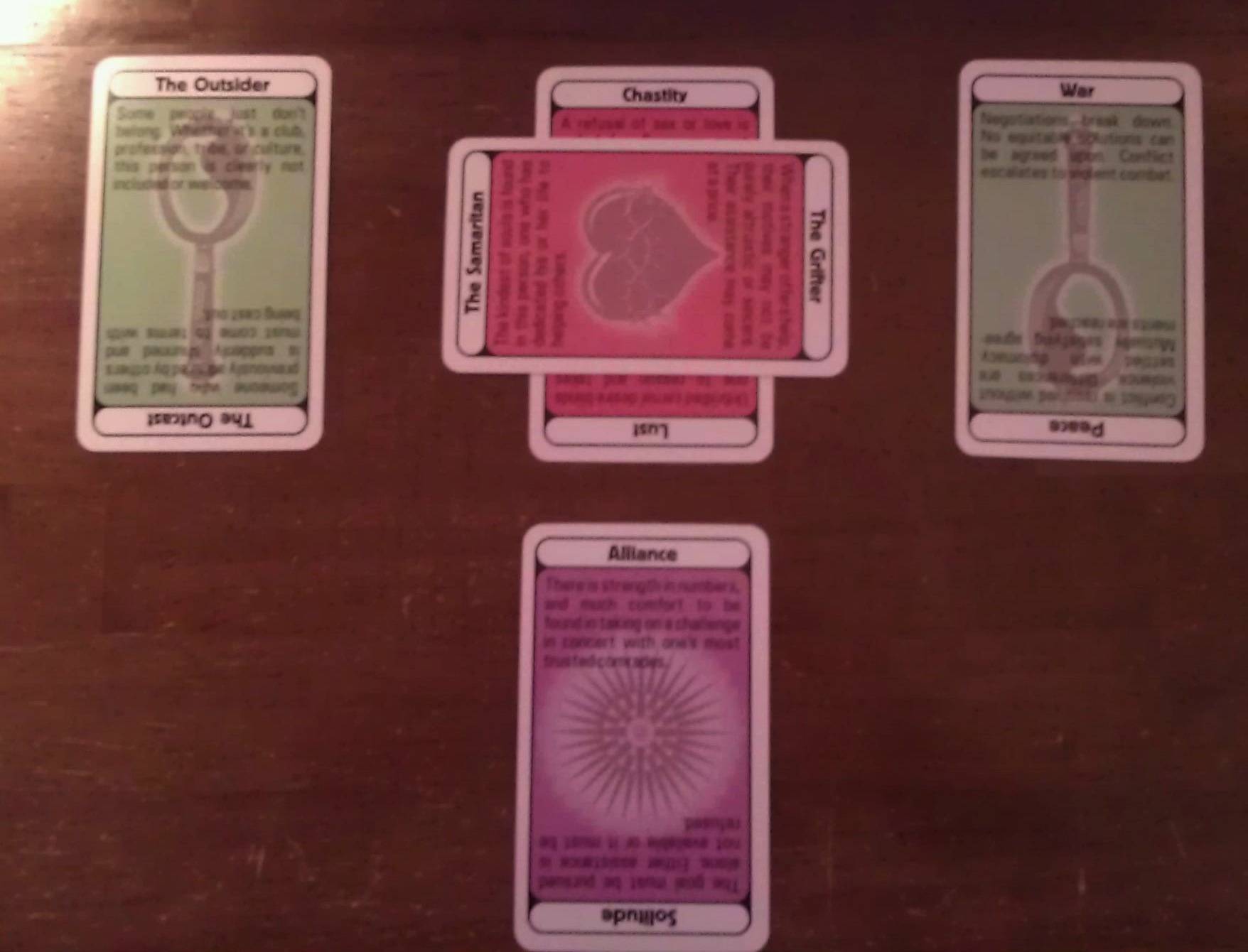 To make it clear if you cannot read the cards:

Putting that together I come up with this…

Sanida, a former slave and now devout warrior (from Masks) (Outsider) is meeting with the Captain of the guard Alvina to discuss plans of an immanent attack on the town (War). Alvina has shown an attraction to Sanida, but Sanida’s pledge to the church has prevented her from returning the feelings (Chastity). Alvina has gone out of her way to make sure that the church has any of the supplies it needs for the coming battle (The Samaritan). In the scene, Alvina is hoping to convince Sanida to have the church followers join the active defense of the town (Alliance), and not hide in the church.

Depending on when I choose to have the attack occur on the town, I not only have the scene for my upcoming session, but I have a story that I can further develop after this scene has been played.

No Forge? No Worries

You don’t need Story Forge cards to do this kind of exercise; though its a lot of fun. All you need is to understand the elements required, and have a way to randomize those elements. A traditional Tarot deck would work (since it was the inspiration for the Story Forge cards), so would a random list of feelings, locations, and events.

Once you have the elements randomly defined, it comes down to seeing how the pieces fit, then crafting the story and the scene. If you are practiced in this type of brainstorming, then it should feel pretty natural. If you are not skilled at doing this, personal stories are a great area to practice, since they are not the main parts of your campaign.

Personal stories are a great technique to really connect players to the overall game. They are also great techniques for showing the passage of time, and the effects of time on other elements of your campaign world.