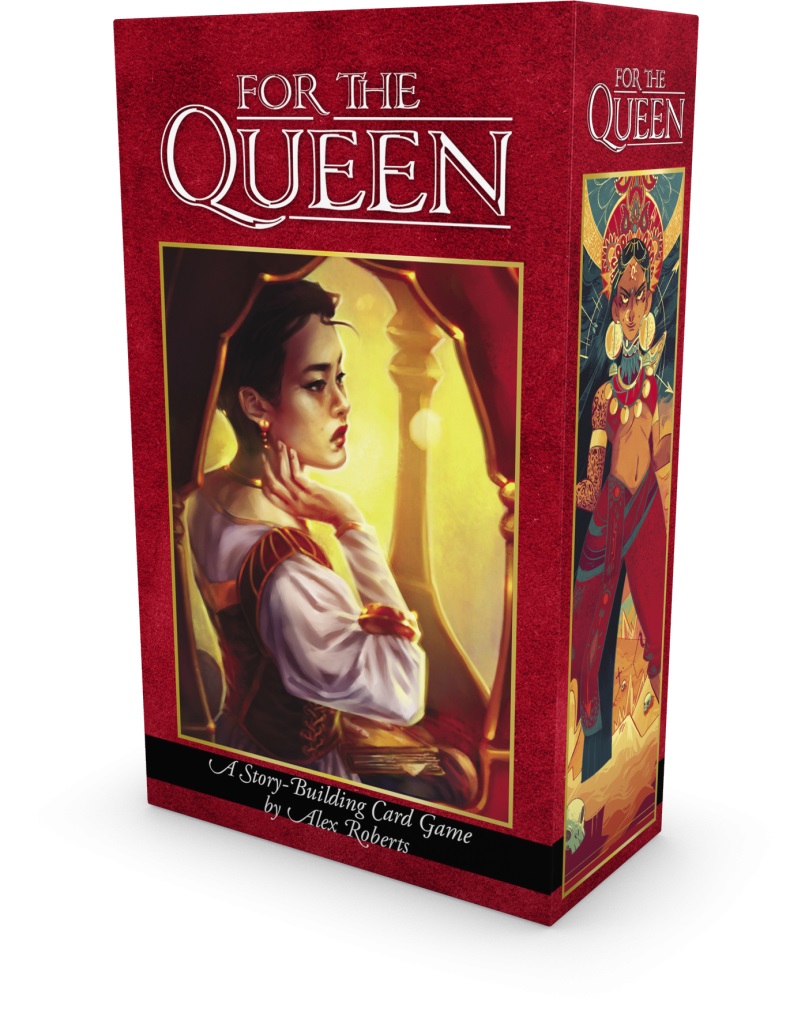 This review is going to be a little bit different, for two reasons. The first is that this is one of those instances where I had the time to playtest a game before writing a review. The second is, much of the content regarding my actual play experience has appeared on other social media, as I was discussing the experience.

Those differences noted, let’s get started.

For the Queen is a roleplaying/story game in card format. This review is based on the physical game. The game is composed of 46 prompt cards, 19 numbered instruction cards, an X-card, and 14 Queen cards, depicting different monarchs.

The card backs are all gorgeous, as is the artwork of the example queens. The art style of the queens varies as much as the actual queen characters do. The prompt and instruction cards have lettering and a parchment background with no artwork on their faces.

Not only does the box feature the art from the queen cards, but the box itself is one of my favorite pieces of game packaging that I have encountered. The cards are tarot card sized, and there is an inner container that holds the cards, with the outer cover slipping over the other half of the packaging. 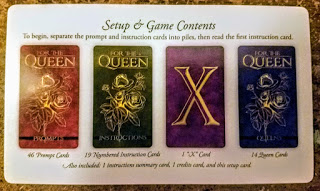 For the Queen is played by drawing prompts and answering the questions on those cards. Other players are allowed to ask follow up questions to add details, but the player answering the prompt can decide not to answer a follow-up question.

The players pick one of the queen images to visualize the queen that they are following. Each player represents a member of the queen’s entourage, and each is in love with the queen, in some way or another.

There is an included X-Card, but its purpose in the game isn’t just to keep the table safe, but to help edit content. While the X-Card included can, and should, be used to remove potentially problematic content, it is also included to allow players to edit cards they don’t think they would enjoy answering, or to edit content that doesn’t feel consistent with the story that is being established.

There is a prompt card that states that the queen is under attack, and asks the players if they will defender her. This is the final prompt of the game, and the game ends once this question is answered. For a longer game, the final card can be placed at the bottom of the deck. For a shorter game, it can be inserted halfway through the deck.

It’s a very simple concept, but the key to the execution of the game is in the prompts, as well as the nuance that the different images of the queens provide in visualizing what the world looks and feels like.

Many of the prompts are phrased in a way that makes you wonder if your love for the queen is a good thing. They ask questions that examine your relationship with the queen, events in your past, and how those events affect the current course of events.

You might find out about harsh decisions that the queen has made in the past, or you may find out about difficult decisions you had to make to get to where you are. These are part of the evolving idea that you have about who your character is, and if they would, indeed, defend the queen at the end of the story.

Because I’m planning on facilitating the game at a local convention soon, I asked my local group if we could play this at our monthly Saturday game gathering. I mention facilitating, because the game does not require a GM. In fact, the rules don’t make a provision for one. The instructions are printed on cards that players take turns reading, which reinforces the concept of decentralizing the task of primary storyteller. That said, I still wanted to have a good grasp of the game before facilitating next week.

As the prompts started to develop, we found out that one of us was her informant, giving up people that dissented against her rule, including their family, one of us was someone continually put in situations to make them look incompetent.

The “disappointment” was a person that she kept putting in bad positions so that she could show how benevolent she was when she publicly forgave them.

Another of our group was a lady in waiting that was considered beautiful on her own, but constantly downplayed her own appearance to not draw the queen’s ire. She was also in awe of the queen and was actually touched by her once.

My prompts led me to a character that was being held as a political hostage from the other nation we were negotiating with. Originally I hated the queen, but the longer she told me about how terrible my homeland was, the more I came to love her. She would have me stand in front of the nobility and apologize for the sins of my countrymen to educate everyone on the superiority of the Queen’s land.

We also found out that the queen ate things that no one should see, that all of the royal butchers were blinded so they couldn’t see what she feasted on, and no one close to her could remember anything from before they were in her inner circle.

The End of the Road

In the end, everyone except my character defended the queen. When she was attacked, I suddenly saw a brief glimmer of hope of returning home, and abandoned the shell that I developed to defend me from the abuse of hearing about how awful I was by association with my people.

It felt like early on, we decided this was a sinister queen, very quickly, asked most of our questions to flesh out our characters and our history with the queen, then moved towards “world-building” questions towards the back half of the game.

When we picked our second queen, we wanted to play against type when it came to the horns. Our first player mentioned a foiled assassination attempt, and ended up being from a family that served as royal bodyguards.

We started a lot more world-building questions upfront. We established that the country was a blasted wasteland where you can hardly see the sky for the crimson haze, and that it has been ruled by a hell-spawned/tiefling dynasty for centuries.

Our next character to take shape was the royal chef, that the queen treated kindly and introduced to nobles at banquets in recognition of his talents. Eventually, we found out that his secret is that he is the bastard sibling of the queen.

I had to determine why I could not forgive the queen, and decided that I was a noble that was potentially betrothed to her, but she ruled in favor of a rival family that had been attempting to ruin my family’s business.

I had a magical broach that I would use to defend her, with the souls of some of the lesser members of the rival family trapped within it. We determined that while the dynasty is traditionally tyrannical and cut-throat, she and her brother have been less so than their forbears.

She wants to make the country a safe and clean place, and to have respect for others. To rule through respect and service instead of fear. Which my character thought was a very quaint trait of hers, but not realistic.

Our last character turned out to be her legitimate brother, and we learned that ascension to the throne is by assassination. He loves his sister, and hated his father, but still regrets that his sister killed their mother as well.

When asked how I reconciled loving the queen, but being unable to forgive her, my character stated that all real marriages are a successful balance of love and resentment, and it is better to go into a marriage knowing what that resentment would be upfront.

From the half-brother, we learned that the queen enjoys dancing when by herself, and we learned that the bodyguard danced with her once, and was shocked that she would do so. We also found out that we have magical weapons of mass destruction that she isn’t willing to deploy.

The End of the Road, Part Two
While the game would be a lot of fun with the general structure and the well-written prompts, the artwork on the queen cards adds a special layer of imagination that helps to start pushing the game in a specific direction.
Share12 [1]
Tweet9 [2]
Reddit1 [3]
Email [4]

When it came time to answer if we would defend her, the bodyguard and her legitimate brother did not. The brother is afraid she is too much of a dreamer to keep the nation intact, and the bodyguard wanted to back a strong family member.

The illegitimate brother/royal chef cared about her too much for all of her kindness, and I wanted to prove to her that I was a better match for her than she thought by devastating her enemies with my amulet of enemy souls.

This was the opposite of the previous round of prompts because we fleshed out a lot about the kingdom and the dynasty before we went too deep into most of our characters, and we didn’t discuss much about the trip, just lives at court, and then the attack on the road.

I am really glad we had the opportunity to play more than once, because I wanted to see how the second playthrough differed from the first. I am excited to play this game again. The prompts are very strong, and I love the different images of the queen and the structure that conjecturing about them provides.

This game is gorgeous, and it feels good to hold the box and use the cards. The prompts are a lot of fun, and are good not just for the information that they ask for, but because they lead you to want to ask follow up questions. While the game would be a lot of fun with the general structure and the well-written prompts, the artwork on the queen cards adds a special layer of imagination that helps to start pushing the game in a specific direction.

There isn’t much that I can complain about this game. The worst thing I can think of is that the game makes me want more. I want more prompts for when I’ve played the game a few more times. I want more queens to prod the imagination. I did end up with cards that came up for me more than once across the two games, and while they can be X-carded or passed on to other players, it’s slightly less exciting to get that same card again. Overall, this is a pretty minor quibble.

I had a lot of fun with this game. The only thing that could make me state my recommendation more strongly would be if the game wasn’t predicated quite as much on improvisation. While there are very strong, directed prompts, the game gets good when people have a good set of follow up questions that emerge from the answers of the other players.

If you have any love of improvisational prompts, or you just want to see a gorgeous set of cards and want to read a lot of well-written content, you really should pick up this game.