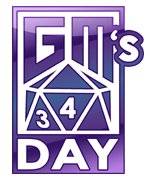 Happy GM’s Day! This most excellent holiday rolls around every year on March fourth, hence the slogan “March Fo(u)rth for GM’s Day,” and I believe this will be the 10th anniversary of GM’s Day. (You can read about the history on GM’s Day on EN World.)

In keeping with 2012’s “more meat, less meta” approach here on the Stew, we’re going to share some of our favorite cross-game-applicable (IE, not necessarily system-neutral, but usable with more than one game) resources. Resources, in this case, means one of three things: a product, a technology), or a link to something online.

We’re excluding Gnome Stew’s own GMing books from this list, but if you’d like to check out Eureka (501 adventure plots) and Masks (1,000 NPCs), both system-neutral, we’re currently running a GM’s Day sale through the end of the day on Tuesday. Head over to the Engine Publishing online store and use the coupon code “gmsday2012” (no quotes) at checkout to get 10% off. Note that our bundles featuring both books are always 20% off, so this discount will take another 10% off those.

Battles of the Medieval World: From Hastings to Constantinople
Yeah, it’s a coffee table book. But I’m not a military historian, so this works for me. When I’m presented with detailed maps and descriptions of 20 different battles of the middle ages period, including sidebars on advances in arms and armaments for each one, I have a ready reference for all my fantasy battles. Plus, it’s beautifully illustrated. If I need a picture of an NPC or a battle scene, I can just open it up and show the players what’s happening. Plus, the articles detail the reasons why these battles took place, the political disputes unique to the period. That’s also useful material. I can rip these events from history, change a few proper nouns and I’ve got a ready-made dispute I can drop the PCs into. (Troy)

d20 Modern Critical Locations
I tend to run rules-light games, but there are times when I could use a quick floorplan. This product has this in spades for modern settings. As icing on the cake, there are little tidbits about running games in each location. Sure, it’s sometimes d20-specific, but as d20 is the lingua franca of RPGs it’s fairly easy for me to convert to other systems. (Walt)

GURPS Warehouse 23
Pound for pound, this is one of the coolest, most inspiring, and most entertaining gaming books I own. Its premise is simple: Warehouse 23, a staple of conspiracy lore (and Indiana Jones and the Raiders of the Lost Ark) is real, and it’s full of weird-ass shit. It includes different versions of the warehouse, different ways you can integrate it into your game, and tons of weird occult, super-science, and other stuff that’s stored in the warehouse — most of it game-changing in some way. I can’t fail to get inspired when I read this book.

GURPS Worldbooks
Yes, I’m cheating here and pointing to a game line rather than a single product, but the fact is that the GURPS worldbooks sit together on my shelf like an encyclopedia and I often find myself reaching for them when campaign-building. They’re excellent resources for mixing and matching when creating new settings, cultures, and threats. (Walt)

Kingdoms of Kalamar Villain Design Handbook
The first 75 pages of this 175-page work is devoted to designing effective, compelling and highly motivated villains, but in a way that works for any roleplaying game. (The d20 mechanics of feats, spells and sinister magic items are in the second part of the book.) It examines stereotypes for NPC villains, how to exploit them and when to alter or flip them. It goes into detail, examining six archetypes of villains, looking at their motivations and goals, and giving advice on how to plot out their schemes in an adventure format. And it details several cool villainous lairs and strongholds. It looks at villain organizations and how to construct intrigue scenarios. And you know how we gnomes love our indexes: this one has 12 pages of fairly detailed entries. Now, when I design adversaries and plot their mad schemes, I always refer to this book and Masks in tandem. (Troy)

100 Ways to Create Fantasy Figures
A GM can’t live by game mechanics alone. He needs inspiration. Although this is an instructional book for artists, it’s also an impressive gallery of the work of Francis Tsai, who has produced artwork for Magic: The Gathering cards and Dungeons and Dragons products. He’s far from being the only artist I go do when I’m hoping to jump start my imagination and create a gaming scenario, but this book was affordable on the second-hand market, and it features so many visual touchstones important to the fantasy genre. Vivid imagery is important to my game prep, and I’ve found I go back to this one time and time again. (Troy)

Open Game Table, Vol. 2
One of a handful of resources that have a permanent place on my “inspiration shelf” OGT2 has a bunch of articles of all types from different ways to run your game to NPCs and plots. A flip through always gives me something to work with. (And it doesn’t hurt that it features several articles by gnomes…) (Matt)

Star Trek Narrator’s Guide (Decipher, 2002)
This is the best GMing advice book I’ve ever read. Set aside the Star Trek-specific stuff and you have a toolkit for any episodic game, as well as some tools that can be used even in non-episodic games. It’s concise, well-written, and clearly designed to be used. There’s no fluffy bullshit or spouting off, just practical tips, templates for things like adventure design using the three-act model, insight into what makes a game Star Trek-y (and by extension, how to make other games [Game X]-y), and much more. This is OOP and, unfortunately, the hardest of the Decipher Trek line to find these days; if you see a copy, snap it up. (Martin)

Behind the Name
A good GM always needs names. It gets boring and predictable after a while calling NPC’s SG (for Some Guy). This website has a wide variety of names from dozens of languages suitable for any gaming genre, including ancient, medieval, and mythological names. It also goes into the meaning and history of the names, which can be invaluable for inspiration. (Bob)

Cracked.com
How many times have I linked a cracked.com article as a source in an article I’ve written? A butt-ton. That’s how many. And for good reason too: both funny and informative, Cracked always has something for your game if you poke around a bit. (Matt)

deviantART
A picture is worth a thousand words. Sometimes when a GM is stuck for inspiration, just browsing through photos, drawings, or computer graphics can lead to that sudden spark. Deviant Art is full of images in dozens of categories and mediums, and is well worth a look. (Bob)

Google Maps
When I wanted an accurate location near New Orleans, but without all the population, Google Maps gave me Bridge City, an industrial area just south of the river. When the players wanted to drive straight through from their base in Excelsior, West Virginia to a ghoul infestation near Miami, Florida, Google Maps told me it would take about 18 hours. (Telas)

Hexographer
Every GM needs a map at one time or another, and Hexographer is a wonderful tool that can create old school terrain maps, towns and cities, and even star maps for your space opera game. The free version runs from the website and has most of the features of the paid version, which installs locally so you don’t need to be connected to the internet. (Bob)

Obsidian Portal
Having used OP to run an 18-month Star Trek campaign, I can safely say that I wouldn’t have been able to run that game — the best I’ve ever run — nearly as well without this tool. Wikis are great for campaign organization, but OP adds another layer by giving you and your players access to the same resources while enabling you to preserve sections of each page as GM-only. So we could all see the PCs and major NPCs, but only I could see the NPCs’ plots and plans. It’s a tremendous resource. (Martin)

Wikipedia
I’m running a game set in the early 1980s. Want to know real-world information, like when the M16A2 was introduced, or who the director of the CDC was in 1981? Want a vampire who is mythologically accurate, but different from the norm? Wikipedia has it for you. (Telas)

Monkey Pirate Tiddly Wiki
Easy to use with plenty of functionality and extra organizational tools over your standard wiki, I usually keep some form of my campaign notes in a MPTW. (Matt)

My laptop (soon to be superseded by “my tablet”)
No single product has changed the way I game than my laptop, especially with the advent of wireless networking, online hypertext rules, and pdfs. Whereas I once needed boxes of stuff when running a game away from home, all of my rules texts, adventures, and notes are now stored in my laptop. It’s also enabled me to include more music, sound effects, and visual presentations. (Walt)

My smartphone
It doesn’t replace a laptop or a computer (yet), but it does have the advantage of being with me all the time. (Well, nearly all the time; those mid-shower inspirations still have to wait.) I can take down notes, look up information, access (and modify) the campaign website, roll dice, and even text message a player mid-game.

What are some of your favorite cross-game-applicable GMing resources? Let us know in the comments — and happy GM’s Day!