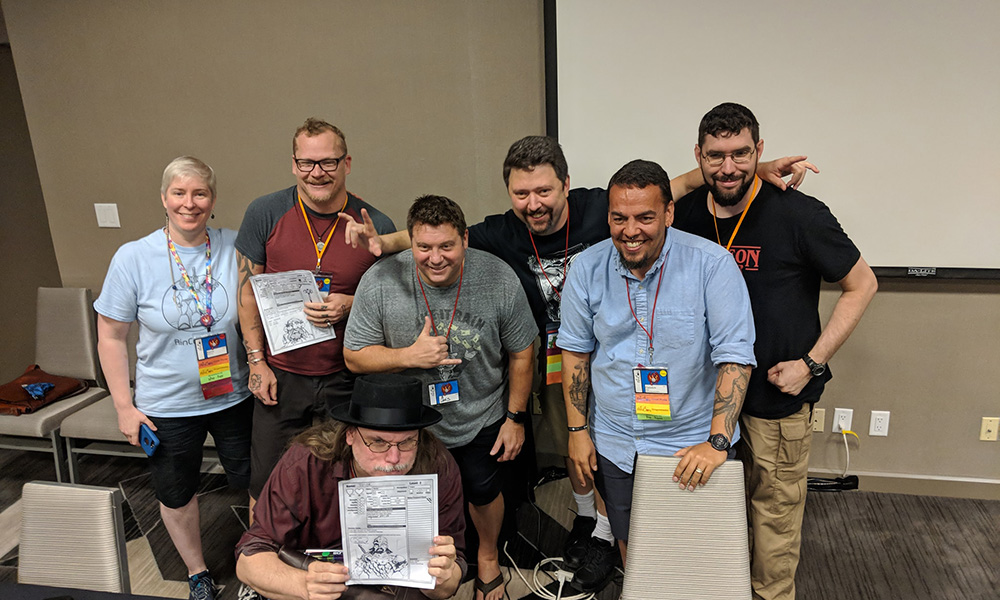 There are a lot of reasons why I go to gaming conventions. I get to meet new people, try new games, and see old friends. One truth that remains constant throughout the varied cons I’ve been to over the years: they succeed or fail based on the GMs and players that they attract.

Great GMs give players an excellent experience, which brings them back to the con next year. Great players that come back build a strong culture of excellent gaming. When those positive GM/player interactions happen, it lifts everyone up and creates spaces that grow and thrive.

I’m going to do my best to prepare you for the special challenges that a convention experience holds by sharing my top five strategies for success.

Convention games demand a certain level of rules mastery. I learn the game system so that I can focus on the people at the table instead of the rules. I don’t need to have every rule and exception memorized but I should have a full understanding of the game I’m running.

In a convention setting, I know that I will need to make quick decisions when questions come up and I don’t have time to look up the rule. It doesn’t need to be a perfect call but it should be in line with the spirit of the game and the story.

I am excited to celebrate every type of player that may show up to play a game that I am facilitating. I have to be prepared to guide players with no experience, make sure that players with an encyclopedic knowledge of the minutia have fun but don’t take over the game, and encourage those players that live in the middle.

#2 Be an advocate for the players

Without the players, I would live a lonely life at an empty table. I certainly have plenty of horror stories about difficult players but the reality is that they are the minority of people I share a gaming table with. Almost everyone that I meet at conventions are wonderful, giving, and fun people.

I take my job as a game facilitator very seriously. I am there to create a safe space, make sure that players respect each other and the rules, and help tell a cool story. I help set the social contract for the group by starting each session with a talk about my boundaries and expectations for the game. Clear communication makes it easier to understand what the table needs from me.

I make sure that everyone at the table understands that I will enforce the use of the X-Card by moving the story in a different direction when it is used. I warn and/or remove anyone that doesn’t respect, or demands an explanation of why, someone has used it.

While we all contribute to creating a safe environment I recognize that I have taken on an extra level of responsibility to do my best to advocate for anyone that needs it.

If a player is trying to take agency and control away from another person then it’s my job to talk to the offender and give them the opportunity to either adjust their actions or leave the game. If someone is being rude or exclusionary the need for those conversations becomes immediate and serious. It’s important to me that I say, “We don’t do that here. I need you to stop or we can try to find you another game.”

Many conventions have staff members and clear procedures in place to help GMs deal with any problematic players that won’t respect the convention’s code of conduct. Make sure you familiarize yourself with what safety procedures and policies the con you’re at has.

I’m not just there to stop negative behavior. It’s even more important that I highlight the players and their strengths so they get a chance to shine. I endeavor to provide each of them a task that is especially suited to their character. Take the time to ask each person, “What do you want to do,” or “Describe what happens when you punch the cyborg ape!”

I work to help them tell a great story and create memories by encouraging the players to support each other. I support this group of strangers as they build friendships and create community by keeping the space inclusive and welcoming. I share their love of gaming and give them the encouragement they need to be amazing.

#3 Be an advocate for the story

Tabletop RPGs are, at their best, an opportunity for collaborative storytelling. This is not tied to any one particular game system. Even if I’m running a module, I can give the story room to breathe, grow, and feel personal to the players by letting them explore, interact with the world, and having the world react to their choices.

If someone at my table wants to talk to the bouncer at Club Red Herring in the game I’m going to let them. If I didn’t want characters to interact with him I shouldn’t have described him. I’m going to follow along as they run down the wrong road and adjust the road so it leads where they need to be. Maybe I had a major confrontation planned for a power plant on the outskirts of the city but there is no reason that I can’t move it to the basement of the club. I make a slight adjustment that better serves the story that we’re telling.

Convention games are a one-time experience so I want them to play pretend and have a joyful time. Â In your home game the life and death of your character matters because you’re coming back next week and you don’t want to start over. Players at a convention don’t need to worry about long term repercussions of their choices so they can be as reckless and heroic as they want.

The stories we tell aren’t mine alone. They belong to the table and to our shared experience. I expect a con game to go off the rails and for everyone to have fun. That’s why we’re all there and that is what the story if supposed to be, fun. If my desire to control the narrative keeps the players from having a voice then I have failed them.

Keep track of the clock. I mean it. Don’t make me type this in all caps. Manage your time.

In a four-hour convention game I will have about three hours and 15 minutes of actual gaming if I’m lucky. Those 45 minutes are filled with bathroom breaks, late players, introductions, chatting, and cleanup after we are done. I’m left with around three hours to answer questions, tell a complete story, and build friendships. That time goes quickly if I’m not focusing on the clock. The converse happens too, where I’m speeding through content and discover that I’ve still got over an hour left despite being at the end of what I had planned.

I would rather end early than run over the time I have. I watch the clock constantly but I still make mistakes sometimes. It happens and I deal with it as best I can. I will remove portions of the adventure that aren’t crucial to the overall story to save time. I cut whatever is necessary to make sure to end on an epic moment.

If things are going too fast I’ll add in another piece to the adventure on the fly. I won’t add content that ends up feeling like a chore to the players just to make the game longer. If I add something I want it to be fun

Those final moments of the game are what the players will remember about their experience with me. I try to leave them with the triumph, tragedy, or conflict of that final scene and not a disappointing moment.

#5 Be the leader your table needs

The gaming table doesn’t belong to me. It is a shared space that I have agreed to guide while we tell a story together. When does this space need me to step up and take a leadership role? When the players don’t know how to move the story forward. When someone needs me to step in and enforce an agreed upon boundary. When conflict threatens to disrupt or derail the table. What do I do the rest of the time? I get the hell out of their way.

Because of the time constraints of a convention game, the story can’t afford to bog down and stall. When that happens I step in and offer suggestions about what options are currently available to the players. If they are arguing about what to do next I will call for a vote from the players and then move forward in the direction that the majority has chosen. I’m there to support them not control them.

It’s my job to be kind, attentive, and fair to everyone at the table. I set the expectations of conduct, tolerance, and kindness with my words and actions. I want to be a leader not a dictator.