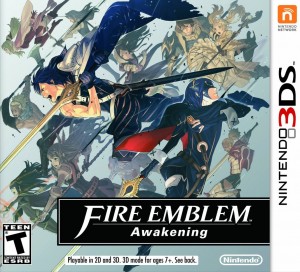 Sweet googly moogly, this game. THIS GAME, YOU GUYS.

I will now attempt to write coherently for the rest of this article. This article will also contain spoilers, most likely, so use caution if you haven’t played.

Let me begin by saying I was really late to the party acquiring a 3DS. The original 3DS’s 3D wreaked havoc on my poor bespectacled eyes whereas the New Nintendo 3DS has so far been rather merciful. But because I only just picked up a 3DS in February, it means I have a lot of games to play.

They will keep waiting because I am thoroughly entranced by Fire Emblem: Awakening. I have been playing this game for roughly THREE MONTHS now. Ready to fight Grima, but I have that reluctance-to-end-the-game-because-I-wanna-keep-enjoying-that-first-playthrough feeling combined with a mighty need to mate characters through support, acquire more stuff like a little magpie, and beat the snot out of as many SpotPass teams as possible.

This game is addictive, and there is so much you can do. Meeting other Fire Emblem avatars and challenging their teams with SpotPass alone will occupy your time endlessly, and that is probably one of my favorite things about this game. Some players are extremely helpful and will load down their team with useful items (stat-boosting items, etc) you can buy provided you have the coin to do so. It’s relatively easy to farm gold with weaker enemies that appear on the map when you have units with high Luck stat, the Armsthrift skill (reduces wear on your weapons to get more use) and a Leif’s Blade (defeated enemies may drop gold). Sending your team out into battle and besting a much stronger opponent is rewarding as heck, plus you get to recruit other players’ avatars when you win. Thus, your team gets stronger. Or, if you have the gold but not the skill, you can just hire them as a sell-sword if you can meet their recruitment fee.

Getting support between units, obviously, is incredibly important if you want to succeed in battle, as units will be more likely to lend a helping hand if they’re nearby. More importantly, pay attention to how you marry characters off to each other because they make powerful future babies that travel back in time to fight alongside their parents if you do your matchmaking thing well. Female characters in the game who produce offspring include Avatar (if female), Sumia, Lissa, Maribelle, Cordelia, Sully, Olivia, Tharja, Cherche, Nowi, Miriel, and Panne. While playing this game, I did not use any guides to produce the “best” possible offspring. I wasn’t thinking about which classes the babies would have based on their fathers. I wasn’t thinking about passing on Galeforce to every possible child. I just matched people up based on how it amused me.

For example, I had no idea that pairing Olivia with Kellam was a fairly decent match. I just did it because he is always trying to be noticed even though he wears big shiny armor, and she always gets noticed and is embarrassed about it. But apparently, Kellam makes a great father for Inigo. I hear that Chrom is very popular with Olivia as well. I’ll probably attempt that next playthrough.

Similarly, I put Donnel with Nowi because my thought process went like this, “Well…he is a monster on the battlefield, and she literally is a monster. Perfect couple.”

I really enjoyed the support between Cherche and Gregor. Apparently, Gregor saved Cherche’s wyvern, Minerva, when it was a baby! Storywise, I felt really good about setting that pair up. Freaking adorable.

I feel bad for what I did to Brady though because I didn’t like Maribelle, and when I got all of the other children, her only option left was Frederick. Their support conversation was boring as heck.

Kind of disappointed that I wasn’t able to match Tharja with my female Avatar for the lulz. I also would have liked to ship Virion/Libra just for their support conversations. In all seriousness though, I would like to see same-sex pairings in Fire Emblem. I have been waiting, since Lucius/Raven in Fire Emblem, to make gay and lesbian Fire Emblem marriages. The next Fire Emblem game in 2016, Fire Emblem Fates, will offer same-sex and opposite-sex matrimony…so it looks like my wish (and many others’ wishes) will come true.

I haven’t checked out any of the DLC stuff, but I like a lot of the neat extras you can do. Really like other characters from different Fire Emblem games? You can go to the Bonus Box and find some of your favorites. As soon as I was able, I snatched up Hector. Hector’s the man. I also like all of the extra Paralogue chapters that unlock just before Grima so you can pick up characters who have returned from the grave (Say’ri’s brother, Walhart… freaking Emmeryn, for goodness sake).

I think my only real gripe is that THIEVES CANNOT STEAL. What do you mean, thieves cannot steal? THEY ARE THIEVES. WAT.

Oh, and I guess I am not a fan of Lunatic mode. My regular game is on Hard mode, Classic. Hard/Classic is…it’s pretty hard until you really hit your stride, and even then, if someone dies you’re just like “WELL, SCREW THIS I NEED TO START THE CHAPTER OVER.” My friends have seen the rage build up and release when a fight goes sour. But Lunatic mode…I started a new file just to see how Lunatic mode would feel, and I didn’t like how it felt. It feels like agony, even in Casual. Why would anyone do this to themselves, just why. It is absolutely brutal and just ceases to be fun anymore. I mean… Am I missing something here? If I keep playing it, will something eventually click into place to make it, I dunno, tolerable? Maybe it just sucks for me because I refuse to use Frederick. There has to be a way to carry my team until they get stronger without relying on Frederick. Curse my pride, maybe I should just suck it up and use Frederick for a while. Or maybe I should beat Chrom and team with sticks and transform their weak bodies into warriors. Ahhh.

I’m going to be playing this game until the end of forever… or at least until the new one comes out. Absolutely rock solid game.