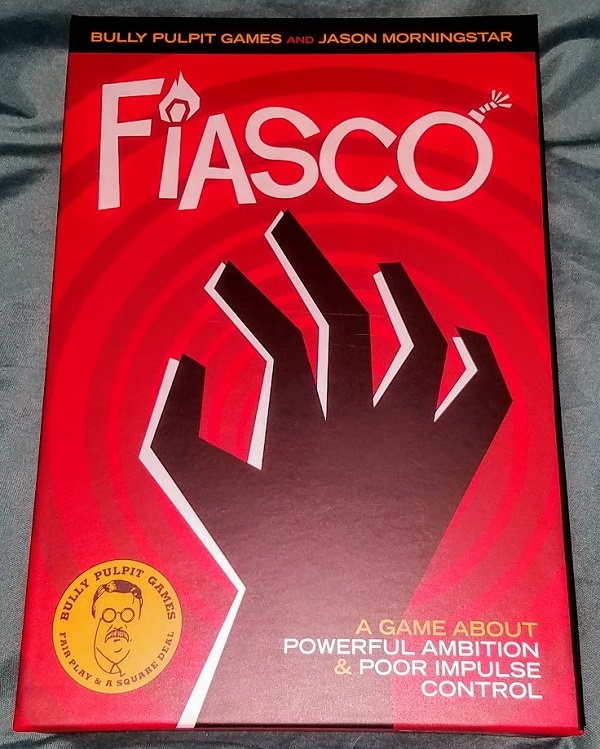 A few years ago, I heard about a really interesting game. It was a self-contained, single-session game about telling disastrous stories. I had a great time reading through the rulebooks, and I picked up multiple playsets and the companion for the game. But when it came to actually gathering a group for what should be a simple one-shot, I ran into issues.

The game I’m talking about is Fiasco. It’s a game about playing through stories where the characters have grand plans, which usually end in ruin. In many cases, it’s heavily influenced by Coen brothers films like Fargo. I’ve seen it used to tell some great, over the top stories, that self-destructed gloriously at the end. But I’ve also seen the game played publicly at conventions, where some of the tables nearby cringed a bit at some of the content.

What’s In the Box?

That brings us to the new edition of Fiasco, a completely card-based iteration of the game. The new version of the game doesn’t rely on dice, and comes in a fully portable box, with additional playsets now included as distinct decks.

The box includes a board to hold the positive and negative outcome cards, the aftermath cards, and the “Let’s Not” card. There is also a booklet of rules and four decks, one of which is the “engine” deck, the main cards for resolving any scenario used. 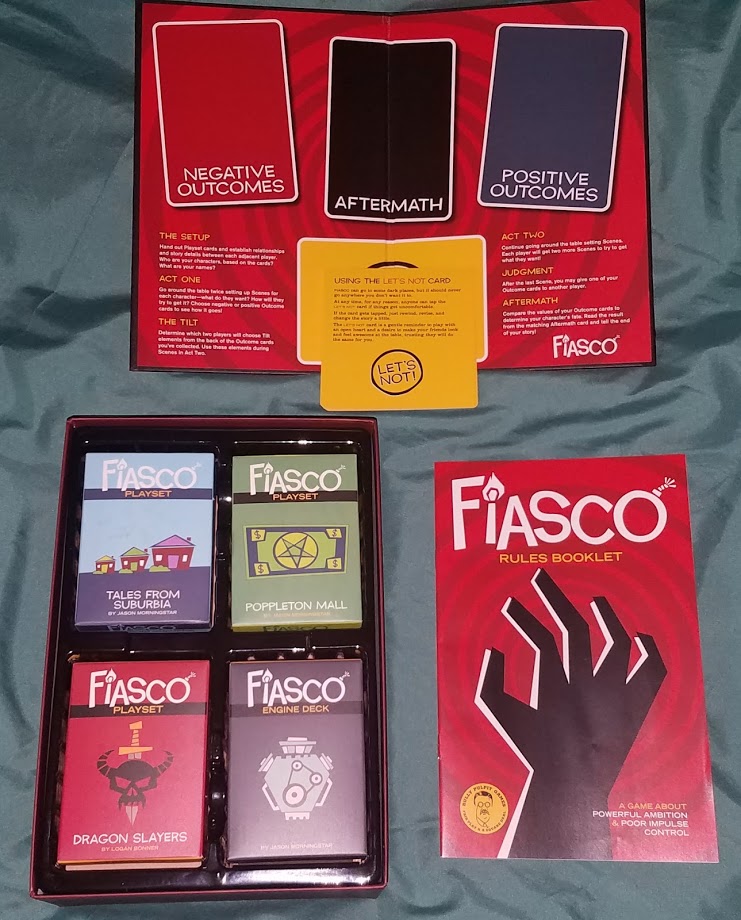 The previous version of Fiasco involved having two different color dice, rolling on the playset charts, and totaling different color dice to determine the Tilt phase and the Aftermath phase. This new version only uses cards as a randomizer, with the decks serving as the means of distributing results.

In brief, the game is played in two acts, plus the Aftermath. Players assign relationship cards between one another. Two players receive cards with needs on them, another receives a location, and others receive objects. Players choose to either establish a scene, or resolve a scene. The person resolving the scene determines if it’s a positive end or a negative end, and players attempt to work in the items handed out at the beginning of the game.

After playing through the first act, characters total their positive and negative cards, and look up the “tilt” option, which introduces a change in the status quo that needs to be worked into the narrative. After the second act is played, each player can hand either a negative or positive card to another player, and explain how they helped or hindered the person that receives the card.

When the cards have all been handed out, characters look at their totals, and reference the Aftermath cards with the appropriate total on them. The closer to zero characters are, the more characters hold on to their status quo. The further away from zero, either positive or negative, the more dramatically fortunes shift.

One addition to the game is the “Let’s Not” card. This is a safety feature that allows players to veto content that has been introduced into the game. When Fiasco was first introduced, safety tools weren’t developed in the way they are now, and given the content in Fiasco, this is a welcome addition.

Not only can narrative about desperate people go to desperate places, which might push into territory that players may not wish to explore, but some of the needs can be potentially problematic for some players. For example, some needs are a drive for sexual activity, which some players may not be comfortable with at the table.

The rules booklet even includes examples where various players use the “Let’s Not” card to veto a topic that comes up in the game. I appreciate this, because it doesn’t just introduce the safety mechanism and then not model how it would be used in the game.

I Kickstarted this edition of the game, so I picked up all of the decks that I could, but the default game box comes with the following decks:

The Engine deck is used for each game of Fiasco, as it has the standard positive, negative, and Aftermath cards. The relationships, needs, locations, and items are derived from the playset decks.

An additional bit of functionality that the decks provide is that you can add decks together to create a broader range of options. If you want to cross genres, you can mix wildly different decks together, but if you have decks with a similar theme, this can allow for a lot more replayability.

The box itself is nice. It has a plastic insert that has four sections in it. In the core box, there are cardboard inserts that can hold one of the tuckboxes in each section of the box. There is also room on top of the box for the board and the rules booklet.

Having loaded up on decks, I’ve got a little more insight into how the box works for storage. Without the cardboard inserts, the four quarters of the box can hold two tuckboxes each, but it gets a little difficult to pull out the bottom tuckbox. If you take the cards out of the tuckboxes, you can fit three decks in each quarter.

Windfall
This is a great one-shot game, that has honed its ability to be used on the fly.

I think the card-based format of Fiasco makes the game much more approachable, especially as a one-shot game. The setup is much faster without referencing the various dice charts, and something about counting up cards feels less cumbersome than reading the dice results.

Beyond transitioning the resolution of various charts and dice totals to cards, the introduction of a built-in safety mechanism, as well as examples of how it would be used in play, is a very welcome addition to the game.

The card-based format also makes it so much easier to customize playsets for “supercuts” of different genres.

It’s a relatively minor quibble, but I wish the box were designed a bit differently. While you can create makeshift personal “Let’s Not” cards, I wish the game had individual cards for players, instead of putting one on the playboard.

This is a great one-shot game, that has honed its ability to be used on the fly. It’s a great example of a new edition of the game not changing the core concept, but finding a better means of resolving the same features. While some people may have a harder time coming up with scene ideas on the fly, there are also enough prompts in the game to help with that issue.

Do you have any Fiasco stories from games you have played in the past? Can you recount them in PG-13 form? What other games do you like that are framed “wider” than the traditional RPG, determining the ending but not the steps in between? Let us know in the comments below!