I never thought I’d ever see “Bob’s Burgers” and jiangshi ever be referenced in the same document, but life has a way of throwing surprises at you. Jiangshi: Blood in the Banquet Hall is a new game up for Kickstarting (follow the link here) until August 14th and it promises to fulfill your diner management fantasies, all while addressing poignant themes such as racism and cultural assimilation through zombification. It feels like a weighty promise, and believe me it is, but it does well to explore this through the document to the best of its ability.

Note: due to the current epidemic, I’ve been unable to playtest this game on the table. What insights I may have might not translate to actual gameplay.
Note+: I will be referring to two elements in this similarly: ‘jiangshi’ in reference to the hopping vampires, and “Jiangshi” for the game itself. 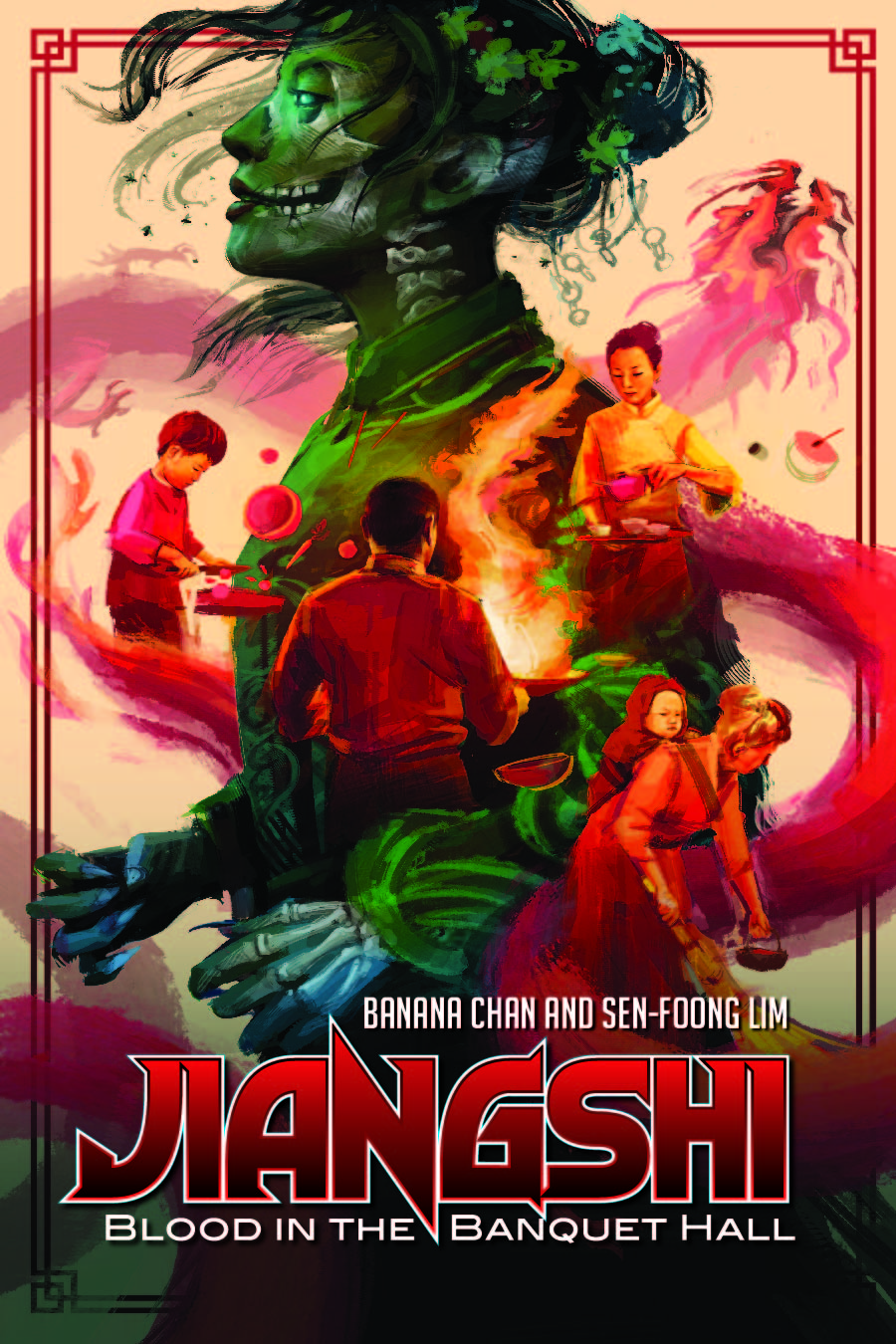 The thing to notice with Jiangshi is the gorgeous cover art (done by the talented Kwanchai Moriya), individual set-pieces (by Steven Wu) and the detailed graphic design (this time by Matthias Bonnici). Immediately, before you even read a single word, you are impressed upon everything the game is about. While yes, one of the central antagonists is racism itself, the game is ultimately about family and the bonds between generations. The jiangshi in the center (whom of which I feel resembles the mother on the right), however, also shows the important elements of life and death central to the game’s conflicts.

Personally, I find it very fitting for the family business to be centered around a restaurant. Restaurants are social melting pots where people from all over gather in a single locale. This attracts the poor and the rich, the young and the old, the proper and the delinquent, as well as folks from many ethnic groups. Furthermore, I also find [food] to be such a central focus of life. It sustains us and binds our memories to the scents and flavors, and is deeply tied to love and community. Food is about life and jiangshi, even in unlife, desire to feed to fill that aching lack of life within them.

One thing that personally gets me going with this game is the fact it requires a whole box set. It blends tabletop roleplaying with board-game mechanics beautifully well. The last time I could think of a game that involved this much movement of pieces and cards was Phoenix Dawn Command and that thing was a work of art. It might seem a bit shallow of a reason, but I have high hopes for any game that tries to blend the two major elements of analog-nerdom. Physical pieces of a game on a table deliver weight and import simply because they’re on the table, begging to be paid attention to.

This is a game about a Chinese family making their living by running a restaurant in America’s Chinatowns, circa 1920. Despite societal backlash and anti-Chinese laws, they have turned a profit and their quality of life has recently improved.

Night, however, brings a new terror.

Players take on the roles of members of the Chinese family (mostly from Guangdong province), spanning three generations, who face threats of jiangshi (vampires) at night and racism by day. This is primarily a game about storytelling. Combat is limited, but horror and drama are the primary vehicles for driving the game forward. 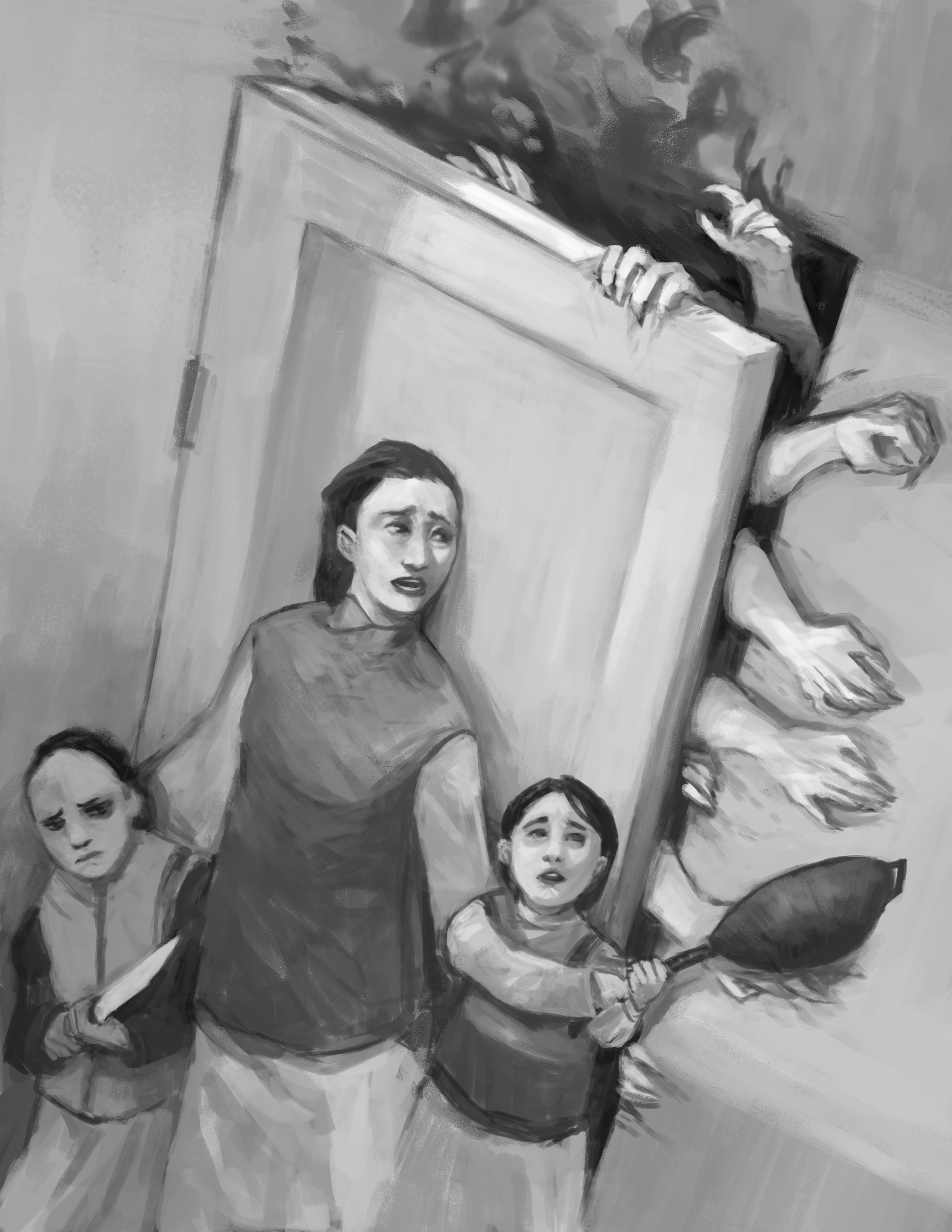 The overview, at least in the version of the game I have access to, is evocative. Immediately you come to understand just who you are, what you’re faced with, and an idea on how the game should be played. Few games really capture this in their opening lines, often leaving the interpretation and themes to the GM (game moderator in Jiangshi). With games aiming to evoke specific tones and topics, the overview itself provides a touchstone to draw back to.

Outlined explicitly near the beginning of the book is a Safety section. It holds not just one tool of safety but THREE. This is especially important considering the fact the subject matter (you know, the whole racism theme), but most games barely have one. Hell, most games with these kinds of safety tools still end up placing them all near the back of the book like some sort of add-on. Jiangshi jumps to saying “hey these are extremely important so they’re going in front and center!” and this needs to be talked about more. This is great where it is because within the next couple pages is the sweat-dripping “How to be racist” section.

To all those getting nervous about that, don’t.

It’s really easy to try to forget racism exists (especially if it doesn’t typically apply to you) but a central theme is about handling and exploring the sort of situations Chinese-Americans had to go through. It’s a very authentic place to be and, even though it makes some folks uncomfortable, it’s an important part of early 20th-Century culture that gets glossed over.

Jiangshi then goes through (at the time of reading) more than 15-pages of raw historical and cultural settings and timepieces. Even if you’re neither a history buff nor knowledgeable on Chinese culture the section does a lot to really ingrain the backdrop into you. As interesting as the actual mechanics are, if you skip by the setting details – much like I do so for most TRPGs I pick up – you’ll be missing a lot of key and important details to make your own game authentic and weighty. 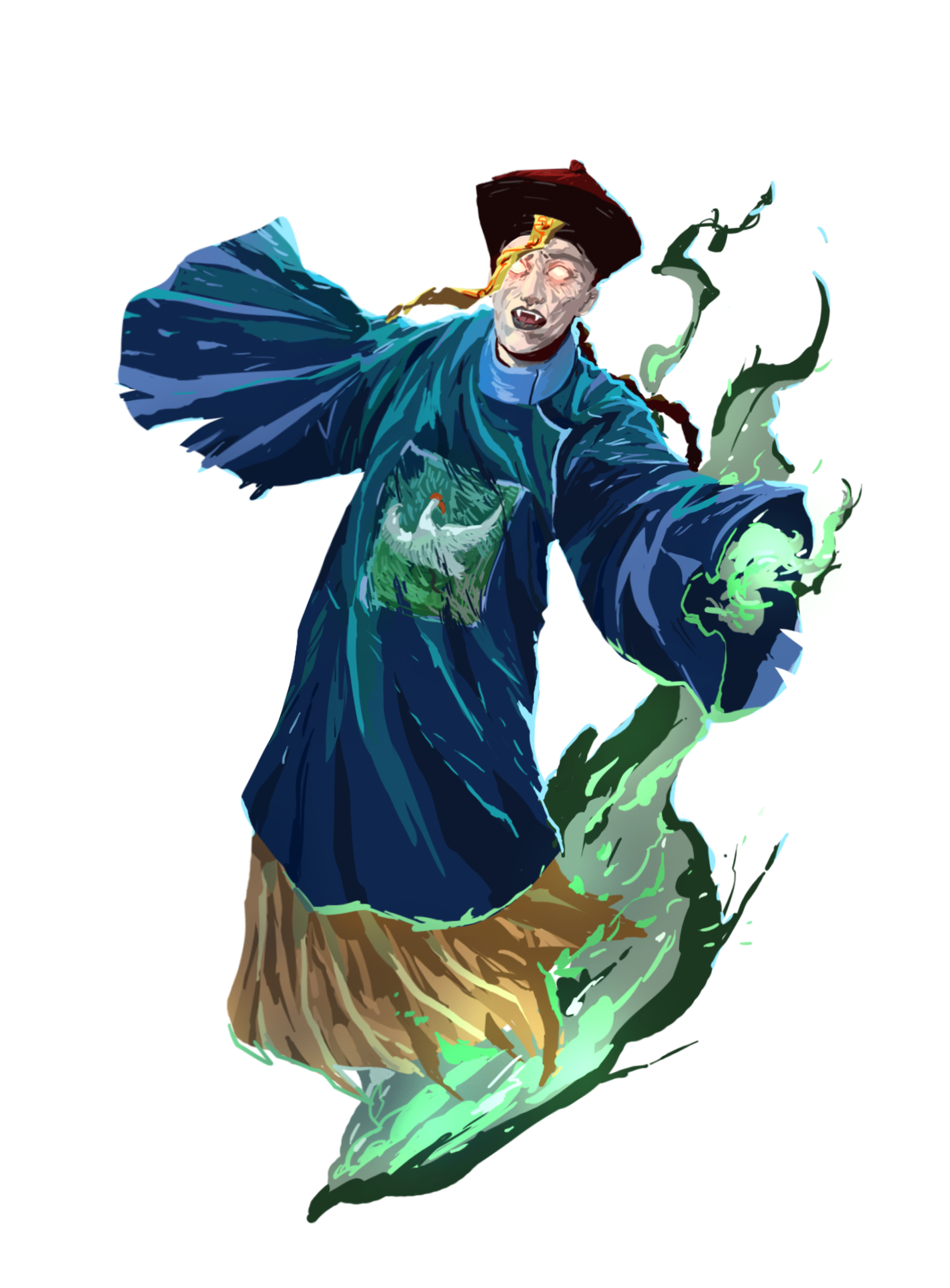 Jiangshi does something I’ve never really ever seen before: it includes cultural superstitions and influence into the dice. In both Chinese and Japanese, the character for the number 4 is extremely similar to the one for death. This has lead to the association with 4 being a particularly unlucky number. Dice in Jiangshi focus on two different pools: a family pool (6d8) players roll to make checks, as well as an individual pool (2d8) you role when attempting to assist others.

Here’s the kicker: for every 4 you get in the roll, it neutralizes the highest number in the pool.

I can honestly say that I’ve never seen such a smooth and natural incorporation of cultural superstition into an active dice mechanic… well, ever. If I’m wrong, please feel free to leave a comment where I can find such. I’m not really counting ‘lucky number 7’ for craps because it’s not a conflict resolution mechanic for a tabletop (just to be clear).

You initially start with a 6d8 for your family pool. This decreases by 1 for every day (of 5-days) of the session or adventure. This represents the wear of the jiangshi eating at your family’s spirit. Another thing I’m in love with however, is the fact that the individual dice of 2d8 never really decreases. In fact, it increases on failures, gaining an additional 1 whenever you fail. While the family pool might decrease, the extra effort you as an individual put forth to help your family never does. This exquisitely emphasizes the importance of your familial bonds in trying times. The world is difficult but together, as a family, you can do this.

The dice mechanics both incorporate cultural superstitions, as well as stress the importance of family, all from just playing the game and rolling dice.

I’m excited for Jiangshi: Blood in the Banquet Hall.

As an Asian POC myself, seeing this kind of representation – despite only being a quarter Chinese (the rest being Filipino) – gives me a lot of hope for more successful games like this. Through the years I’ve been playing and GMing I’ve regularly come upon Chinese influenced games often written by non-Chinese creators. I’m not saying there’s anything particularly wrong with writing about something you love, but there’s always been this sort of… observatory feel to it. It feels like the mysticism and martial arts always get played up and there’s little cultural backing outside of stereotypes I might see on television (or I suppose web) shows.

Jiangshi was the first time I really felt that the cultural backing of the game was really uplifted and treated authentically. The themes are strong and really play to the struggles many Chinese-Americans (as well as Canadians) face. Struggles of racism, assimilation into western society, the loss of identity wonderfully paralleled through the zombification… There’s even a whole section emphasizing choosing proper Chinese family names, a Chinese generational and given name (of which Jiangshi also includes non-binary names somehow), but then the character sheet has a part specifically about your English name and that just… kinda hurts to think about.

There’s something really special here and anyone would regret missing out on this game.