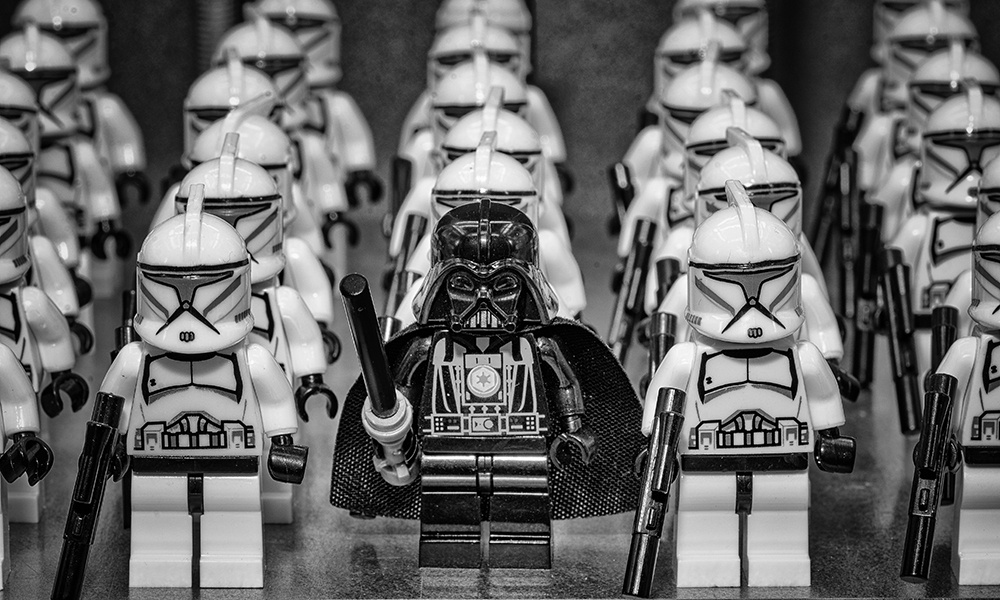 If we’ve learned anything from Indiana Jones, it’s that nothing is more satisfying than watching a Nazi’s face melt. Whether they be Nazis, the Empire, Hydra, or Sauron, fascists are easy and popular villains to incorporate into a game. Alongside zombies, dragons, and Cthulhu, are there more popular antagonists?

As we look around the world right now, we can see fascism on the rise in a variety of countries. It is a disturbing trend, to be sure, and it caused me to do a bit of digging into the appeal. After all, many ordinary people are being drawn to the allure of this political ideology. Why is that? Is this something that can be explored in my game? The answer to the latter question is yes!

Over the past couple of years, I have made fascism the subtle, creeping antagonist in my game. My aim has been to tempt the PC’s with the allure of fascism, and to give them frequent opportunities to stop its rise, but at a cost.

Before we go any further, it is worth mentioning that this sort of idea is not suitable for all groups or all players. Games have been designed with the intent of exploring more serious themes, such as Grey Ranks, but if you incorporate something like this into a more mainstream game it could blindside your players. Some people just want to punch Nazis in the face, and that is okay! Give something like this a try with friends you know will be up for it, and it is best to explore something like this in a longer campaign rather than a one-shot or a mini-series.

Step One — Create an Indifferent and/or Corrupt Ruling Class

My first step was to make a government that takes from the people rather than serving them. I created a Queen who was not overtly evil but was out of touch. She listened to self-serving advisors keen to exploit the general population for her own benefit. Even well-meaning policies were twisted around by those implementing them to the detriment of the people.

My next step was to create a crisis in the game. In this case, there was a drought and subsequent famine. The government botched the handling of this crisis and was pushed to the brink of bankruptcy. The population was gouged by wealthy merchants for food, which led to riots that the government was forced to put down. The crisis needs to lead to people suffering in some way, and it needs to be neglected or worsened by the government in order to foment rebellion among the population.

Step Three — The Rise of a Charismatic Leader

I next introduced an NPC as the leader of a movement. This is where the PC’s come in, as they have an opportunity to interact with the NPC. They are given a choice: support the existing government, help the NPC with a coup, or try something else entirely. The charismatic leader should be a double-edged sword; they are clearly helping the people, but they are very comfortable using violence to do this. Perhaps we can also get a look at how they handle those who publicly disagree with them…

In my case, it was an undead army, but what the threat is doesn’t really matter. The external threat to the nation adds pressure and urgency to the need for a regime change. Even if the current government wants to do something, their financial problems and disgruntled population prohibit effective action. The new regime can make grand promises and vow to protect the people, who will be persuaded by the lure of the “strong man” argument. Will the PC’s join with the coup, or resist it? Or will they try to remain neutral and pursue an alternative solution to the external threat?

One would think that the coup is the end of the story, but it is really the midway point. The fascist regime needs to come into power in order to save the nation from the external threat, which the current regime is clearly unable to handle. There should be mixed reactions to the coup among the people, with knots of loyalists forming to resist the new regime. The PC’s should have the opportunity to join in with the resistance, but at a cost. The new regime is happy to support the PC goals, provided they publicly endorse the Charismatic Leader. They have already seen how disagreement is dealt with by the leader. What will they do?

Step Six — Something to Blame

This is where the campaign takes a turn, and you want to gauge your group’s comfort level with the dark themes that lie ahead. If you think that you are headed into dangerous waters with your group, turn around here and maybe bump off your Charismatic Leader so that you can switch to a lighter gear.

The new regime should have plenty of groups to blame for the current problems: the resistance, the external threat, or perhaps a minority group of some sort. This is where things start to get ugly, with groups of secret police imprisoning or executing anyone who disagrees with the new regime. The Charismatic Leader needs to get money without admitting weakness, and the best way to do that is to steal it from the wealthy elites of the previous regime, which will please many of the people who were oppressed. Will the PC’s go along with the new regime, or will they risk having their own resources taken from them?

In my game, the orc population is the minority, and an undead army is the external threat. My next step was to give a rationalization for the upcoming atrocities: a wizard discovered a way to use the blood of orc magic-users to create potions to grant people resistance to undead powers. In truth, the blood of any magic-user could be used, but that isn’t the story he is selling. The ominous rounding up of the orcs and other enemies begins. If the PC’s haven’t gotten off the fascism train yet, they surely will now!

The Role of the PC’s

The goal of all this is, as always, to give the PC’s meaningful choices. When will they take a stand and risk their resources or other goals in order to stop the rise of fascism? Will the rise of this awful regime cause them to reflect back on the choices they have made (or didn’t make) that led to this situation? The goal is to shine a light on this slippery slope, to explore why this sort of thing comes about, and to show the importance of taking a stand against it, even when that is difficult.

When you implement this sort of storyline, there is the possibility that it will be triggering to some, so it is a good idea to discuss this with your players (hopefully without spoilers) to make sure that everyone is on board. Because you don’t want to get too specific about what will happen, you want to have a solid safety mechanism available (such as an “X” card or a “red-yellow-green” card system, as mentioned in this lovely Gnome Stew article). Lastly, you also run the risk that your players fully join the fascist regime and have no regrets. If that happens, maybe just find a new group because your players are terrible people.

I am keen to hear your thoughts! Do you think this theme is too heavy for a role-playing game? Does the idea of looking at fascism in this way make you uncomfortable? Have you tried to do something similar in your game?

4 Responses to Fascism: The Insidious Antagonist