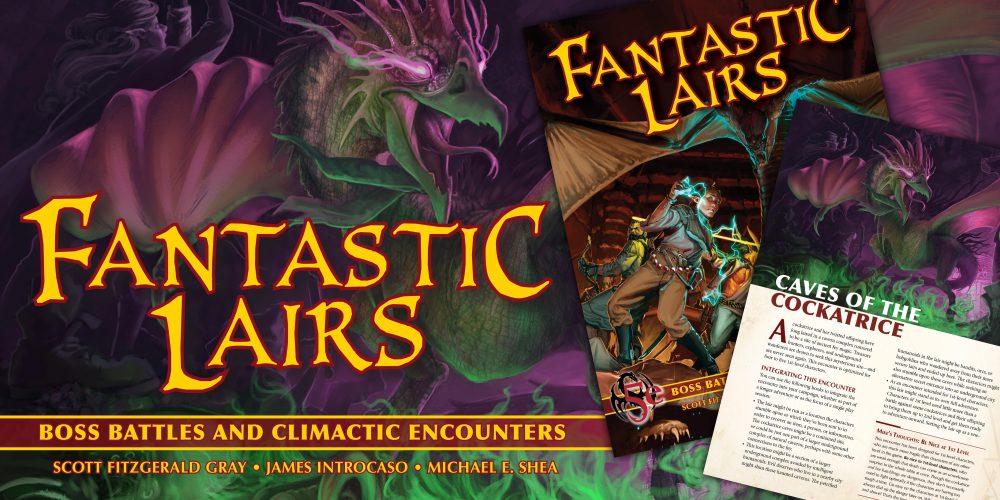 James Introcaso recently reached out to me to ask if I wanted to take a look at the upcoming Fantastic Lairs product coming to Kickstarter. This is a 5e OGL product that is a collection of climactic encounters and boss fights designed by James, Micheal Shea, and Scott Fitzgerald Gray. You can find the link here:

What Did I Get to See?

The preview sample that I received included the introduction, two example lairs, and the lair building advice section of the upcoming book. The artwork and formatting for this book look great. There are clear headers and sub-headers, easily discerned sidebars, and several half and quarter page original art pieces, including lair maps.

Anatomy of a Lair

The individual lairs include the following entries:

These hit a lot of my personal hot buttons for encounter presentation. I have seen a lot of strong well thought out encounters presented in adventures, only to have several key points buried in text that wasn’t formatted to highlight an important piece of information.

I’ll admit it, I’m an easy mark for bullet points, and this definitely employs bullet points to make sure you see the cogent details in various sections. 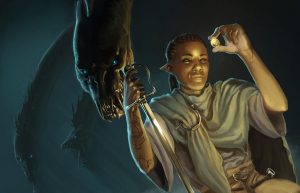 In addition to the standard format outlined above, the two example lairs have various environmental effects that might cause damage or inflict conditions. There are emerging elements of the lairs that may trigger based on player character actions or creature actions.

Several NPCs are included that have enough backstory to explain their appearance in the lair encounter, and may also give them some hooks to tie them to more campaign events. It was also nice to see antagonist NPCs with notes on how to interact with them beyond combat.

The encounter difficulty section doesn’t just list changes to hit points, armor class, or hit bonuses, or even the number of characters to change the difficulty. It also suggests thematic changes that allow the encounter to be used with slightly different creatures that might have a similar theme to the default creatures in the encounter.

In the example encounters, there are multiple ways included to pick up clues that might indicate an impending environmental effect, trap, ambush, or means of interacting and negotiating with an antagonist. There is a wide range of skills and proficiencies that will provide similar clues, in a way that seems contextual for how that information is derived.

In addition to the lair building advice sample provided, there are multiple sidebars included in the material that I saw that includes advice on low-level adventuring, expectations, and tone, determining the loyalty of minions in encounters, modifying existing lairs, and justification for why boss monsters do what they do. I’m always a fan of getting inside the head of the designers, both so that some decisions in the product will be more transparent, and so the reader can contextualize how much the designer’s priorities align with their own. 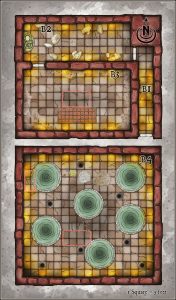 Interestingly, this particular product preview comes to me at this point. Not only have I had a lot more “boss fights” in my campaign lately, as my campaign is moving a bit closer to wrapping up, but I have also had recent discussions online about the delve format of encounters, which became popular in Dungeons and Dragons towards the end of 3rd edition with the Expedition series of adventures, and through most of 4th edition Dungeons and Dragons.

The delve format, for anyone that is not familiar, is a format that not only detailed encounter locations and added descriptions, but also showed the very specific placement of traps, environmental effects, and exactly where creatures would start each encounter.

I enjoyed the format, but felt it was overapplied. Because of the very specific way the encounter was laid out in this format, there would be a one or two-page image of each encounter in an adventure, which could eat up a lot of space. Additionally, it made every encounter feel as if it was intended to have a similar weight.

The encounter maps in this product do not appear to be as detailed as those in the delve format, but the specific headings that provide the bullet-pointed information on the lair, along with emerging lair effects, makes this feel like a more natural extension of what the delve format was trying to accomplish, and in this product, is only applied to what are intended to be climatic encounters.

That’s the kind of evolutionary development I enjoy in roleplaying games. Similar concepts, refined and adapted to more modern game technology and sensibilities.

In the introduction, the stated purpose for this product is to provide climatic encounters, boss battles, for 1st through 20th level characters. It is noted that most of these lairs are meant to be capstones, but in presentation, they can be single shot adventures by themselves.

Looking at the samples provided, both of the encounters detailed fit the bill. The 1st level encounter is noted as potentially working as a whole 1st level adventure, since 5e’s concept of 1st level is to very quickly introduce the PCs to the pain of being starting adventurers and then let them level up.

The sample adventures are 1st and 5th level, and both of them appear to have the functionality of capstones or one-shots that the player characters can wander into for a night’s adventure, but that makes me curious about the lairs for other tiers of play.

I’m interested to see this project develop, not just because I want to see 5e OGL content, but because this product is directly addressing a specific kind of game design. It goes beyond being an adventure, and is attempting to provide the specific feeling of a climactic battle. I want to see the tools at play to evoke this, and I want to see the thought process about different styles of climax.

I have always been interested, not just in games and adventures, but in the means by which we communicated shared ideas via games. In that regard, this product has my full attention.