Exiles of the Wicked Maze 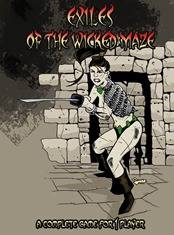 Recently we published an article by John Fredricks about how, as a GM, you should play now and again. This article has more or less the same gist. John’s point was that playing under another GM would help you perfect your technique. My point is that playing is fun, but that you don’t always have another GM to play under nor do you always have the time or occasion for a full formal 6 people around a table game.

Recently I purchased a copy of Exiles of the Wicked Maze by Fishwife Games. It promised to be a solo pen and paper rogue-like game, and it did not disappoint. The general premise is that you create a hapless prisoner, drop them in one corner of a maze, and guide them to the exit in another corner. Along the way they encounter monsters, other exiles, traps, treasures and other wonders. Hopefully by the time they reach the exit, they have accumulated enough riches to pay for their crimes.

In addition to a fun solo game, Exiles contains pages of ideas that can be stolen for your other games. In particular, the 13 page lore section has descriptions of all the traps, treasures and monsters found in the game ready to be stolen wholesale. This is no surprise from a company who has produced dozens of dollar pdfs with lists of 100 items of various types. Essentially you get a free list of 100 different dungeon encounters with this product. 20 potions, 20 mushrooms, 20 foes, 20 hazards, etc…

One thing that I felt was a little lacking in Exiles, however, was the fact that it comes with only 1 dungeon layout. It’s huge (48×60 squares) and all the encounters in the dungeon have some amount of randomness to them, so that’s not as big a deal as it might be, but I found myself wishing there were more layouts. I started working on a way to randomly generate dungeon layouts and populate them with symbols from the game, but given how massive the default dungeon is and how many symbols are in it (somewhere near 525), that task was a bit more work than was reasonable. In fact, considering the amount of work it would take to recreate a layout really hammers home the effort Fishwife games must have put into their product.

Luckily, I know a guy. Drow and I met on the Treasuretables.org forums back when that was still a thing. He’s a regular reader and commenter on the Stew and an all around talented guy. He runs donjon.bin.sh, home to all kinds of generators and tables. I bribed him a bit and he put together a random Wicked Maze generator. The results are roughly in the same distribution as the original but the random distribution can create results that are much harder or easier than a normal game.

All in all, Exiles of the Wicked Maze is a fun game, good for some quick solo play and easily worth the $6 asking price (there’s also a free expansion available that adds more monsters and treasures). It’s also a great source to mine for your games and a preview of the kind of material that can be found in other Fishwife products. If the above description sound interesting, you should give Exiles a shot.

6 Responses to Exiles of the Wicked Maze