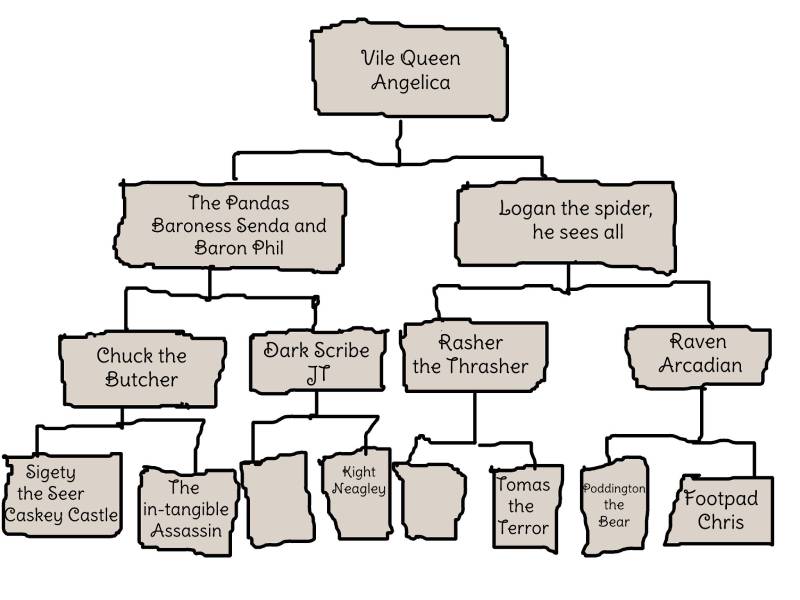 Evil Organizations are a staple of action adventure stories. They’re expansive, multi-headed groups that heroes fight against again and again. The villains are many, the schemes are devious, their reach is far reaching. I know. I know. It’s bad but true. And the other truth is their goal is setting domination. The Syndicate in Mission Impossible, The Umbrella Corporation in Resident Evil, and Virtucon Industries are just a few examples found in media.

Here I’ll be going over Evil Organizations as adversaries in your campaigns, what they consist of, why we might want to use them in our games, and how they can oppose our PCs. To start, let’s define some terms to help us all get on the same page.

What makes an Evil Organization

With that, we’ll move to stage two of our plan to dominate the world. Or at least let us make and use evil organizations in our games. When I asked the question “What makes up an evil organization?” I came up with seven parts which are now presented in no particular order.

A couple of examples are Szass Tam of the Red Wizards of Thay and the Light from Young Justice.

Wide reaching. These organizations have a wide reach, with their various enterprises extending to cover the entire setting of the game.

The Light’s members in Young Justice include Lex Luthor and his various business interests across the world and his global political affiliations, Vandal Savage and his political associations with off world entities and cosmic forces, and Black Manta for a time which gave the Light a hold on the regions of earth beneath the sea.

A Variety of Enterprises. The evil organization has various enterprises within the organization which always have an evil bent to them, or at least plan on doing something nefarious with the enterprises results. These enterprises can range from being terrible on the surface to looking positive to the general population. They always contribute to the goal of setting domination in the long run. Last, these enterprises provide various resources and opportunities to achieve the goals of the Evil Organization.

An international criminal organization would have a variety of enterprises contributing to their domination of the crime world. This could include drug trafficking, smuggling, theft, counterfeiting, blackmail, kidnapping, pyramid schemes, lawyers to help with any legal trouble, and troubleshooters to shoot trouble.

Structure. The way the enterprises are ordered along with how the leadership oversees that arrangement of enterprises provide the Evil Organization’s structure. There are many ways to do this: web maps, the conspiramid, org charts, you could even use an NCAA tournament bracket but that would be a huge organization. On the bright side, and this goes for any version of the org structure, you don’t have to fill out every part of it right away. You can leave some spots blank to fill in later.

Before moving away from the structure, I want to mention a few things this does for you:

A Set of Ideals. These ideals are crafted and handed down by the leadership. They might not be a part of every enterprise in the Evil Organization but should be in most of them. They can provide flavor for scenes, motivations for NPCs, a foundational piece for you to lean on when building scenarios, and can be used to subvert expectations.

Some of the common ideals evil organizations utilize are:

A common subversion of the ideals of an evil organization is the concept of honor – honor among thieves and being honorable to worthy opponents.

Minions. Every good evil organization needs minions because you need plenty of people to carry out the grunt work outside of the organization’s leadership group. Plus, you’ll want some minions who are trying to work their way into the leadership group. It also gives the characters people to punch, kick, flip, subvert, turn, talk to, grill for information, and hate kiss along the way.

These are the nameless faceless footsoldiers, cultists, stormtroopers, hordes of humanoids, or whatever comprises the bulk of your evil organization’s forces along with those named minions who play that middle manager role or fill that specialist job. Like your best troubleshooter who shoots trouble or your top lawyer who gets everyone they defend out of a sentence, or that scientist who keeps innovating on your drug production system, creating higher quality processes for your evil organizations drugs. Plus, you know, BANANA!!!

Resources. Organizations of this size have a vast amount of resources, such as weapons, vehicles, bases, safe houses, love nests, websites, and bunkers. Really, if they need it they probably have it, have some way to produce it, some way to get it, or a scheme or enterprise which will acquire it for them.

The Appeal of the Evil Organization

There’s a lot to like here starting with giving us GMs repeatable campaign villains. This is a huge villain group so they can just keep coming back to cause the characters problems.

You can take this huge villain group a step further by giving your organization a theme, like Cobra, and your evil organizations enterprises and minions can be variations on the theme.

Aside from being a huge organization, if you’ve created those seven pieces from above you’ll always have a nice foundation to build opposition from instead of a blank slate. It’ll help you be more efficient with your prep since you’re not creating things from scratch. You’ll also have more consistency in your game because the adversaries are the same while giving you the chance to make them slightly different. A nice theme and variation.

It also solves the problem of putting the bad guy in front of the characters early. If they kill a boss from an organization’s enterprise there’s a bunch more that can show up for any number or reasons.  They could take over the dead guys’ enterprise, seek revenge on the characters, be the next adversary in the chain of enterprises the characters are working through, or be that troubleshooter who shoots trouble – trouble being the characters.

I also believe this set up makes things less contrived than the Baroness von Badass, Baron von Badass’s twin sister, showing up to pick up the BBEG mantle.

There’s the benefit of simplifying things for the players, too. Having that singular antagonist to focus lets them focus in.

Before moving on I wanted to touch on the Structure again. It provides a nice road map to follow when creating connections between enterprises, scenarios based on those enterprises and the connections between them. It even allows for the campaign to be followed to a conclusion. Once the PCs get to the leadership of the Evil Organization and defeat them, the campaign is potentially over. Of course someone else could step into the power vacuum and assume the leadership role of the organization.

The Evil Organization as Opposition

An Evil Organization makes excellent primary campaign villains. They’re large with multiple members, have a variety of enterprises, and these enterprises have smaller goals they’re working toward achieving, which are all things for the PCs to deal with.

They can have multiple people in leadership roles allowing for a variety of opponents for the PCs to face off against. Then there’s the opportunities for the antagonist team-up. A couple different enterprises get wind of the characters shenanigans and it’s time to shut down some trouble makers together

Because you have multiple enterprises this means you can have multiple story arcs going on at the same time. It provides a lot of options for session creation.

A good chunk of this stuff means the players have multiple avenues to pursue. It also provides an enemy that everyone can unite against.  Even other enemies of the PCs, so you can have those enemy-of-my-enemy moments. But we have to ask one more question. Can this organization be defeated?

The characters will defeat the various enterprises, minions, and even some of its leaders repeatedly, but it’s worth considering the question of how and can this organization be defeated? This is especially important if the characters decide they want to pursue that.

Now that we’re done memeing we can get back to the defeat of the organization. If they’re beat it’s probably the end of your campaign. If you don’t want it to be the end of your campaign then you need to decide what will rise from it. Remember, power hates a vacuum and something or someone will fill it. Someone new will take over the leadership position, or a  former leader will reorganize the structure in some way. It’s a great time to change things up in your Evil Organization.

What you want to do is make sure the Evil Organization is familiar with one or two shifts in it. Maybe their ideals changed, or the reason they’re taking over the world is different, which changes how they operate. It’s good to think about those things and get ready to highlight them when the PCs run into this new version of the organization so they can feel the difference.

Evil Organizations fit quite well into the primary campaign opposition role. They do take a little bit of work to set up, but once you’ve done it you have a great resource to build out your sessions and scenarios from.

It’s a classic with a lot of examples in media if you need some inspiration and it can help solve a lot of antagonist generation just by the nature of the structure and the ideas it can help generate, plus, if you’re a fan of the previous Adversary Files episodes of the Misdirected Mark Podcast, they fit right inside this one.

Now tell us what are some of the Evil Organizations you’ve used? What were their seven parts if you can list them in retrospect? We’d like to know over here at the stew. Also, if you enjoyed this you can get a longer conversation about this topic over at the Misdirected Mark podcast. Episode 479, Evil Organizations.

While I did the primary writing on the script version of the Misdirected Mark episode and the conversion to this article, Phil Vecchione, Robert M. Everson, and Jerry Meyer helped with some of the rewrites and edits so I wish to credit them here.