My vow to never play another MMO was not the result of any bad experiences and I don’t have any horror stories to explain my departure from the game. I loved playing it and I created some awesome friendships with the people I played with. There was no drama in the decision, simply an understanding that the type of gamer I am and the type of game EverQuest was were not a good combination if I had any intention of having a successful life AFK (away from keyboard). There’s a reason the game was often called ‘EverCrack’.

When I started playing in early 2000, EverQuest had already been out for a year and they had just released their first expansion, the Ruins of Kunark. Someone I was romantically interested in was playing the game heavily and convinced me to give the game a try. Within a month, I’d out-leveled him and joined my first guild. I don’t play that many video games, but when I do, I play the crap out of them.

Like most fantasy based games, I started off with a rogue. It’s my go-to character class in almost any game I play. Though I didn’t really have any attachment to the idea of playing a Drow, or Dark Elf as EverQuest called them, that ended up being my racial choice. This was purely a pragmatic decision due to the only friend online at the exact moment I was creating my character having a dark elf character. It proved to be a wise choice since she was able to help me figure out how to get out of the canal I had inadvertently run myself into moments after creating the character.

I quickly learned that Norrath was a dangerous place. Venture into the wrong zone at the wrong time and you could find yourself back at your bind point, naked, with all your gear stuck on your corpse back beneath the feet of the monster that just killed you. If you didn’t remember to get yourself bound to new locations you traveled to, you could end up with literally hours of travel between where you died and the distant continent where you respawned. Pretty much anyone who played the game back in those glory days has stories of ‘Corpse Runs’ that were almost as epic and exciting as the actual content of the game. 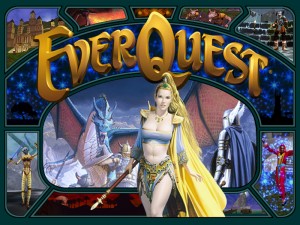 The Scars of Velious loading screen. It may have been my favorite expansion.

In addition to unforgiving level requirements, the original developers of the game had a ‘Vision’. They were adamant that true advancement in the game could only be achieved by groups of players banding together. Unless you were one of the lucky classes that could solo (druids, necromancers, shamans), which was considered an oversight by the developers, you were pretty much REQUIRED to be in a group to gain experience. Even when I was a 65th level rogue in the best gear you could get in the game, I still had to be careful in some of the lower level dungeons. All it would take was to accidentally drop sneak at the wrong time and I would get taken out by monsters that wouldn’t have given me XP even if I could kill them solo.

Of course, grouping could only get you so far. Eventually you’d reach a plateau you couldn’t get past – the best gear couldn’t be traded between players and was dropped by monsters that could only be killed by a full raid. Many expansions even featured a primary majority of content aimed at raiding guilds. If you weren’t part of one, then Planes of Power was a minimally useful expansion. You honestly needed 60-70 of your closest friends to truly make the most of the game. There was also no instancing so high end content was first come, first served. The faster, more organized guild would always win the right to the newest, most exciting content.

Don’t get me wrong. I loved playing EverQuest and I thoroughly enjoyed being part of Silent Redemption, my server’s high end raiding guild. There was an amazing rush of accomplishment and community in succeeding at beating nearly impossible encounters. Being there the first time Vulak was killed and North Temple of Veeshan was cleared, or being part of the team that figured out how to kill Quarm in the Plane of Time, was an awesome experience. In the end, my character was the second (or third) best equipped rogue on the server and I was proud of that fact. I won at EverQuest.

The down side was that winning at EverQuest took a lot of time and a lot of energy. Bouncing between various temp jobs and unemployment during that time period gave me quite a bit of free time to focus on getting really good at the game. After all, I couldn’t afford to do anything else with my downtime, why not play a game I really like with people that are pretty cool? The Catch-22 was that it didn’t leave me a lot of time to focus on getting a better, permanent job. I never once missed a day of work or skipped out on a social engagement because of EverQuest, but I definitely wasn’t giving those areas of life the attention I should have. When I finally decided I was done with the game, I vowed I would never play another MMO because I couldn’t afford to get caught up in the endless cycle of striving for the next achievement at the cost of everything else. I know it’s shocking, but some of us gamers might be a little competitive. 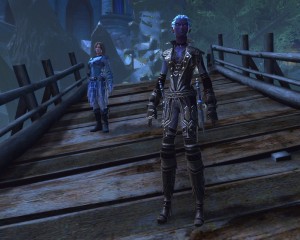 My Neverwinter rogue and her companion. What can I say, I was feeling nostalgic.

So, fast forward to the present where we find me breaking my vow to never play another MMO. I’d been considering it for a little while, but it took seeing that Neverwinter was free to download and free to play. I had been a big fan of the first Neverwinter Nights and its expansion (NWN2 sucked), so I decided to give it a shot. If it sucked or showed me that it would require the same time investment, I could easily step away without feeling like I was losing any money.

Two weeks later, I’m level 25 and still playing. It’s very much a different beast from EverQuest. I’d been told that MMOs had evolved, but seeing it firsthand is pretty interesting. While I don’t have other current MMOs to compare it to, Neverwinter feels more like a typical stand-alone computer RPG that just happens to have other people playing it at the same time. In some ways, it’s an extension of what I think they were attempting with the original Neverwinter Nights, but never quite achieved.

Most of the content I’ve been playing is designed for solo play, even with a ‘squishy’ rogue. Each zone seems to have a series of quests that are part of a singular storyline. Only the last, optional quest requires that you do it with a group. Most of the content is easily doable by a single character and their NPC companion (which you can get at 15th level). On top of that, there’s enough regular gear drops that I don’t feel like I’m lagging behind other players by not being able to access the best and brightest of the gear.

I find the game to be visually gorgeous and the zones are nice and big with plenty to explore as you follow the various quests you can pick up. While I’m not an expert on Forgotten Realms (the D&D setting Neverwinter comes from) it really feels like they’ve worked hard to capture the essence of the setting. It may not look anything like the city I explored in Neverwinter Nights, but there’s definitely references I get from that game and they’ve been true to the overall story changes in the setting. EverQuest had a rich mythology, but story was a distant second to overcoming or manipulating the obstacles in the buggy environment while defeating boss monsters.

Neverwinter isn’t perfect. Some of the interface controls aren’t as intuitive as I would like, and sometimes combat feels like a bunch of button mashing. I also finally gave up on getting the camera to function in a manner I’d prefer. While I appreciate having a companion to help out, I was spoiled by DragonAge, so I wish she was more than just a generic cleric with no personality or story line of her own. Being a game populated by other people, I have run into a rare but still present dickbag (like the idiot last night named BigTits who was emoting penis icons into the zone chat), but for the most part they’re few and far between and I can ignore them. In some ways, the game feels like it might be a little too easy, but right now, I appreciate it being a game I can pick up and play for a little while and put down without feeling like I’m losing value.

Ultimately, Neverwinter may be descendant of EverQuest, but they’re very different games. There might be other MMOs out there where giant power guilds still thrive and to feel like you’re getting all you can out of the game you need to play it like I played EverQuest, but I am glad there are now alternatives.

1 Response to EverQuest to Neverwinter