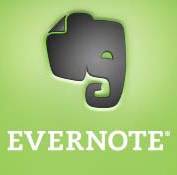 Evernote has changed my life.

No, seriously — I’m not exaggerating.

I have a spotty memory for some things, particularly random thoughts and ideas that pop into my head — they tend to disappear quickly if I don’t write them down as soon as possible.

And I get a lot of ideas. My mental back burners are running 24-7 — and I hate losing ideas.

I learned a long time ago to always have a notebook near at hand, and there’s a lot to be said for an analog solution. I keep a tiny notebook — a Moleskine Cahier — in my car, and another one at work.

But on the go, I don’t like carrying more crap than I have to. I’ve used the notes feature on my last few cell phones to capture ideas as they come to me, and that’s not a bad solution.

Once I got a smartphone, I started emailing them to myself instead. That way, I’d be forced to notice — and file — my ideas the next time I sat down in front of the computer.

Then I got an iPhone, and discovered Evernote. It’s not unique to the iPhone, and it’ll be useful to you as a GM whether you use an iPhone or not. But if you have a smartphone that can easily access Evernote, that’s really where it shines.

Evernote is a free note-taking application that syncs your notes across multiple platforms. The basic three are their website, your home computer, and your phone (if you have that option).

Once I signed up for an account on their site, and installed the desktop and iPhone softeware (both also free), I was set. Now, when I jot down a quick idea on my phone, it automatically syncs up with their website and my PC at home.

Wherever I happen to access my notes, they’re always “live” versions — no more keeping track of scraps of paper, notebooks, torn-out pages from those notebooks, emails to myself, and notes on my phone. No more manually “syncing” a single version of my notes on my own.

Now I just create a new note in Evernote (or add to an existing one), tag it to enable sorting, save it, and move on. It’s awesome.

Evernote also includes other features: you can post photos as notes, record voice notes, send notes via email, and more. The photo feature is worth describing in a bit more detail, though I haven’t used it yet.

When you save a photo as a note, Evernote will transcribe text it recognizes in those photos. So if you snap a shot of a book cover, it will extract the title, author, etc. and make that information searchable as well.

There are limitations to the free version of Evernote, though they haven’t impacted me yet; the paid version gives you more upload space and better encryption. I haven’t found either of those things to be an issue with the free version so far.

If you get — and forget — GMing ideas often, and spend a lot of your time near a computer or a smartphone, give Evernote a try. I highly recommend it.

Ahoy! I’m at GenCon, and won’t be able to respond to comments for a few days. I’ll catch up when I get back.

4 Responses to Evernote: The GM’s Best Friend for Note-Taking