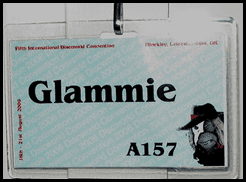 My latest game is a short miniseries campaign with a mix of new and old players. I planned it short to prevent GM burnout and to be able to interview new potential players. At the beginning of the game I asked for elements the players wanted to see in the game. Recurring enemies was a big one, but I had only planned this game out for 5 or 6 sessions. The players knew this but were pretty stoked for facing down some recurring villains. Being a big fan of enabling player fun, I decided I had to make use of this in some way, but with only a few sessions it would be hard. So what to do? One idea always strikes me about recurring enemies, and that is that they have weight and emphasis, feeling more on level with the characters than schmuck enemies (even mechanically tough ones) who just die after one combat. Since standard tactics for recurring enemies (keeping them out of the crosshairs, having them evolve, pulling off escapes) would be hard to make work effectively in a short game, I decided to give the enemies I would use some weight with one simple technique:

I gave the enemies reputations and names, increasing their status in the world and making them feel more worthy to the players.

I knew I couldn’t get away with throwing the same guy at the party every time and having him escape, so I made sure that the enemies I did send their way felt like a big deal. I made sure everyone had a name (or title) and that they had a reputation of some sort within the world. I also gave them thematic elements that made them stand out from other elements of the same type.

The Blackhawk Goblin Mercenaries
The game started with an almost immediate fight (protecting a plot hook NPC from some goblins) but instead of just using some regular schmuck goblins, I made them the Blackhawk Mercenaries, a group of for hire, “dirty job”, mean S.O.B.s who were known to the players with military or combat experience (after the players observed the goblin’s single black pauldrons with etched hawks heads and made a few knowledge rolls). They dealt with the 9 goblins they encountered fairly easily, but were left with the sense that there are more of the Blackhawks out there.

The Blackhawks were a thematic element that increased the immersion for that scene, but they also setup a bigger meaning for the encounter. Even though the fight was fairly easy,Â  the players had a lot of fun and the goblins were differentiated from run of the mill goblins because of their name and the reputation that I worked into the fight. Adding the “uniform” unified the idea of the Goblins and kept them from just being recurring schlock.

The Enemy
Alongside the Blackhawk goblins, I worked in another enemy. This one is only known as “The Enemy” and is some force working against the plotgiver NPC in a race for an artifact. The Enemy isn’t the real name of the person or entity, but it is what the plotgiver NPC calls him and it is what the players currently know him as. The Enemy’s motives are unknown, but his actions can be seen and he has hired the Blackhawk’s as his agents. Documents found on the Blackhawks have given the PC’s clues about The Enemy, but they don’t know too much yet. Keeping The Enemy out of the crosshairs but making his presence known, and revealing his methods and reputation through other means, evolves him before the final confrontation. Giving him an ominous name, seen through the lens of another NPC, and keeping him a little mysterious increases his allure and importance as the BBEG. Without these elements for players to focus on however, the feel and story of the struggle is diminished. Even a recurring enemy without meaning or substance is just a recurring mechanical challenge. The thing that makes the recurring enemy important is the fact that he can stand on the same level as the PCs.

Works For Non-recurring Enemies Too
Yup. Names and Reputations are great when used on non-recurring enemies and elements as well. The Blackhawk goblins could have been a throwaway and never come up again. With the name and title, they still provide the same trophy and sense of accomplishment. Defeating a minotaur is one thing, defeating “Cavorus, the bloody, sacker of Athiera” is entirely different, even if both have the same stats. Boarding an airship to travel across the continent is mundane but getting on the Silent Treader, the airship that broke the blockade around Machera is awesome.

The Great Thing About Names and Reputations, They Aren’t Hard To Implement
Names and Reputations are not hard to implement either. You need to come up with them, which only takes a few sentences of prep work that can be done at the table. You need to make them stick out, which means making them evident to PCs in some way. Finally, you will probably benefit in some instances by making the reputations relevant to other NPCs in the world.

12 Responses to Enemies Are Always Better With Names & Reputations