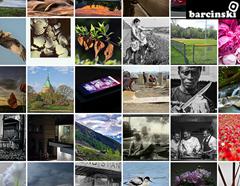 There is a class of creativity exercise called Random Stimulus. The basic gist of all of them is being presented with a new, random stimulus and then engaging in free association between the idea you are working on and this new stimulus. This takes a bit of practice, but it can be used to find new ideas or to enhance ideas already in use.

A great source of random image stimulus is Marc Barcinsky and Adrien JeanJean’s Endless Interestingness. This web page is an endless field of thumbnails of pictures from Flickr.You can move your mouse close to the edges of the screen to scroll endlessly and can click through to any picture. The easiest way to get a random image from here is to close your eyes, wave the mouse around a bit, and then click.

Here are some examples of using this technique for a few different purposes:

Adventure Design:
Clicking on a random picture I get a photo of dinosaur skeletons at a museum, So I start thinking about adventures featuring dinosaurs, saurials, undead dinosaurs, etc… Then I see the photographer has the following quote next to their picture: “We all have a dinosaur deep within us just trying to get out ~ Colin Mochrie” and that inspires me in a completely different direction. What if someone discovered fossils of sentient dinosaurs or dino folk and their ghosts, awoken by the contact start possessing people? There’s your adventure. The PCs are called on as monster experts or to escort one to this new find, but when they arrive, everyone denies anything unusual was found, won’t let them investigate, and otherwise acts suspicious.

NPC/PC generation:
For this I get a silhouette of a man standing above a fog bank. As awesome as this picture is, I get a pretty stereotypical character from it. Alone, comfortable in the wilderness, about to descend into a monster haunted valley, so I have a monster hunting loner ranger or scout type character, but that strikes me as too cookie-cutter ranger, so I want to tease something more out of it. The sun is setting, which could be coincidence or it could mean he’s been waiting there a long time contemplating going down, or maybe he’s the advance scout and he’s waiting for backup. Taking this into account, my ranger is far more sneaky than combat heavy and is more conservative when it comes to running into danger. He likes being part of a team, and left to his own devices, he often waits until the last minute to act, sometimes to the detriment of the mission.
As a side note, I like this photo for an adventure setting/world area so much, I saved it in an Evernote note for that purpose.

Location Design:
Here I get a picture of a rose. This brings to mind all sorts of locations. It could be a literal flower garden, mundane or fantastic. It could be an alchemy or wizard lab. It could be interpreted more symbolically, resulting in a knight’s chantry or the home of a notorious rake. Which to choose depends on context, but we’ll go with the simple cottage of a retired knight with a sizable garden which he tends both as a courtly art and to provide herbs, spices and other products to the local populace, especially those in need.

If you use Random Stimulus to inspire your creativity, what are some good sources of all kinds that you make use of?