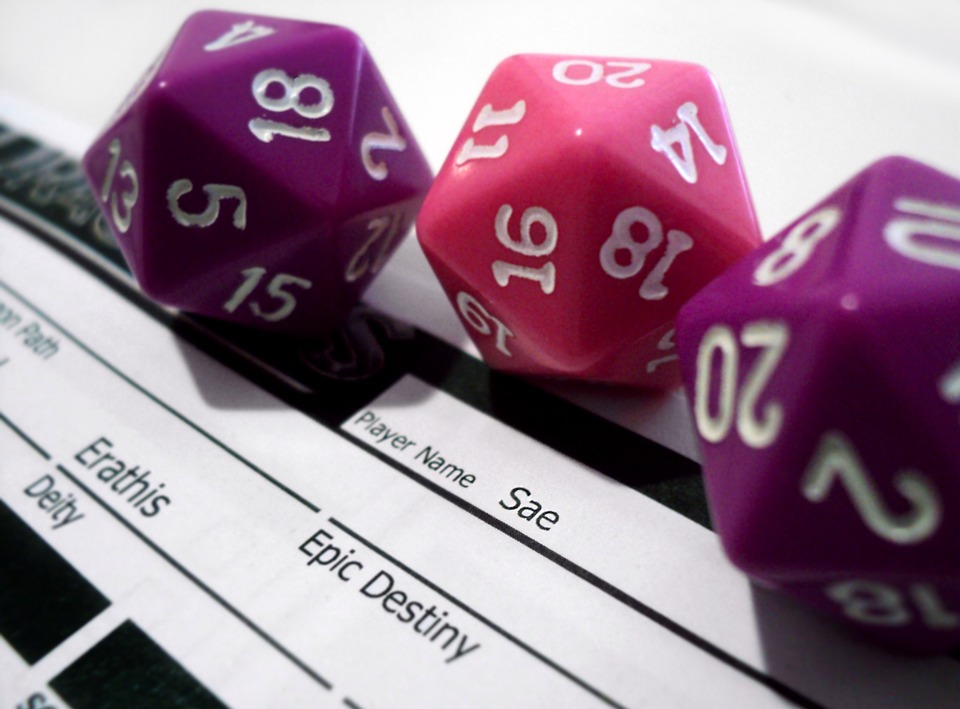 Not featured in this article: the game of collecting dice, which we all know is both important and entirely unavoidable.

There’s been a lot of ink spilled about the various kinds of players for RPGs and what they get out of playing: the tactician, who enjoys overcoming challenges through clever decision-making on the battlefield. The actor, who thrills in understanding and acting out the motivations of their characters. The explorer, who loves finding the secrets a game world hides. The significant other, who is mostly on their phone, but is willing to play a cleric, and doesn’t mind when the other players tell them how to spend their spell slots. The point is, there are a lot of different kinds of players, and they’re often time playing very different games. Robin Laws has written pretty extensively about it in Robin’s Laws of Good Game Mastering, and even Gnome Stew’s own writers have put out a book that does a better job of going through how to engage players than I’m going to bother to here.

This article is instead about the games you and your players are playing (or might play) that have, at first blush, nothing at all to do with the games themselves, but that can make a game epic by engaging them emotionally outside of the plot.

Taking Bids: The Game of Making Sure Everyone is Having Fun

I started here for a reason. Every other game in this little listicle is completely optional. But this one? This game should be occupying at least some of everyone’s attention while they’re playing. Not just the GM, not some of the players, but everyone. There are a lot of reasons why players may not pay attention to or value the fun other players are having: racism, misogyny, classism and assorted other bigotries it would be irresponsible not to at least call attention to spring to mind immediately. These attitudes are real, they’re ubiquitous, they hurt our hobby and our fellow players all the time, and hooo boy howdy am I not the person to talk about them. But there are also smaller failures: not noticing when one of the players suddenly disengages, or gets talked over yet again, or gets told “no” over and over and over. On the other hand, a group that pays attention to this game within a game is almost certain to have an amazing time, even if the game itself is steaming garbage.

There’s a concept called “bids” in conversation and relationships: verbal or nonverbal attempts to form a connection with another human being. They’re most often talked about with romantic relationships, but the concepts work equally well in gaming. Gaming is unique in that nearly every question, statement, in-character interaction, or request for a roll represents one of these “bids.” When we react to a bid, according to the researchers who coined the term, we have three choices: turn toward–acknowledging and reacting to the bid; turn against–denying the bid in an angry way; or turn away–ignoring the bid entirely. I challenge you as a player or GM to pay close attention to what the other players or the GM are doing. In a game context, when nearly every word is a potential bid, most of our fellow players (and GMs are players), are telling us “this is how I can have fun in this game.” That’s not to say that you should be saying “yes” to every harebrained thing that comes out of their mouths if you’re a GM, but that you should at least engage those things. In these cases, the absolute worst thing you can do is ignore what a player is saying, short of actually punching them I guess. Always, always, always engage when a player speaks up. When one player is hogging the spotlight, paying close attention to the “bids” other players are making can also be a great way to gently shift focus, too.

“That’s a great idea, and that sounds like a great long-term project for your character, but it’s not something they can do right now” works. “Absolutely, and also THIS happens” works even better. “While you’re doing that, it looks like Alex has an idea for what they’re doing” is another good one. Paying this kind of attention is constant work, and no one gets it right all of the time, but some of the best, most fun games I’ve ever run have consisted in large part of riffing off the bids of my players as they make them. Even and especially when it throws my plans, screaming, out the window. The great thing about being around someone who’s having a great time is that fun is infectious, so as long as you’re staying true to the assumptions, agreements, and boundaries you ideally set out at the beginning of your game, everyone has a better time.

So I have a confession to make. I love LARP. Love it. I’m not good at it, and it has its challenges, but I love it so much I sometimes try to sneak it in to normal people’s lives the way parents smuggle broccoli into brownies.

I love LARP. Love it. I’m not good at it, and it has its challenges, but I love it so much I sometimes try to sneak it in to normal people’s lives the way parents smuggle broccoli into brownies.
Luckily, murder mystery dinner parties are a thing. If you’re not familiar with them, they’re parties where everyone is assigned a character and relationships. Costumes are encouraged, as is in-theme food. At some point in the evening a “murder” occurs, and the attendees have to figure out who did it. There are props, high drama, and a big reveal. They’re just LARPs without a conflict resolution mechanic.

And yet, even when talking to the least nerdy people I know, I have never mentioned one of these parties without immediately having the person I was talking to jump down my throat wanting to know three things: 1) what was it about? 2) when is the next one? 3) can they be invited? There’s a simple reason for that: murder mystery dinner parties are hugely and self-evidently fun. And there’s nothing in them that we can’t shamelessly raid for our games.Â Let’s break down some ways we can bring some of this hotness to our games:

Carpentry and Dollhouses for Grownups: On the Value of Making Things

When I was a kid, I was really,Â really into miniature things: trains, action figures, model rockets. Honestly, just between you, me, and the whole wide Internet, I mostly wanted a dollhouse, but on the list of “things for a young boy in 1980s Kansas,” a dollhouse ranked well below “a fifth of Jack Daniels all to myself” in terms of likelihood of actually getting it, and right about on the level of “recreational public colostomy” for social acceptability. So I made stuff where I could, scavenged where I couldn’t, and built elaborate, if clumsy, dioramas to play with. When I build terrain today (which I and a lot of others are doing these days thanks to the quarantine), I find myself having echoes of that same creative impulse. Aggressively gendered stereotypes aside, the desire to make a dollhouse, an “action figure playset” and a miniature train setup are all fundamentally similar, and similarly powerful for some of our imaginations. The act of creating is fundamentally satisfying, and leaves something of you in what you’ve made. Leveraged right, these crafts can engage not just the person who made them, but the players as well, inviting them to engage physically with something otherwise only in their imaginations.

If building terrain and dungeons, or miniature design and painting aren’t your thing or your group’s thing, that’s fine. There are other ways this same impulse can be brought into gaming. Almost every time I play a game with an artist (which isn’t nearly as often as I’d like), they tend to sketch out their characters or others’ characters as we play. Writers will write out the stories. I’ve been in a game where one player wrote a song for her character on the fly and pulled out the guitar. Heck, bakers will bake amazing bread. This urge to create doesn’t have to be good or skilled to bring something amazing to your game. When you or your players feel the urge to do something with that impulse, if you encourage that engagement, pull it out and make it for the group, you will have met a bid halfway, and your whole game will be richer, deeper, and much more fun.

How do you engage your players emotionally? Sound off in the comments!