With D&D 4e out (and looking awesome so far [1]), I wanted to start building a collection of prepainted fantasy minis for future use. While I plan to buy some boosters as well, I figured I’d kick things off by ordering a host of cheap minis for representing PCs. Even if creatures get counters instead, it’s always cool when the PCs have their own minis.

Back when I was collecting Star Wars Starship Battles minis, I found a site I was really pleased with for ordering them: Miniature Market [2]. They shipped promptly and offered good discounts, so they were my first stop for D&D minis singles. 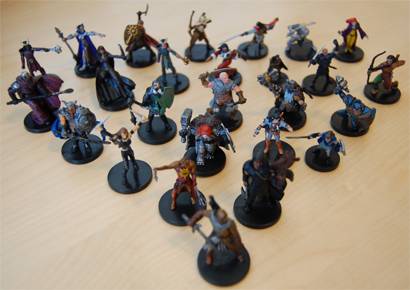 For about a buck a mini, I snagged 26 great PC choices for $27 plus shipping. I opted for a broad mix of races and classes of both genders, and chose versatile minis that could stand in for multiple classes.

Since I don’t care about them as pieces for the actual D&D Miniatures game (yet, at least), I found that common and uncommon minis could be had for $0.50-$2.00, most of them in the $1.00 range. That seems totally reasonable to me, and a whole lot cheaper than buying boosters and hoping for PC minis.

I know this isn’t exactly a news flash — D&D Miniatures singles can be had on the cheap! — but I thought it was worth sharing anyway. For about the price of a hardcover gaming book, I got over two dozen PC-suitable minis, and a nice start on my collection. (Next up will likely be a bulk order of cheap, common monsters like orcs and skeletons, and the few cheap PCs I didn’t snag this time around.) Though I bought them primarily for D&D, there’s no reason I couldn’t use them for any fantasy RPG.

If you’re in the market for cheap minis, I recommend this approach. What do you do to get your minis fix? Any other good ways to score useful prepainted minis in bulk?

this has always been my greatest failing as a role-player… I love role-playing, and dislike wargames for the most part.
yet i love to paint my own mini’s and unfortunately, it’s now far far cheaper to buy pre-painted miniatures (go figure)

Thanks for the heads up on the above site thoguh, very good prices, a lot of the reaper mini’s i like to buy, can be had from there for $3 – $4 instead of the usual $7

Im a big fan of grabbing some artwork in photoshop, sizing it to 1 inch wide, 2 inches high. Then copy it, flip the copy upsidedown. Now paste those two images into a 1 inch wide by 5 inch high picture, with half an inch at the top and bottom half.

Print out on a good printer, cardstock if you have it, fold it in half, glue, and bend the half inch tabs outwards, boom. Custom art on the ubercheap.

Like Rhev, I’m a big fan of grabbing internet art work and throwing it into MS Paint and chopping into an appropriate size. But I don’t bother with the cardboard standup step.

I have 8-10 players at the table, a flat token is actually easier for everyone to see. Claudio Poazas and Fire Dragon sell some very slick professionally made tokens… I bought one set, but have been making my own ever since.

I do find players respond better to having a proper miniature for their character however.

I was about to suggest the same thing as Rhev; WotC has most of the 3e Monster Manuals artwork online and you can use this to create cheap stand-ins for minis you don’t own.

I’ve also found small toys quite cheaply. Plastic army men are ten dollars per hundred and with a little paint and modification can make perfect bandits, orcs or hobgoblins. I’ve also seen toy dragons, suitable for a Large or Huge creature, for only Â£6; again, a little paintwork goes a long way.

If you’re not afraid to go outside of the official D&D Miniatures line, there’s a metric ton of castoff and forgotten MageKnight figures out there on E-Bay and castoff bins in gaming stores everywhere. Sure, their bases are a bit unwieldy and the paint-jobs usually are terrible, but the scale is right and you can get handfuls of commons for next-to-nothing (and the commons are just like the rares with a slightly different color shade). Just tweak the paint a bit to taste and you’re set! Also, since some of the figures are almost steampunk-derived, I find several of the figures work well in that genre, or slightly more futuristic ones (I’m using dwarf gunners in my Shadowrun campaign).

If you don’t mind unpainted minis or painting plastic ones, you can get an ample supply of cheap minis with some fantasy boardgames, especially if you can find them on clearance. The excellent game HeroQuest, for instance, not only landed me several useful D&D minis, but also stand-up cardboard furniture and dungeon dressing! I even found a blister pack of the figures for the game on a blowout sale at an old GenCon, and still use them. BattleQuest was good to me as well for units of foes. These are just some examples, but they’re out there, if you look for them, and you have the money to snap them up before someone else does.

If I could hijack the thread for a moment, I have a bunch of 7th Sea/Colonial miniatures that I’d love to get painted. Do you know of any reasonably priced places to get them done? (I’d rather not ship them overseas).

I built my D&D minis collection by buying between 2 and 4 Booster boxes of each collection since the release of the game.

I absolutely love them, and I now have stand ins for absolutely everything…

The 4e large dragons (There is a Silver, a Red and a Green in the current set) are absolutely awesome. You could also grab a large White if you DMed at the D&D Game Day.

Like Omnus I say go for the castoff bins at your FLGS or comic shop. Every year at Gen Con I buy old HeroClix and HeroScape minis for various games from vendors, and often I get about 40 minis for less than $20 and I find something for every genre. For monsters I look for clearance items when I take my kids to the toy store. For scenery I just make it myself.

Great way to get PC minis!

For monster tokens, check out [3]

I have two of the Master GM sets. I labeled duplicates with letters A, B, etc. They are nice and tough, well illustrated, size appropriate – good stuff and well priced for a bunch of tokens.

Walt: Those 7th Sea minis had some interesting sculpts. Good luck with finding a painter.

Walt, if your FLGS is like mine (hope so. Mine is awesome) they may actually have a set of store primers, paints and sealants that you can use if you come in at a certain time/day. Of course, that’s assuming you have some desire to paint them yourself which may not be the case.

I recently got a new Mini for our brand new 4E campaign (Thomas Hammerhand from Reaper minis. I chopped off his hammer, put on a sword and made him a kilt out of green stuff.) and the very basic paints I picked up to paint him with ran me $70. Of course, the next week my daughter and I ordered one for her and we already had all the paints (except a flesh tone and an ink).

Great stuff. I was thinking about getting cheap minis for my game but since I don’t play D&D minis was putting it off – I didn’t know or feel like finding out where to start.

I use ebay to buy lots of minis for mooks (“lots” as in “this lot of 8 identical Skeletons”, not “wow, you’ve got lots of minis”). I’ve thought about buying some glass/metal markers to differentiate them on the board.

I think the key to buying minis is to buy quite a few at a time, and save on shipping. Done right, you can get them well under a buck each, including shipping.

Another favorite is the “quarter mini bin” at Gen Con…

The answer I have for differentiating similar miniatures on the tabletop is to place a small paint dot of different colors or paint a number on the sides of the base, for ease, of each side.

I like color coding my minis. I’ve got buckets of old plastic Warhammer figs that I never got around to painting. If have, say, twelve Orcs… I’ll line the base of three in red, three in green, etc.

At low levels, four Orcs is about as many as I’ll put in a single encounter. So I can grab one of each color.

At higher levels the player can kill the orcs quickly enough and/or the battle takes place in a large enough space that I can use more than one Orc of the same color. I just seperate them with enough distance, or keep track of them mentally.

Of course, with paper tokens, I can simply type or hand write a numbe on each of them.

Another easy alternative to buying miniatures, especially for hordes of lesser creatures, is to use the miniatures gallery at the WotC website. There is a picture of each of the miniatures released. Except for the first few galleries, they are mostly scaled to size with each other.

If you need six extra skeleton minions, it is easy enough to find the one that you want, adjust it to the right size, copy it six times, and print.

Good suggestions all around — thank you! I like the idea of printing off cheap bulk counters or stand-ups.

@Walt: Nope, I don’t know anyone who paints minis in bulk. The one person I know, Gospog, does custom work one mini at a time.

I really wish my LGS had a bargain minis bin, or sold D&D mini singles at all, but no such luck. And I had to pick the year I decided to start building a collection to not go to GenCon… 😉

The last time I bought minis was more than 20 years ago. So, where do you find pre-painted PC minis for about a $1 each? I couldn’t find them at Miniature Market. But, as I said, I’m basically a newbie.