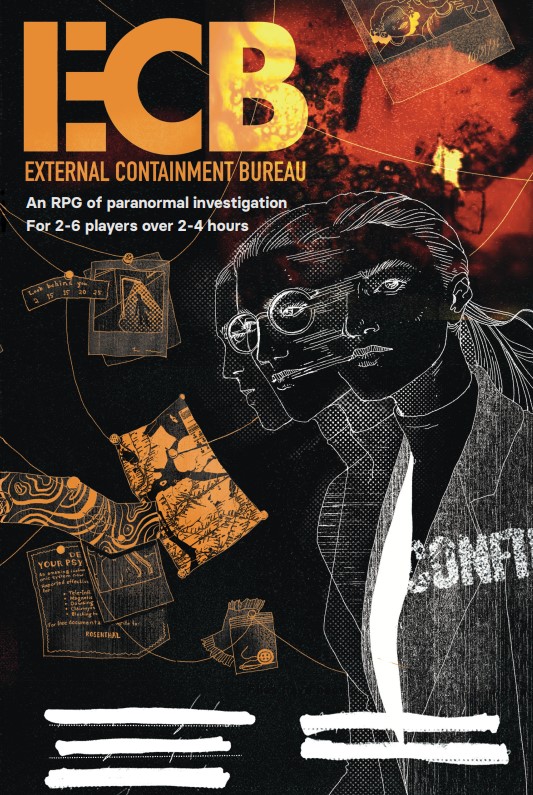 It may not surprise anyone to know that I am a fan of Hellboy, The X-Files, Men in Black, Fringe, and The Laundry. While I like my unaffiliated hunters like the Winchesters or Wynonna Earp in my monster hunting and investigation, I also enjoy the added storytelling potential added by monster hunter/supernatural investigative organizations. All the stress of hunting monsters, with the added frustration of bureaucracy. It’s a win/win!

I’m also really interested in seeing the different genres that the Forged in the Dark system can be used to emulate. Tracking down and containing supernatural phenomena seems well within the competencies of the system.

That was my thought when I backed ECB: External Containment Bureau–An RPG of Paranormal Investigation on Kickstarter. I’ve got my copy, so I thought this would be a good time to investigate this manifestation.Â

ECB is a 56 page PDF (in single-page layout). The interior artwork is black and white, with a single-column layout. Call-out boxes are in file envelope-themed boxes. Of those 56 pages, there is a title page, two pages of credits and legal information, a table of contents, and six pages of sample cases.

The game assumes that you are working for the External Containment Bureau. The organization contains supernatural and unexplained threats and phenomena and then covers up any evidence of what happened. Your characters are people who have interacted with the supernatural and have been recruited instead of misdirected. You are cut off from your former life, and you end up in one of the multiple departments.

Players pick a background for their character to represent their life before the ECB. They also get slotted into a department, which grants them some gear and a special ability. The departments are:

If you are worried about why some of these agents would work together, or if players may or may not want to join a given department, not to worry. Part of the process of being in the ECB is sometimes getting reassigned to new departments, while still maintaining contact with your friends to work on cases.Â

Because agents are often exposed to energies and psychic forces that other human beings don’t interact with regularly, they will eventually build up resonance. Eventually, resonance starts to grant you psychic abilities. The downside is that if you acquire too much resonance, instead of getting a neat ability that might help you on a case, you may become one of those threats that the ECB is called out to handle.

After a mission, characters go through a debrief, and depending on how they answer questions, they may acquire paperwork. If you accumulate too much paperwork, you may acquire reprimands, and the more reprimands you get, the more likely you are to have to deal with menial extra duties, disciplinary action, reassignment, or containment breaches.Â

Agents can participate in downtime activities, like connecting cases together to discover a conspiracy, filing paperwork to help lower your chances of getting a reprimand, pick up a new asset, complete a long-term project, or lower your resonance.

I like that the feel of this meshes its influences. I can feel the Men in Black vibes, but I can also see the more convoluted, internal agency tedium and secrets from something like The Laundry coming through as well. The backgrounds call back to multiple sources as well, and you’ll see some familiar backgrounds that hearken back to the X-Files and Fringe as well.

How Does This Work?

If you own Blades in the Dark, Scum and Villainy, Band of Blades, or other Forged in the Dark games, you may wonder how a 56 page RPG manages to reproduce the system. What facilitates this streamlining is that while the dice conventions are the same, the stats and special abilities are greatly slimmed down.

If you haven’t seen the core resolution system for Forged in the Dark, an action is given position (the potential repercussions of taking the action) and generates an effect (how much the action will get done). In many cases, progress is marked on clocks of various sizes, meaning that taking an easier, safer route to do something may have limited effect, and fill up less of the clock.

Characters roll a dice pool of d6s, and take the result of the highest die, with the following results:

More granular Forged in the Dark games have different actions that the players can take, which may have different ratings. The inventory system is open-ended but also detailed enough to provide some niche protection between playbooks. What streamlines ECB is that there aren’t individual playbooks or action ratings. Gear isn’t tracked in the same granular manner. Instead of deciding on how to approach a situation, you will be balancing doing things carefully and by the book, drawing heat from your bosses, to potentially facing death. Dice pools are determined by backgrounds, gear (which can be acquired or built during downtime), falling back on paranormal abilities, or following proper procedure.

Instead of standard resistance rolls, characters use their resonance score as the dice pool to resist a consequence. This represents the character using their supernatural abilities in some way to “fix” the situation, and instead of stress, the character will accumulate more resonance. As noted above, gain too much resonance, and you might cease to be a functioning human being, but without any resonance, it’s hard to resist consequences.

The game’s facilitator needs to prepare the following for a mission:

Once the characters go to the scene and look for some clues, the characters make a theory roll based on what questions they have answered during their investigation. This dice pool is used to set the first scene as the agents are trying to resolve the overall mission. It’s essentially the engagement roll from other Forged in the Dark games, but it comes at the scene, after some investigation on the ground goes, rather than gathering pre-heist data before the job starts.

The book spends time instructing the GM that they should discuss how serious the tone of the game will be, how action-oriented it might be, what the technology level of the agency is, and any topics that the group wants to avoid or exclude.Â

After establishing Technology Level, Genre, and Organizational Norms, the book then introduces Beau Sheldon’s Script Change safety tools. Not only am I happy that a game that’s only 56 pages long prioritizes safety at the table, but I’m also a big fan of that particular safety tool. There is a quick, bullet-pointed list of each of the symbols used in the toolset.Â

Mission Complete
I think this will appeal to players that are interested in seeing a Forged in the Dark game put through its paces to stretch what the original system assumes as its base. It’s an engaging read, and it presents its play loop very well.

I like this as a fun, focused application of the Forged in the Dark system to tell a tight story, with just enough variety to help players distinguish themselves. I like how the risk analysis includes juggling potential issues with paperwork and getting in trouble at work, as well as maybe getting eaten by a monster. It communicates the basics of the game’s resolution in a focused manner that makes it easy to follow.

Some great bits of personality shine through in the writing, but the same thing that makes the book engaging to read makes me wonder if it might be a little harder to shift hard into very serious mode. There is just enough humor in the presentation that I think that many tables may not hold on to the tone of the more serious X-Files stories, and might land somewhere closer to the Fringe to Men in Black range.

I think this will appeal to players that are interested in seeing a Forged in the Dark game put through its paces to stretch what the original system assumes as its base. It’s an engaging read, and it presents its play loop very well. The only caveat I would have is that if you like the more complicated interplay of action ratings, territory management, tier advancement, and other more granular aspects of other Forged in the Dark games.Â

What are your favorite supernatural investigation games that involve an “agency?” Do you expect those agencies to be on the level, or do you curse their sudden but inevitable betrayal? We want to hear from you in the comments below!