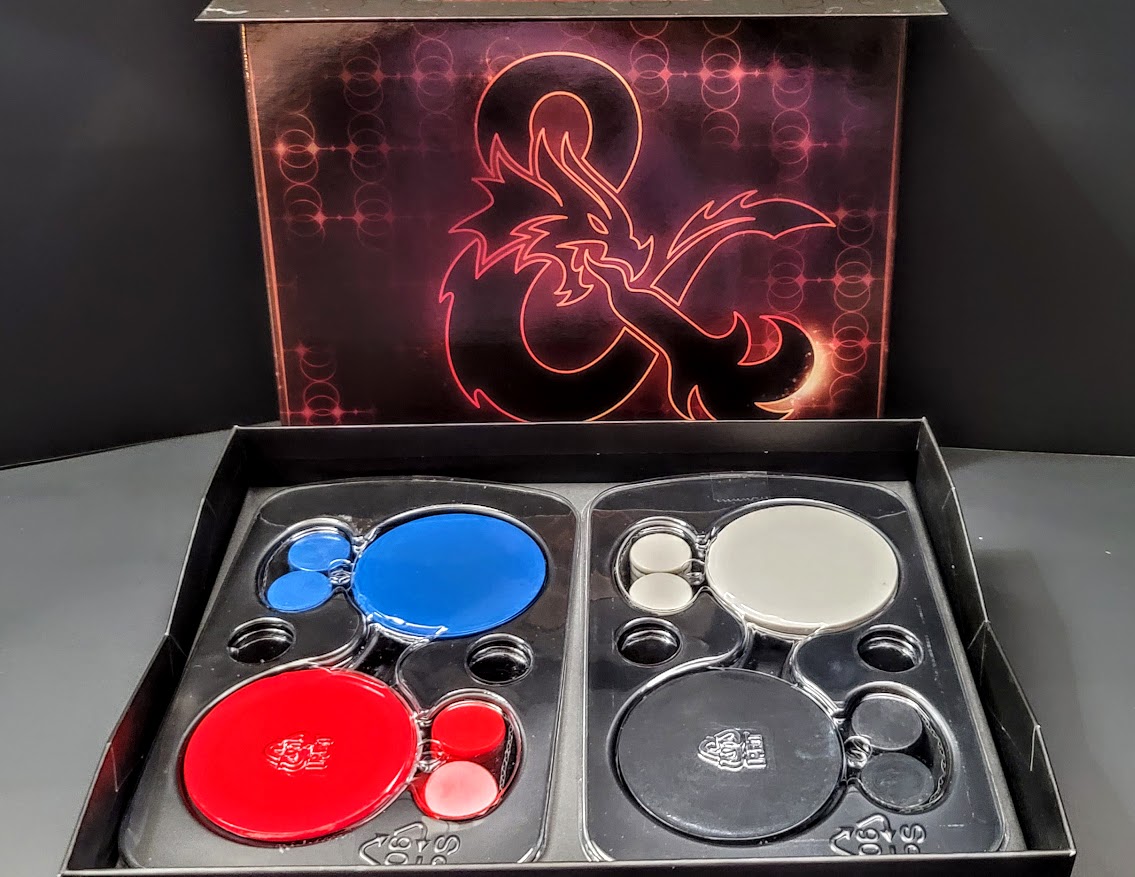 Today we’re going to take a little bit of a break from diving through rulebooks and take a look at a tool for running games at the table. As more games have provided additional tactical options, it has become increasingly important to have a way to represent position, usually on a grid. Even in games that don’t use a precise grid, it is often important to be able to track if characters are engaged with other characters.

Miniatures are absolutely wonderful, but they aren’t always the best solution, especially when the cost is factored into the equation. Sometimes it might be worthwhile to have miniatures of your player characters or the major campaign challenges, but all of those creatures in between can be difficult to find and expensive to collect.

I haven’t had a chance to use this product at the table, but that’s mainly because I don’t have any current face-to-face games. I did have the opportunity to take them out and use the various clings. I was not sent this set as a review copy, and I have not only used tactical miniatures before, but I have also written reviews that look at other non-miniature solutions for tactical placement in games. 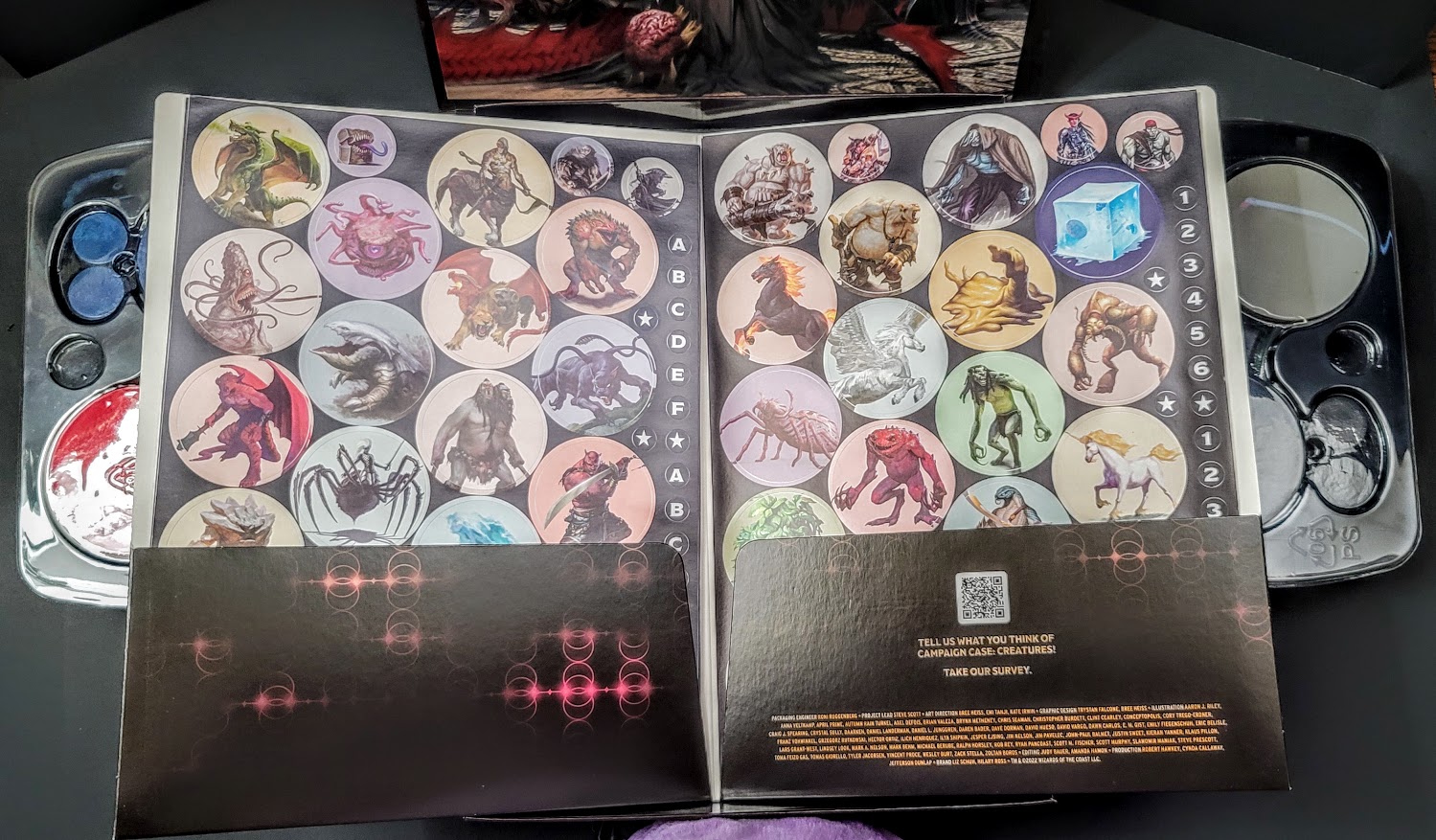 The Campaign Case itself is 2.21 x 9.21 x 12.09 inches and weighs about four and a half pounds. There are 64 total tokens in three different sizes and four different colors. There are five sheets of creature clings to adhere to the disks, and a folder to hold the sheets.

The case itself is really striking. The artwork on the individual clings is taken from various D&D 5e publications, sometimes utilizing artwork from adventures in lieu of using the artwork from the Monster Manual. For example, the Frost Giant and Hill Giant images appear to come from Storm King’s Thunder.

Not only is the case attractive, but it also feels solid. It has a rope handle and a magnetic closure. Inside the case, there is room for two individual containers with clear plastic lids, each one housing two colors of disks. In the center of the case, there is a recess that has the folder which holds the clings for this set. This section is deeper than it needs to be in order to hold the folder, which I’m assuming is an intentional nod towards expanded sets being stored within the case.

There are four different colors of disks, red, blue, white, and black. I like having the option of having multiple colors, although I would have almost rather had three colors, assuming “allied,” “neutral,” and “adversary” colors. That’s just my own preference, however.

When the product description says that the disks are weighted, they aren’t kidding. These are solid pieces of plastic, and they have a nice, pleasant weight to them. These don’t feel like they are going to accidentally slide across a surface with minor bumps or jostling. The colors are also bright and pleasant, and the disks themselves are nice and shiny.

So exactly how many of each item is included in the case?

I feel like there is always a bit of a trade-off when coming up with large-scale token offerings. There is a decision that has to be made between the breadth of creatures offered, and the number offered. For example, you rarely need more than one dragon for an encounter, but having run Storm King’s Thunder, it would be hard to come up with some of the giant encounters from that book with this set, given that there are only single example of the giants included. There is also a decent selection of “PC-ish” clings, but there are still gaps, and we definitely don’t touch on many of the newer player ancestries introduced to the game.

Playing in a tier 1 or 2 game, you probably aren’t going to need a gargantuan token or clings. But the higher level you get, the more likely you are going to need that really big token, and maybe some clings to represent those Tarrasques and Great Wyrms. I can see gargantuan tokens being offered later on, after WotC sees how successful this idea is, but given that the case is built for future expansion, with the extra room for more folders, there isn’t a good place to store gargantuan tokens if they are produced.

Final Thoughts
I don’t think anyone that likes the feel of a nice, heavy token on a map is going to be disappointed. It’s just that one case isn’t going to solve all of your problems in one shot.

I love these tokens. I want to state that upfront. They look great and they feel great. However, if we’re looking at just this kit, and not the concept of the tokens and clings, this set may not have the longevity that a DM may desire, unless they are supplementing some of their representational needs with minis or other solutions.

It’s a great broad selection, but it’s not a great deep selection, and I feel like any kind of solution of this nature is going to run into that problem at some point in the production process. I don’t think anyone that likes the feel of a nice, heavy token on a map is going to be disappointed. It’s just that one case isn’t going to solve all of your problems in one shot.

I would love to see future sets sold tied to releases. For example, a set of hypothetical Dragonlance clings that contain all of the clings needed to run that adventure. I’m not sure if that’s the way these will be sold, but it’s what I would love to see.

That said, we still need some additional sets to fill in the creatures that could use some additional support. I’m not sure if I would rather that be based on a broad or a narrow theme. For example, would it be better to see a set of giants, with all different kinds of true giants, ogres, trolls, etc. included?

It is also interesting to see that this is a solution that has a lot of competition. I don’t think this product is designed to replace miniatures. At best, I think a lot of groups that like miniatures might still get this as a supplement to them. However, the 2D acrylic miniatures produced by WizKids might be competing for the same space. This solution, of course, is an in-house solution, but does that make it more likely to be supported?

If you have the discretionary funds, or you are someone that has started down the accursed path of an RPG reviewer, I don’t think this is a bad purchase, but if this is still a bit of a squeeze on your budget, I would wait to see what kind of additional support this line is going to get, and how other creatures are released.