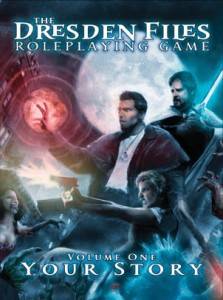 At GenCon I was one of the lucky few who managed to find a slot at a Dresden Table. Rubi was kind to me, I guess. I’ve been a fan of the novels for years, and separately enjoyed games by Evil Hat– in fact, I’m running a Spirit of the Century game right now. Those two things came together to make my first Dresden experience a great one.

I followed the development of the game erratically, but never looked too closely at its mechanics. Honestly, I figured that anything requiring all of those pages was something not to be casually mastered. The system involves two not small books; Your Story alone is 416 pages.

In some ways, my preparation for the game has been ongoing for years– long before the Dresden Files RPG was announced. That’s because Dresden is built on FATE, a FUDGE variant that has been around for about a decade. I stumbled across it a version ago, subscribed to the mailing list, and have been following its progress ever since.

I’m currently running Spirit of the Century, which is a 1920s pulp game built on the FATE chassis. I’m very kindly inclined towards it; running Spirit at the RPG meetup a few years ago netted me some good friends and a new game group– and was some of the most fun pickup play I’ve ever experienced.

Sitting Down at the Table

When I got to the table at the con, there were more people waiting for an open slot than there were slots altogether! Everyone who had signed up made it, disappointing (but not surprising) the players who had hoped to jump in. One or two hung around and observed for a while. Our GM had been a playtester, so he was experienced with the rules despite their recent release.

Once we were all gathered and ready, he passed around the characters and gave us a thumbnail review of each. This was very quickly accomplished thanks to two new features in Dresden: the High Concept and Trouble. The High Concept is a short phrase that sums up your character’s core concept, like Harry’s Wizard Private Eye high concept. In many ways, your Trouble in Dresden is very like your Issue in Primetime Adventures: be sure you pick an Trouble that you’ll enjoy addressing again and again. It’s very different from old flaw systems, where it was good to pick a flaw that wouldn’t interfere often– in Dresden you want a flaw that comes up frequently and is entertaining when it comes up. Our GM was able to summarize the characters just by reading off their High Concept and Trouble.

Because we were at a con, the characters were already built. The GM did a good job and provided a variety of characters appropriate to the game and setting. In this game, we were all playing werewolves who had formed a frat, Sigma Alpha Delta, together (in backstory).

We pushed the characters sheets around and talked a bit; soon my familiarity with the system made me outspoken. The other players soon suggested that Larry Talbot, the pack alpha, fit my personality well. The other characters were quickly selected and we were (almost) ready to roll.

Much like Spirit of the Century, characters in Dresden Files are interwoven during character creation. Normally, you have a “novel” and other characters guest star in it– so you have at least a bit of history and relationships with other characters baked in. For our session, the characters were mostly complete… but they had two aspects unfilled. Just like the guest starring of full Dresden character creation, those two missing aspects involved interrelations among the group– rivalries, trust, and suspicion. Having us complete those two aspects– and particularly the discussion that cropped up around our assigning of aspects– really helped us solidify our vision of our characters and the group as a whole.

We soon had our whole group set up with delicious interactions and ready for action. We got dropped into the first scene; which, given that we were a frat, was a big party at the tri-delt’s house.

As the GM described the scene, he wrote down a few scene aspects on a 4×6 card and placed it in full view so that we’d keep them in mind. A few players perked up when he described how tagging the scene aspects could be done; they immediately noticed how that reinforces the scene and encourages reincorporating elements in your descriptions. The few players who had never been exposed to FATE before nodded along, interested, and one chimed in “niiice”.

In the next scene, a cluster of harpies perched on an ancient oak tree and dive bombed us before returning to the tree top and taunted us, safely out of reach of us as enraged wolves. One of the new players had a “click” moment, where he studied the Aspects on the scene, had his character analyze the tree to throw on another Aspect, and set up our bruiser with four Aspects to tag– bringing the task of knocking over the ancient tree from almost impossible to “should do it unless the dice suck”. He was excited at the opportunity– and when it came through it became a touchstone for all of us as we pulled (and set up) “movie moments” throughout the rest of the game.

I liked the way that FATE was quickly accessible to new players– all we had to do was loan them dice and they were ready to go.

As werewolves, Dresden was straightforward– particularly since character generation was taken care of. Given the constraints of a con session, that was a good way to go. In fact, if your players are new to FATE, I’d suggest a one-shot with pregens. That way they’ll have a chance to experience Aspects and the system in play before creating a city and characters.

As we all experienced around the table, the book is pretty enough to incite lust. It’s huge, but compulsively readable– Billy, Bob, and Harry’s notes help keep the feel light. You can skip over them when you’re looking for a rule, particularly after reading them the first time– but they break up text very well.

If you like stripped down versions of the FATE engine, like Stuntless FATE, then Dresden’s moving the wrong direction for you. The stunts and powers chapters are extensive– very like the Stunts chapter in Spirit of the Century, instead of Diaspora’s brief take. That said, the powers are clear– and much of the chapter winds up being the GM’s responsibility more than a PC’s. If the GM knows those chapters well and is willing to help steer the players, the players can avoid a lot of complexity and never need to master more than their own character’s powers and stunts. Playing a werewolf was pretty easy since the stunts involved were straightforward– the primary complexity for a werewolf comes from building the second skill track, which the GM took care of for us.

Is it for you?

If you love the Dresden Files novels or already like FATE and want to run a modern day supernatural game, yes it’s perfect for you. If you’re looking at a different take on a World of Darkness type setting, you should check it out– if nothing else, High Concept and Trouble might make a good variant for Nature and Demeanor. Similarly, stunts might provide a new take on, or new examples of, merits. Aspects offer an interesting balance– instead of taking flaws that you hope won’t cripple your character, you select Aspects that you hope get in your character’s way… so that you have more fate points when the hammer comes down.

Want to learn more about The Dresden Files? Read on…

12 Responses to Dresden Files: Werewolves and Harpies, oh my!