Dread – Play It This Halloween (Trust Us)

Recently fellow gnome John Arcadian and I attended “Con on the Cob” where we hung out with the crew from Windmill Game Co. They are the creative power behind the new Dread: Tales of Terror series which are supplements that provide wonderful scenarios and questionnaires for the fabulous game Dread. 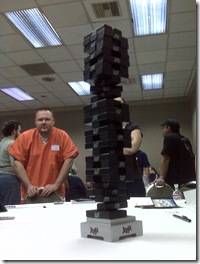 Now every year I run a very simple RPG for non-gamers around Halloween time. In the past I have used games like Fudge, or Savage Worlds. Both are simple and wonderful systems, and each can do horror well with a few tweaks.

Not this year. Probably not ever again. Nope, I will still play other RPGs butÂ  when it comes to running a Halloween game for anyone it will be Dread from now on. Why? Because there is no other game out there that can compare to the perfect blend of mechanics and design, easy to follow rules, and lack of typical RPG jargon that makes other RPGs less than appealing to most non-gamers.

I am not saying that Dread is the perfect game for everyone, but I do not praise a game like this often. I am friends with some of the people behind the game, but I was a fan long before I ever met them. The truth is that Dread is that good at what it does: provide you with an experience akin to watching a great horror movie. Your heart beats faster when you play this game!

You Probably Already Have Everything You Need

Dread uses a tower of blocks, the most successful commercial version being the game Jenga, and a questionnaire as a character sheet. So if you have a tower, some paper and pencils to complete questionnaires with, and this easy to follow quick reference you can run a Dread game.

Now I hope that you buy the actual Dread book and the Dread: Tales of Terror supplements, but you have to admit that games that you can play for a small investment are awesome to begin with.

Character Creation Is Easy Yet Precise

The questionnaires have twelve questions like “What have you been doing since you quit your job?” or “Why did you steal from your family?” and always end with the thirteenth question “What is your name?” That is all there is to it. Players just answer the questions in order and then hand them to the GM upon completion.

Non-gamers will not be confused by charts, tables, dice rolls, skill picks, etc. They just answer some leading questions and in no time they have a completed character that is as detailed as you need it to be as a GM. Yet the player has customized that character to their vision as well. There is an elegance to this character creation process that should be appreciated.

The Tower Provides The Fear

The tower is used whenever a character takes a risk within the game, needs to do something beyond his or her normal abilities, or attempts to take an action against another player character. A player makes a “pull” according to the rules of the tower game, and if the tower collapses that character is out of the game.

That is it. You as the GM simply describe the scenes to the players and ask for a pull, or perhaps several pulls when appropriate, and the tower does the rest. In several games that I have played, ran, and observed the result is always the same:

One hour into the game your players do indeed DREAD having to make a pull from the tower.

Hands shake. Sweat appears upon brows. Players hold their breath with terror when that tower starts to sway.

When was the last you played a game of D&D that had the same effect on everyone at the table?

Best Quality? Anyone Can Play!

We say this about a lot of RPGs, but the truth is that many complex rules system require a certain level of savvy with common RPG lingo and practices to really enjoy them upon first play. Without an experienced group a newcomer can often feel lost and bored while playing the game.

Dread is like the Wii of RPGs. Your grandmother can play it within 10 minutes of being introduced to it. Combine this with the openness of people to enjoy a good scare and the pitch of “It is just like playing Jenga, but with a horror story!” and you can easily launch a game of Dread at any Halloween party. Even the people who are not playing will get goose bumps!

This is the best part of a Dread game. Players, GMs, and observers alike become immersed into the story emotionally. Yet it does not matter if you have been playing RPGs for years or if this Dread game is your first RPG ever — everyone just naturally starts to play in character because of this palatable tension. You have to experience it for yourself.

Call Me If You Think I’m Bluffing — Play Dread

I rarely endorse a game so strongly, but when I realized at “Con on the Cob” this year that I was enthralled by every Dread game that I played and observed that singing Dread’s praises was warranted. In the interest of expanding our community of gamers, and because I love a good Halloween game, I wanted to be clear that Dread is the game that you should be playing this Halloween.

My special thanks to all of the Windmill Games Co. staff for explaining what they liked best about Dread, and to John Arcadian for his part in helping to shape this article. You all rock!

Have you played Dread? Do you have questions about the game? Maybe you know of a worthy adversary to Dread for the title of “Best Halloween Game Ever”? Leave a comment below, and remember that the GM is a player too. Have fun with it!

34 Responses to Dread – Play It This Halloween (Trust Us)