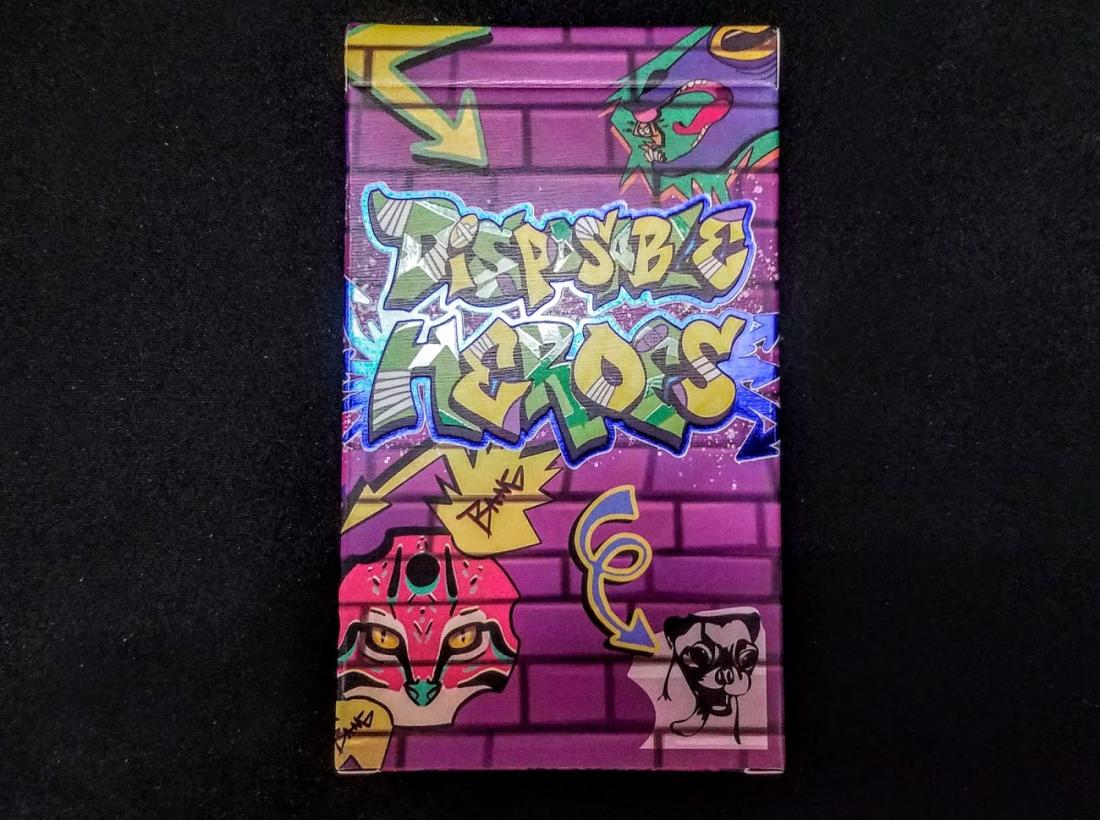 The game I’m reviewing today is non-standard in a lot of ways. It is a Powered by the Apocalypse game, but it doesn’t use playbooks. It still uses moves and a 2d6 + a bonus to determine the resolution of various moves, but the various cards you have will modify what unique moves you have available to you.

This non-standard PbtA game is Disposable Heroes, a game that borrows some of its artistic aesthetic from the 2000-era game Jet Set Radio. It’s colorful, chaotic, and tongue in cheek. But before we dive any more into what it is, let’s look at how the game is presented.

Disposable Heroes is available as a print and play PDF, as well as a physical deck of tarot sized cards. This review is based on both of these resources. There are 52 character cards in the deck, as well as one card with all of the special thanks, and six cards that summarize the game rules and the credits for the game.

Art is very important to the presentation of this game. The deck box, the first physical object you encounter with the game, is beautiful. The aesthetic is based on various graffiti images, most of which are on purple backgrounds. The title logo on the deck box is surrounded by a dark blue foil outline.

The individual cards have a name, an image, and an animal name on one side, and character stats, and a custom move for that character on the other side. 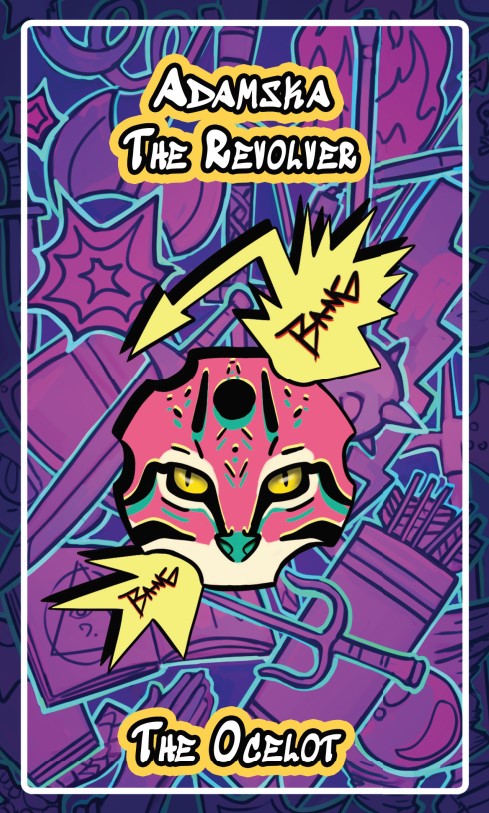 The basics of how to resolve moves and play the game are summarized on the rules cards, which include GM Moves and Basic Moves for the game. There is a very basic explanation for how this iteration of PbtA rules works. Unlike larger projects that spent more time talking about best practices of moves or game progression, safety, or the inspirations behind various playbooks, the deck based presentation is minimalist, referencing Dungeon World as it’s closest PbtA inspiration.

For those not familiar with PbtA games, all of the dice rolls are player-facing. Moves are specific rules modules that trigger whenever a player describes their actions in a way that aligns with what the move describes for its resolution. Characters have a package with a set number of hit points. Individuals have armor, and a specific die of damage they can deal.

When attempting to deliver their packages, the players run into opposition. If they take any damage and they have armor, they survive. If they don’t have armor, they draw a new card and begin playing that character. Upon delivering the package, characters roll 2d6 + the hit points that remain on the package to see if they get paid, have to explain themselves, or provoke the person receiving the package into a boss fight.

In the world of Disposable Heroes, multiple realities have collapsed, with the new world stitched together from wild, disparate universes. That means that Neo-Francisco, the city where the game takes place, is populated by whatever weird things you can picture from across various science fiction and fantasy settings.

The player characters are portraying people that work for the app Disposable Heroes. You get jobs from the app, telling you to deliver packages to various people across Neo-Francisco, while running into the kind of dangers you could picture from a world stitched together from a dystopian fantasy hellscape merged with a cyberpunk capitalist paradise.

Characters are meant to die frequently. When someone on the crew dies, the player draws a new card, the app assigns a new Disposable Hero to the job, and the new team member helps the crew make the delivery. Because life is cheap, it’s better to lose a team member than it is for your package to take damage, because if you don’t manage at least a four-star rating for your performance, the customer can just wipe the team from the face of the Earth.

I’m not going to go through all of the characters, with 52 of them in the deck. That said, I wanted to highlight a few of the mechanics that make each character unique.

The Basic Moves in the game include the following:

That’s the general toolbox that will make up the resolution of most stories and deliveries. Some of the specific moves that individuals provide include some of the following:

In addition to the name, stats, damage die, and custom move for each character, the back of the cards provide a personalized image, as well as the name of an animal. Because the setting is meant to be loosely interpreted and able to contain just about anything you can imagine, this animal might be the character’s personal symbol, or it might literally be what the character is.

When you slam together multiple failing realities, you’re going to have some anthropomorphic animals in there somewhere. Whether your character is an animal, or just really associates with one, characters are assumed to be able to do special things only associated with an animal without making rolls. For example, The Otter can swim without any effort, and The Squirrel can climb trees like nobody’s business.

I mentioned that the rules summary gives the broad strokes of how to utilize the rules, but without the deep dive into PbtA philosophy that other games provide. Some of this is because it refers characters to other PbtA games for greater nuance, but part of this is also because the game is largely designed for one-shot play, without deep campaign level play.

Disposableheroes.sandypuggames.com has more information on the setting of the game, as well as providing the rules in a webpage format, instead of the presentation on the cards. While there is definitely enough in the deck to play a few one-shots, the additional setting information included on the website provides more material for someone who is looking for inspiration beyond the basic paradigm framed on the cards.

The physical deck is gorgeous. I’m very happy that I picked up the physical product. Even with the wonderful artwork in the print and play deck, there is nothing like seeing the colors pop on the printed cards, and even the box is a sight to behold.

It’s harder for me to assess now that I’ve read and played so many PbtA games, but for people unfamiliar with the game, the minimalist game presentation may be harder to pick up. Even though the game points you to other PbtA games, your mileage will vary whether you want to consult an outside source to fill out your knowledge of the game.

If you love card-based products, and you appreciate bright, colorful, vibrant art, this is going to be a much easier decision for you. If you are new to PbtA or just tend towards more complete rules presentations, or if you aren’t inclined towards games geared towards one-shots, this may be less satisfying.

What are your favorite games to play when your regular RPG night doesn’t go as planned? Do you play RPGs, or do you look for other games to fill that gap? Do you like games that are presented entirely in card form? We want to hear from you in the comments below!