Advantage Vs Disadvantage – How the numbers stack up

The new 5th edition of Dungeons and Dragons has tweaked some of it’s systems somewhat. One of them is the new advantage/disadvantage system which replaces the system standard plus or minus 2. In addition, advantage and disadvantage doesn’t stack and any amount of each cancels out the other, so if I have disadvantage already, I might as well pick up as much of it as I can: it won’t hurt anything, and if I have disadvantage from five sources, I can level the playing field by burning a single ability that gives me advantage. This sounds easy, eliminates a lot of the fiddly “did you remember the +2 for this, —1 for this, —2 for this, and +1 for this? Oh yeah and flanking, total bonus is… +2” and is likely to encourage players to pull out all the stops (or allow GMs to pile on ridiculous situations) since they no longer stack.

“I have to shoot an arrow and hit the lever on the other side of the 100 foot wide chasm to lower the bridge? That’s disadvantage because of the range. It’ll be hard. What? I have to do it in a heavy crosswind, hanging from a rope with one hand, nocking my arrow with my teeth while the kilt of the flatulent dwarf dangling over me blocks one of my eyes? Meh. it’s not like it’s any harder that way.” — disadvantage at work

The main problem with this new system, from my perspective, is that it’s not as simple to wrap your brain around what having advantage or disadvantage means as the old system. For example, under the new system, I can make a halfling warrior that swings around a greataxe twice as long as he is… but all my attacks have disadvantage… Is that worth it? I can also use armor I’m not proficient in, but I get disadvantage to all rolls involving strength and dex. Is that worth it? (Short answer: No. Almost never worth it.) I wanted to know for my own benefit, so I did all the heavy lifting and here are the results:

First, what is the probability of rolling any given number on a d20? What are the chances if you add a +2 and what are the chances if you subtract —2? That one’s easy. If you can actually roll the number, the probability of rolling it is 1/20. What adding and subtracting 2 does isn’t change the odds of rolling a particular number, but instead changes the numbers you can roll. I’m not going to graph those odds. It would look like three mostly overlapping straight lines. Not terribly interesting.

What about advantage and disadvantage? First, unlike the Â±2 solution, this new mechanic doesn’t change the numbers you can roll, which is nice, only the chances of rolling them. With advantage, the probability of rolling a 1 is a lot lower than usual .05. It’s .0025, one twentieth of normal. The probability of rolling 20, on the other hand is almost double the usual .05. It’s .0975. With disadvantage, these numbers are reversed. 20’s are almost impossible, 1s are twice as likely as usual. This one I will graph: 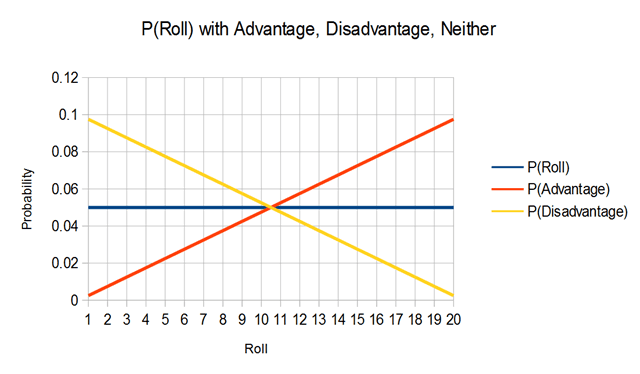 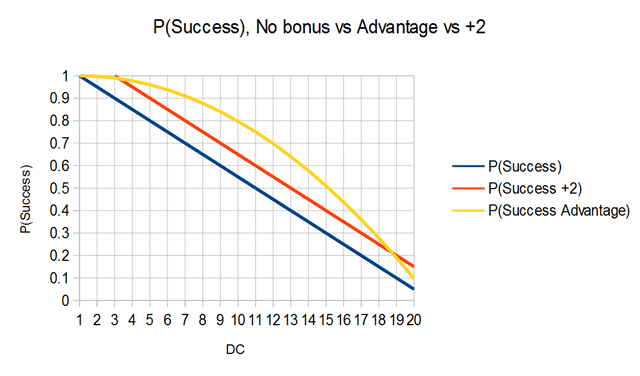 You can see from this graph that the probability of success from adding 2 to your roll is always the same 10% bonus, but the bonus granted by advantage isn’t static. It’s highest in the middle and lowest on the extremes. vs a DC 11, it’s a 25% bonus, the same as a +5 on your roll. At DC2 and DC20 advantage is almost equivalent to a +1 bonus (+.0475 vs +.05). on average, the bonus advantage grants is +.16625, a little over a +3 bonus (+.15). From this chart it’s hard to argue with the conclusion that advantage is better mechanically than the +2 bonus, but keep in mind that the area where advantage falls down is precisely where you need it. It adds less probability of success than the +2 bonus for rolls vs DC 19 (+.09) and 20 (+.0475). Where advantage truly shines isn’t in moving a poor chance to a reasonable chance, but rather turning a 50-50 chance into a good chance. 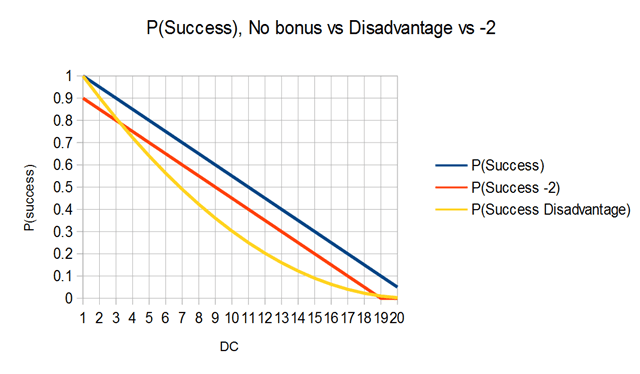 So taken as a whole, the advantage/disadvantage system has little impact on extreme situations but can have a large impact on middle of the road situations and is on average larger in impact that the system in use in earlier systems, so work to get advantage and avoid disadvantage when you can, even more so than prior editions. This change may have some interesting implications for common play styles and the overall mathematical systems of the game.

P.S. If you’d like to see the spreadsheet I used to make those graphs (plus a bonus graph!) here’s a link to it.

20 Responses to Advantage Vs Disadvantage – How the numbers stack up