Di’s 7 Swords – The 1st: Resolution Mechanics Must be Fast 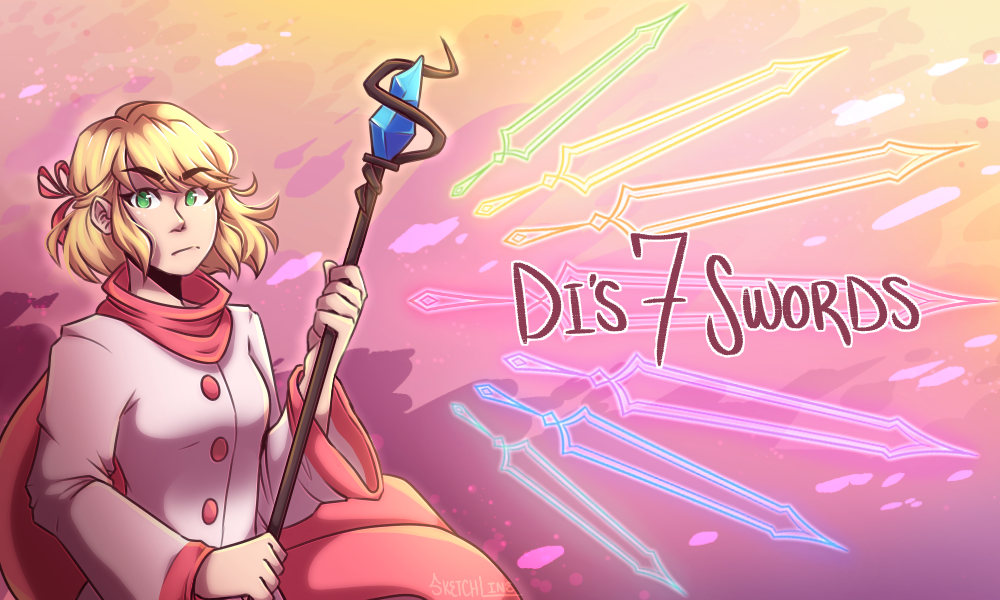 *Di’s 7 Swords is a collection of views, opinions, and her overall stance on what elements make good Tabletop RPGs. These are by no means absolute catch-alls, and simply reflect a single person’s beliefs.

Preamble
[The 1st. Resolution Mechanics Must be Fast]
The 2nd. Endless Depth in Customization
The 3rd. True Strength Lies in Simplicity
The 4th. Dissociated Mechanics are Fine; Fiction is Cheap
The 5th. Agency is an Illusion; Slay It or Play to It
The 6th. Chase the Consequences to their Limit
The 7th. The GM is a God to be Slain. 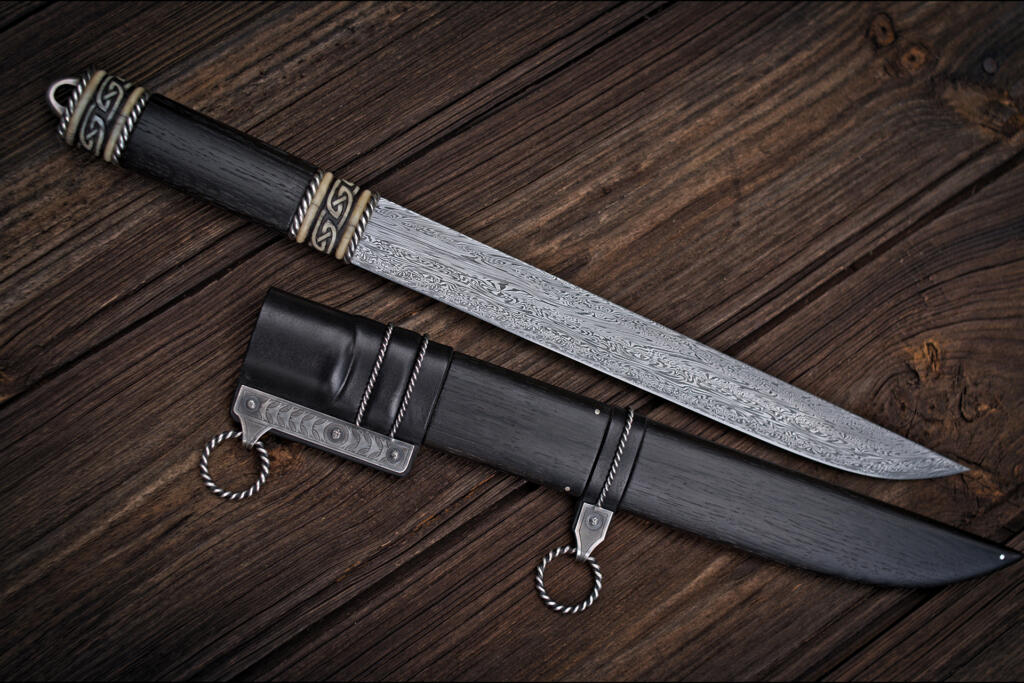 A rad knife from Northmen.com

Resolution Mechanics Must be Fast

If I had to lean in on the Sword metaphor, my 1st Sword is by far my most reckless of the bunch. It’s hard to defend with, as there exist many games here and there that are all about the long and poignant moments between your actions–games that emphasize counting all our bonuses and conditions before giving you the final result. But my 1st is also perfect to attack with, as there is very little to guard back with it. If I had to give it a shape, it’d be a viking seax. Simple and cutting, and lacking a guard to protect itself.

The 1st Sword is simple: when you design a game, whatever conflict resolution mechanic (CRM) you decide on MUST be fast enough to execute immediately.

What this means is that when you decide to play your card or roll the dice, you should have a rough estimate what the result is the MOMENT it drops. Not counting modifiers, weird rules or conditions, or anything else in-between. It should be unambiguous and, hopefully, you shouldn’t be referencing any tables as you do so either.

Furthermore, when a conflict arises and it is decided that you need to resolve it, the point from “I need to do x” and “resolving x” needs to be as short as possible. If it takes a player more than a minute to gather all the dice they need to roll (for example rolling 3d6 for base, +2d6 for a skill and +1d6 for a boost) then the game better be only using the same type of dice. If you’ve ever dealt with a player having to either find all their relevant dice after referencing their sheet, or having to outsource and borrow dice from everyone else, then you know what I’m talking about. Anything more than 30-seconds feels too long, let alone having to handle everyone taking 1—2 minutes per die roll.

For the sake of representation, X is the event in which you actually attempt to resolve the conflict. For many games, this is rolling dice or drawing a playing card. From this, there are three possible points for the conflict resolution to lag at, ‘Before X,’ ‘During X’ and ‘After X.’

Before X is the amount of time it takes to reference and gather all the rules necessary prior to a roll. This is looking up which roll or (in Powered by the Apocalypse) this is looking up which move you are using. For ability heavy games like Dungeons & Dragons and Pathfinder, this is where the Wizard – upon their turn starting – often decides is NOW a good time to open up their spellbook and choose the perfect spell to use.

During X, as stated earlier, is when you actually do the action, and obtain a result. For the most part, I use ‘roll’ generally as it’s the most common (and simplest) form of conflict resolution. There are definitely games out there that require longer elements such as drawing a face-down card from a person’s hand. This specific example leads into an entire sub-game where you need to read the opponent before drawing the card. There are most certainly games where this is the whole point (for a board game example, Sheriff of Nottingham is perfect). Us dice rollers often take this step for granted, though if you’ve ever had trouble with players rolling on the table or rerolling, During X can still be affected.

After X is the amount of time in your game for you to figure out what Event X /means/ and how it is to be affected. This is simply known as ‘Interpreting the Result.’ If you’re in a game with modifiers, this is where you add them to the dice. If you’re in a game that uses Armor Class/Difficulty Check (ACDC yeaaaaah), this is where you check them against the number to beat. If you have a penalty from somewhere, this is also where it applies.

Slower resolution can actually do a lot to affect tension and mood in game. However, if it’s slow at all three points of Event X, then the entire game becomes a slog and will drag on exceptionally long. The most common gamemastery tips when it comes to speeding up your game involve getting your players to think about their turns beforehand or rewarding fast declaration of their actions. It’s also often about getting your more anxious players to not spend their turn going “if I do this, what will happen” for about 20-minutes. This is about reducing the amount of Before X events, which can work, but do nothing to really affect After X events.

This doesn’t even take into account the overall pace the GM might have, the players might take in roleplaying, or even the delays anyone might have in just deciding what to do. Add in online Virtual Tabletop issues such as lag, connection, or just figuring out /how to roll/ your dice, and you have a million points where a game can slow to a crawl.

Note: there’s nothing wrong with roleplaying, as that’s all part of the story-game, but imagine dealing with everyone roleplaying without you because you’re not in the scene.

If you’ve read my past articles or (by the Gods, forbid) my Twitter, you might know that I’m particularly critical of 5e for its pace. Combat in 5e tends to take forever for me, and I’ve had games where players can take anywhere from 1-15 minutes per turn, and a round of 7 players and a bunch of creeps can take up to 45-minutes just to get back to me. Why is that?

Dungeons & Dragons, as a whole, tries to be a particularly robust game. This means there are unique abilities, effects, and conditions, as well as the creatures using them. Lets use an Event-X Template.

When you succeed in 5e rolls, you actually have more to check (abilities/resistances/vulnerabilities/conditions). When you fail, it can typically stop after modifying the result, checking AC/DC, conditions, and dis/advantage. For 5e, failure is the FASTER result, which is odd as speed is supposed to be a favorable result.

Part of what I found so interesting about 5e was its dis/advantage system, because it was able to remove more complex conditions and replace them with dis/advantage. Rolling dis/advantage is a During X event, and it often results in more immediate knowledge of success and failure. Because advantage bumps a Nat20 from 5% to 9.8%, you’re more likely to see a Nat20 and to have the GM just ‘hand wave’ a bunch of steps.

Advantage actually moves the time burden from Before/After X events into During X, which is way easier to resolve.

D&D, however, loads a lot on Before/After X events. Even if you find ways to quicken the game for your players, it doesn’t change that the system itself is designed to be bulky and slow. As I covered before, the most common tip for gamemasters is to get the players to think about the Before X events. Despite all the changes and shifts towards simplicity, as it is touted as the most ‘streamlined’ edition of the game, it’s unable to completely avoid the weight bulked on After X events. Unless that itself gets fixed, Dungeons & Dragons is always going to be slower than its contemporaries.

Whatever CRM you ultimately decide on has to be fast enough that the During X event is as quick and painless as possible. Things like having to redo (reroll) the During X event shouldn’t be a pain in the ass and, instead, be something fun to look forward to. A game will always have things in the Before/After X, so that’s not something I can particularly critique. However, reducing all sides of the equation (even the inside), can always speed up the game significantly.

Game Speed is imperative to controlling the overall pacing. At the end of the day, no matter how many techniques you might have to speed up the game and handle the players, you’re never going to really be able to outpace the rate in which the game resolves its conflicts. It’s like attempting to run a mile in weighted clothing; unless you unburden yourself and reduce the mechanics slowing you down, the amount of effort you put into it will always result in sub-optimal results.

And with that, I hopefully put away my 1st Sword. I hope you’ll stay tuned for the rest.

3 Responses to Di’s 7 Swords – The 1st: Resolution Mechanics Must be Fast